‘Aftershock’ from devastating 9.0 quake that hit in 2011, shakes Japan

CNN Tokyo, Japan (February 14, 2021).- A powerful earthquake that hit Japan on Saturday was an aftershock of the devastating 9.0 magnitude quake that struck the same area almost 10 years ago, according to the Japanese National Meteorological Agency.

The 7.1 magnitude earthquake struck the country’s east coast at 11:07 p.m. Saturday. At least 48 injuries were reported in Fukushima and Miyagi prefectures, according to state broadcaster NHK, but there were no major casualties.

The epicenter hit about 46 miles (74 kilometers) northeast of Namie, a coastal town 60 miles from Fukushima, according to the United States Geological Survey. The earthquake measured about 36 miles in depth. No tsunami warning was issued.

Saturday’s quake took place in the same area as the March 11, 2011, earthquake that caused the country’s worst nuclear disaster on record, when three reactors at the Fukushima Daiichi nuclear plant melted down, releasing radioactive materials into the air.More than 20,000 people died or went missing in the 2011 quake and tsunami, while hundreds of thousands more lost their homes. More than 100,000 people were evacuated from the area.Authorities have spent the past ten years cleaning up the area — a massive effort that experts say will take another few decades to complete.Despite these on going efforts, when Japan hosts the Olympic Games this year the torch relay is scheduled to start its journey in Fukushima on March 25, 2021 — a symbol of recovery and rebuilding in the area.”As 2021 will mark the 10th anniversary of the 2011 Great East Japan Earthquake, the rescheduled Tokyo 2020 Olympic Torch Relay will aim to showcase the recovery of the areas worst affected by the disaster,” the Olympic committee said on its website.However, Saturday’s earthquake is a reminder that the events are 2011 are not entirely behind the Fukushima region. 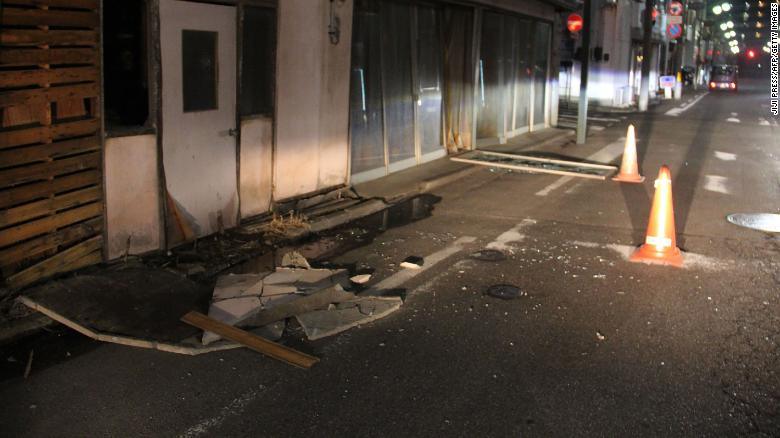 Damaged buildings are seen in Fukushima on February 13.

Early Sunday morning, Japan’s Prime Minister Yoshihide Suga reassured the public that “no abnormalities” have been reported at any of the nuclear plants in the region after Saturday’s quake.

Speaking to reporters, Suga said the damage is still being assessed, and asked residents in the affected area to stay indoors and be prepared for aftershocks.

The earthquake triggered landslides and uprooted sections of a major expressway, affecting both prefectures. Embankments along the road collapsed, covering the road and burying guardrails in mud, NHK reported.

About 850,000 households in the Kanto and Tohoku regions, which include greater Tokyo, lost power after the quake, NHK reported. Power is now gradually being restored.