The campesino guerrilla movement that rocked President Carlos Salinas and Mexico. From 1994 to date, the guerrilla group now controls 43 municipalities in Chiapas

MEXICO (Infobae) – In the early morning of January 1, 1994, when militants of the Zapatista Army of National Liberation (EZLN) declared war on the federal army to demand land, work, shelter, food, health, education, freedom, independence, democracy, justice, and peace for the indigenous people of Mexico.

History has called this moment the “Zapatista Uprising” which consisted of the seizure by force of arms of the municipal capitals of San Cristobal de las Casas, Ocosingo, Altamirano, Las Margaritas, Oxchuc, Huixtán and Chanal in the state of Chiapas.

Then, the Mexican government, headed by Carlos Salinas de Gortari, sent the armed forces to confront the Zapatistas. The fighting between the indigenous people and soldiers lasted 11 days, leaving dozens of people dead. The images of the bodies of indigenous Tzotzil, Tzetzal, Chol, Tojolabal, and Mam, lying on the ground next to wooden and real rifles, went around the world.

Ironically, the most visible face was that of a hooded man who called himself “Subcomandante Marcos. Never, in his dozens of public demonstrations and to this day -now he is known as “Subcomandante Galeano”- has his face been seen uncovered. However, Military Intelligence discovered his identity. Rafael Sebastián Guillén Vicente. He is a former student of the Faculty of Philosophy and Letters of the National Autonomous University of Mexico (UNAM) and professor at the Xochimilco Unit of the Metropolitan Autonomous University (UAM) in Mexico City, educated by Jesuit priests -which explains quite a bit of his views-.

Origins and negotiations
The EZLN is a political-military organization formed mainly by indigenous people from the Tzeltal, Tzotzil, Chol, Tojolabal, and Mam groups in Chiapas. Its origins date back to the early 1980s when a small guerrilla group – made up of mestizos and indigenous people – settled in the mountainous area of the Lacandon Jungle to create a front to promote the armed struggle in the country.

The Declaration of the Lacandon Jungle was the first public document of the EZLN; it invoked Article 39 of the Constitution and declared war on the federal army, designated as the “fundamental pillar of the dictatorship […] monopolized by the party in power and headed by the national executive.

At that time, the government of Carlos Salinas de Gortari was precisely seeking to sign the Free Trade Agreement (FTA) with the United States and Canada. It was out in the view of the whole world, so from the 12th of the same month, the federal authorities and the EZLN began to approach each other to solve the conflict through dialogue.

On February 16, 1994, the first conversations between the EZLN and the federal government began, which ended with signing the San Andres Accords on “Indigenous Rights and Culture” in 1996. The state committed to recognize indigenous peoples constitutionally and to grant them autonomy.

The negotiations continued during the first years of Ernesto Zedillo’s government. Still, the Zapatistas were interrupted when the federal government launched a proposal that did not respect the agreements reached the dialogue tables. To the suspension of the dialogue, Ernesto Zedillo’s government responded with a new military offensive that included the release of arrest warrants against leaders and the harassment of indigenous Zapatista communities.

The measures adopted by the government had to be partially reversed due to the response of Mexican society. It rejected the violent retreat and manifested itself in favor of dialogue and peace, in addition to intense international pressure that was expressed through the formation of solidarity organizations with the Zapatista movement in various countries, primarily Europe.

In March 2001, the Zapatista Army led a historic mobilization called the “March of the Color of the Earth,” For 37 days, hundreds of indigenous and mestizo people walked through 13 states to Mexico City. It was the first time that Subcomandante Marcos and the Zapatistas left the conflict zone. 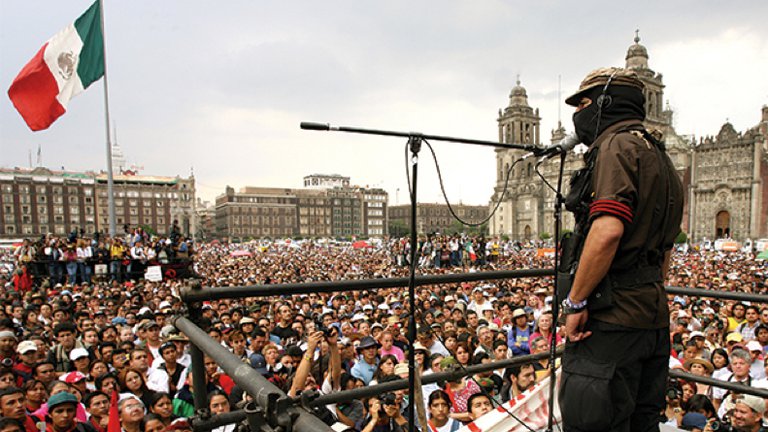 Once in the nation’s capital, the Third National Indigenous Congress was held. The Zapatista Army participated in the Congress of the Union and the University City of the National Autonomous University of Mexico (UNAM). The Zapatistas’ last attempt was to establish a form of constitutional agreement with the government to ensure their rights and sovereignty.

AMLO and the EZLN: sympathy and break
In 2018, during the campaign in which Andrés Manuel López Obrador took part in a new confrontation between Marcos and AMLO. After María de Jesús Patricio “Marichuy,” the independent indigenous candidate, did not reach the necessary signatures to achieve her candidacy, the National Indigenous Council (CNI), an organization linked to the EZLN, decided that they would not support the Tabasco native in the July 1 election. 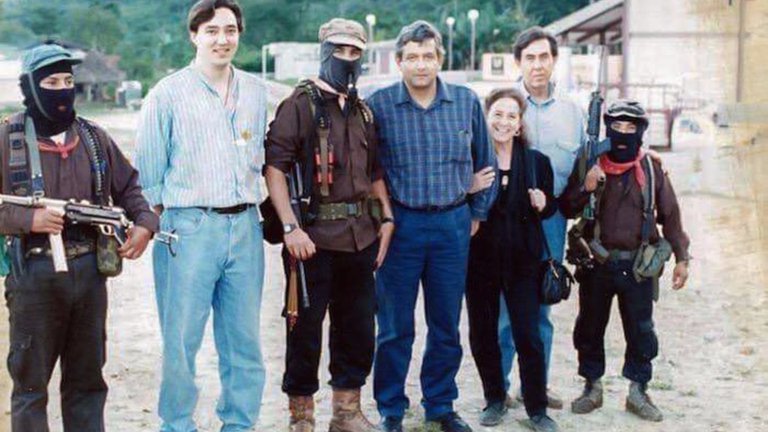 After announced Andrés Manuel López Obrador’s triumph as president, the EZLN published an advertisement signed by sub-commanders Galeano and Moisés. They assured that the new government would disappoint everyone.

The most recent dispute between the two leaders has been over the construction of the Mayan Train, one of the landmark projects of Andrés Manuel López Obrador’s government. In mid-December, the Zapatista Army denounced that the citizen consultation for the approval of the Mayan Train, which will connect various locations in the southeast, was a “simulation.

The history of the EZLN is complex and has been marked by transformations, fractures, and reformulations throughout more than twenty years of existence. From a change to its thesis for social change and armed struggle, the consolidation of a project with the indigenous people at the center, and later questioning neoliberal capitalism and the mobilization for a new democracy.

For some, the EZLN continues to be a symbol of resistance and indigenous struggle in Mexico and the world… for others; it is just a guerrilla group that seeks to destabilize the country.