The automotive industry is beginning to say goodbye to gasoline-powered cars.

In the coming years, a significant change is expected concerning new non-combustion models.

MEXICO CITY (Imagen) – The automotive industry is transforming, not only with the arrival of new car models but also by investing in more environmentally friendly cars.

This is how companies seek to reduce the effects of climate change and focus on electric vehicles in the coming years.

Because of the current global warming situation, several countries have already set a date to stop producing gasoline-powered cars.

According to a graph from Statista, one of the countries where the most electric cars are sold in Norway, followed by Iceland and Sweden. 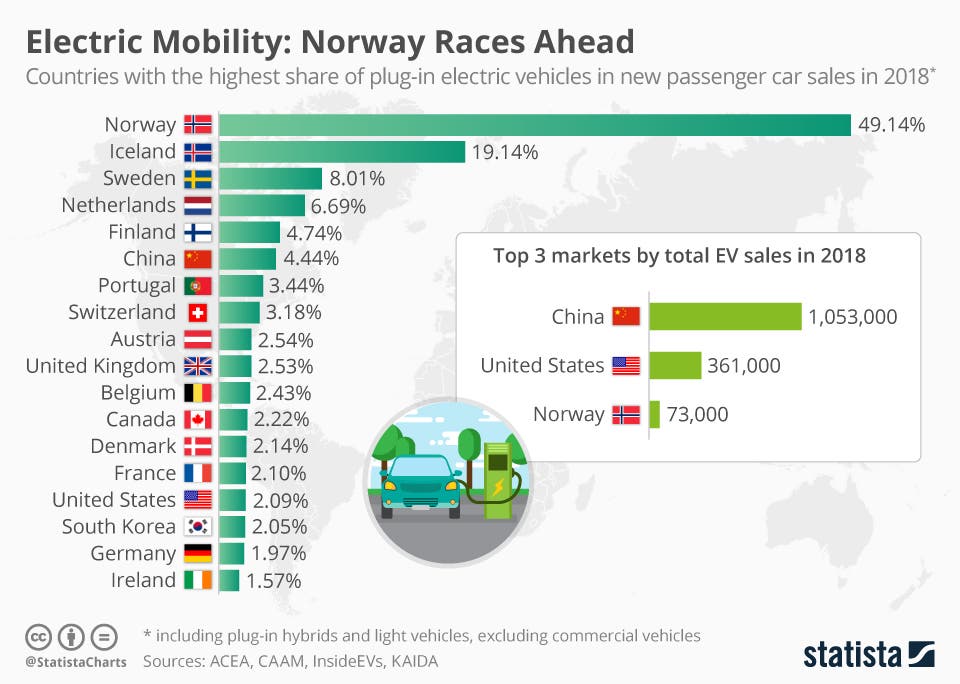 One of the brands that announced that it would bet on electric cars is General Motors, which during the week announced that its new strategy would make it a zero-emissions company by 2035. In Mary Barra’s words, CEO of the firm, they will stop producing gasoline and diesel vehicles.

But this is not the only company that has taken this step. Below we share with you other automotive companies that have made similar announcements.

Volkswagen
The German firm confirmed that its next generation of combustion cars would be the last. Michael Jost, head of strategy of the brand, said that they would gradually reduce gasoline and diesel engines to the absolute minimum, which will be visible from 2026.

One of the goals is to abandon gasoline cars in 2040. However, they estimate that in 2050 some models will still be available.

Honda
The Japanese brand intends to eliminate internal combustion engines from its product range in Europe by 2022. Company executives have indicated that their Honda vehicles will be a combination of hybrids and 100% electric.

Volvo
The brand has proposed to advance in the production of electric cars from 2019. This step, and according to Håkan Samuelsson, CEO of Volvo, is due to the new interests of its customers, who are looking for an efficient and less polluting vehicle.

BMW
The company’s executives have expressed that the electric car’s transition is underway and will take several decades. Still, they are already taking the first steps, saying goodbye to some of their most legendary fuel engines.

Ford
Since 2018 Ford Motor Company announced that it would allocate more than 14 billion dollars to realign its operational infrastructure to boost the design and manufacture of hybrid and electric units, thus beginning its transition to say goodbye to gasoline cars.

Some of the electronic cars available in Mexico are:

Renault Twizy: It has a small design and provides a unique energy solution for city life: it charges in 3.5 hours using a domestic energy point and an adapter and has a driving range of 100 km in the urban cycle.

Zacua M2: It is the only electric car on the list designed and produced by Mexicans. Its battery has a life of 3,000 cycles (charges from 0 to 100%), which can be translated into 8 years of life.

Tesla Model 3: It is much smaller than the Model S; although it is not the most advanced or the most luxurious brand model, it is very well equipped.

Chevrolet Bolt EV: It is an electric car that can be charged with ultra-fast direct current units, available in public spaces.

BMW i3: It is the first electric car that has been designed entirely sustainable from its development to its manufacture.

Tesla Model S: It is considered one of the best electric cars because it has the longest range with 500 km before battery recharge.