MEXICO CITY (SSA) Mexico registered a new record number of deaths due to covid-19 by reporting 1,803 new deaths, bringing the accumulated number of people who have lost their lives to 146,174.

Another maximum figure was reached in the number of infections, with the registration of 22,339 new cases, increasing the total to 1,711,283. 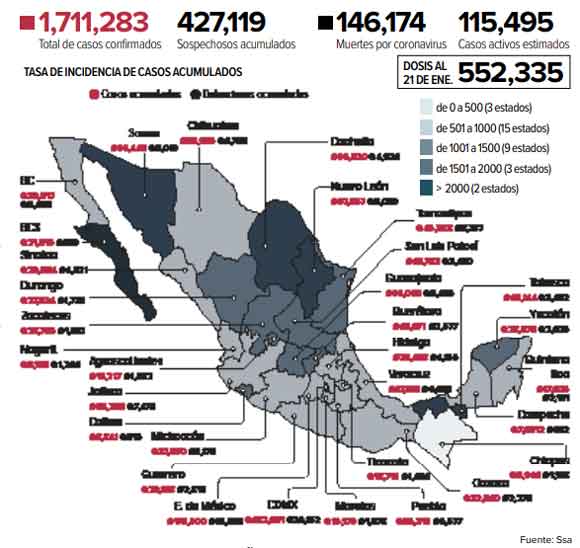 At the national level, occupancy in general beds is 61%. The nine entities with an occupancy higher than 70 percent are Mexico City, Guanajuato, State of Mexico, Nuevo Leon, Hidalgo, Puebla, Morelos, Guerrero Nayarit.

Given this panorama, José Luis Alomía, General Director of Epidemiology, pointed out that the pandemic continues to grow. In the last few weeks, there has been an increase of 10 percent.

Since the beginning of the winter season, we have had a continuous increase in the generation of infections and, therefore, cases. This increase has continued in the last few weeks.

On the other hand, Undersecretary Hugo Lopez-Gatell pointed out that state governments cannot acquire anti-covid-19 vaccines independently because they contravene the National Strategic Plan guidelines. Furthermore, he emphasized that the country would act “as a disorderly and anarchic community in case they do so.”