Analysts reveal ten risks that may affect Mexico this year.

Failures in the Covid-19 vaccination strategy and a polarized environment in the electoral process are among the top 10 risks for 2021 that could affect the country’s business environment and governance, according to an analysis by Integralia Consultores.

MEXICO (Integraia Consultores) – The analysis, which classifies the probability of the risk as “very high,” “high,” and “medium,” is based on the firm’s methodology that quantifies the potential impact and probability of occurrence of each risk, based on quantitative and qualitative indicators. 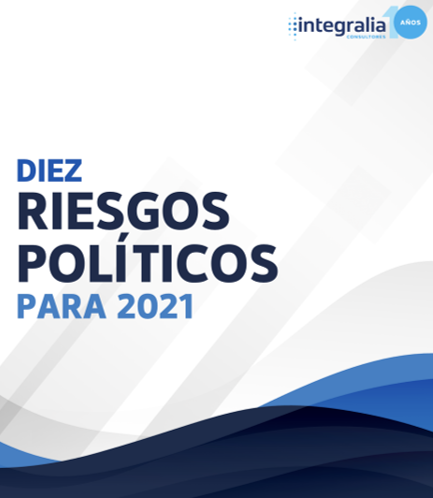 Ten Political Risks for 2021 Integralia Consultores
The report clarifies that risk is not predictive, and the level of probability may change during the year. 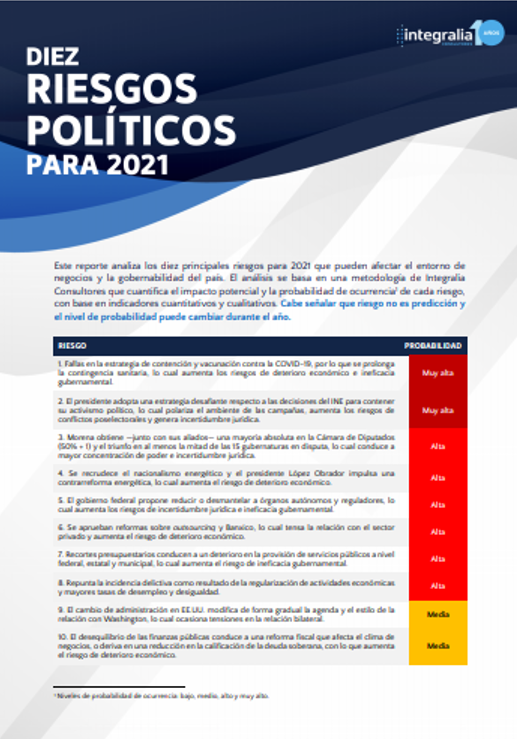 Risks with “very high” probability:
1. Failures in the containment and vaccination strategy against Covid-19, thus prolonging the health contingency, which increases the risks of economic deterioration and government inefficiency.

2. The President adopts a defiant strategy concerning INE’s decisions to contain his political activism, which polarizes the campaign environment, increases the risks of post-electoral conflicts, and generates legal uncertainty.

Risk of “high” probability:
3. Morena obtains -with their allies- an absolute majority in the Lower Chamber (50% + 1) and the victory in at least half of the 15 governorships in dispute, which leads to a greater concentration of power and legal uncertainty.

5. The Federal Government proposes to reduce or dismantle autonomous and regulatory bodies, which increases the risks of legal uncertainty and government inefficiency.

6. Reforms on outsourcing and Banxico are approved, which strains the relationship with the private sector and increases the risk of economic deterioration.

7. Budget cuts lead to a deterioration in public services provision at the federal, state, and municipal levels, which increases the risk of government inefficiency.

8. The incidence of crime increases due to the regularization of economic activities and higher rates of unemployment and inequality.

Risk of “medium” probability:
9. The change of administration in the United States gradually modifies the plan and style of the relationship with Washington, which causes tensions in the bilateral relationship.

10. Imbalance in public finances leads to fiscal reform that affects the business climate or leads to a reduction in sovereign debt rating, thus increasing the risk of economic deterioration.

Reform of the justice system
The proposal is considered a step backward for the accusatory criminal justice system since it does not strengthen investigative capacities and grants more extraordinary powers in precautionary and punitive measures.

Reform of the Judicial Power
Congress must issue and modify various secondary laws to specify rules of the jurisdictional personnel and strengthen the Federal Institute of Public Defense.

Widespread consultation to judge politicians for past acts
AMLO will have a topic on which to focus the political discussion before the 2021 elections. The INE has declared that it does not have sufficient resources to organize it.

Bank commissions
It cannot be ruled out that the issue will be discussed again in the Senate, which would generate uncertainty in the markets.

Growing militarism
More extraordinary powers have been transferred to the Armed Forces outside their areas of competence, to the detriment of civilian institutions. The risk of corruption increases.

Finally, the report talks about the evolution of political risk in Mexico, 2018-2020

Since 2018 the risk levels of power concentration, legal uncertainty, government inefficiency, and economic deterioration have increased, while social conflict and public insecurity have remained constant.

READ THE FULL REPORT IN ENGLISH