The mountains of Sinaloa, the kingdom of the Mexican “narcos” and headquarters of a multinational trafficking company.

French newspaper “Le Monde” plunges into the works of the most powerful Mexican cartel with an investigation in three parts, signed by Bertrand Monnet, professor at Edhec and specialist in crime economics. The first episode: the organization’s rural stronghold, the heart of a low-cost heroin industry.

Monnet describes two Jeeps loaded with armed men waiting at the bend in the road. As soon as his pick-up joins them, they start in a cloud of dust, and we follow them in the middle of the night. A few minutes later, the convoy stops in the middle of an isolated quarry. “Okay, you can go down,” announces the driver. In the light of the headlights and the engines’ noise, ten silhouettes slowly unfold around him. Black hoods, mesh jackets, jeans, automatic pistols, and assault rifles… Those sicarios (“hitmen”) belong to the Sinaloa cartel, one of the world’s largest mafias. 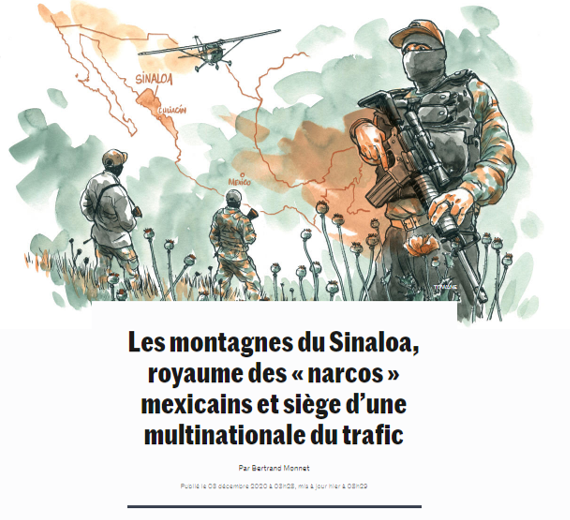 Monnet explains that their leader approaches. One meter seventy-five, sporty looking, he wears a military outfit. At 35, Luis – first names have been changed – is one of the “commanders” of the city of Culiacan (900,000 inhabitants), the cartel’s capital. It’s up to him to decide whether or not I can go further into the organization’s territory. It is here, in northwestern Mexico, that the wealth of the most powerful of the country’s eight cartels, a drug multinational with an estimated annual turnover of $3.5 billion (2.9 billion euros), has been built up.

This criminal enterprise obeys an economic model of formidable efficiency: selling hundreds of tons of drugs across the planet using two assets, corruption and violence. On Mexican soil, sometimes even abroad, this violence is boundless. In twenty years, the Sinaloa cartel has executed more than 30,000 people: “narcos” of competing organizations, police, military, civilians, traitors, journalists… The list is endless. In its fiefdom of Culiacan, an average of eight people die every day. “I don’t know exactly how many, but I’ve killed more than a hundred men,” the “commander,” Kalashnikov in hand, says.

This research, again, refutes what Lopez Obrador says every chance he gets. “Mexico is changing. The reality is that not only is Mexico not evolving, but in the face of this new government, the power of drug trafficking has grown substantially.

López Obrador’s strategy of “hugs and no bullets” does not work. It doesn’t work, it hasn’t worked, and it won’t work. It has transpired in various circles of power that AMLO’s government, following General Cienfuegos’s capture, has tied up DEA agents’ hands operating in Mexico.

This government should be ashamed. Every time they “pat themselves on the back,” an international media comes to deny what they are so proud of. On this occasion, it is Le Monde.