The Cienfuegos case: Sedena classified the file for an indefinite period of time.

MEXICO (infobae) – The Ministry of National Defense (Sedena) classified as confidential for an indefinite period General Salvador Cienfuegos’ file, since it argued that the set of documents includes personal data.

In response to a request for access to the information, the Directorate General of Archives and History determined that any statement about an identified or identifiable person is confidential.

In turn, it appealed to Article 113 of the Federal Law on Transparency and Access to Public Information, which mentions the reservation on personal data and sensitive information that may affect the citizen in case it is disseminated. Thus, the obligated subject, i.e., Sedena, should consent from the owners of the information to omit the character of confidentiality.

In the technical opinion of Eduardo Bohórquez, director of “Transparencia Mexicana”, the case is “at a legal borderline” because the figure in the file may contain a conglomerate of reports, such as major medical insurance, address or other references protected by law. Although it would also include data of possible public access such as appointments and curriculum.

According to the dictionary of Transparency and Access to Public Information, the “File” figure refers to a set of documents ordered and related to the same matter, procedure, or activity of the obligated subjects. That is to say, those entities of the Executive, Legislative, and Judicial branches, as well as autonomous bodies, political parties, trusts, public funds, and State Unions, and any individual or legal entity that receives and exercises public resources.

“It is the documentary body that contains the narrative of the actions of the obligated subjects and, although it is considered a source of public information, it may contain information of restricted access in its modality of confidential or reserved, which will not be of public knowledge or will be in a public version,” points out the dictionary on the definition of “File.”

Salvador Cienfuegos Zepeda, former Secretary of the National Police, was the center of the controversy after being arrested on charges of drug trafficking in the United States and later returned through the government’s efforts Andrés Manuel López Obrador.

Now his case has become a challenge to the Mexican justice system, because the less information that is offered, the more impunity will be perceived, according to Mario de la Garza Marroquín, a lawyer from the Escuela Libre de Derecho.

Eduardo Bohórquez commented that the Armed Forces are reluctant to be transparent due to their institutional design. The interest of journalists and citizens in a high profile of public life like General Cienfuegos stood out even more strongly since his arrest at Los Angeles International Airport, California, on October 15.

Leaks, anonymous sources, and strategic handling of information abounded to respond to a news story that took the Mexican government itself by surprise.

The diplomatic note in which the López Obrador administration expressed surprise at not having received information from an ally arrived on October 28. Two days earlier, after a meeting between Marcelo Ebrard, Secretary of Foreign Affairs, and Christopher Landau, US Ambassador to Mexico.

According to the request in Folio 0000500232720, the General Direction for North America, which depends on the Ministry of Foreign Affairs, ordered to reserve the note for five years on November 25.

On December 21, in the act of magnanimity, López Obrador ordered the lifting of such reservation, which had justified possible damage to bilateral relations, particularly in the US’s change of administration. 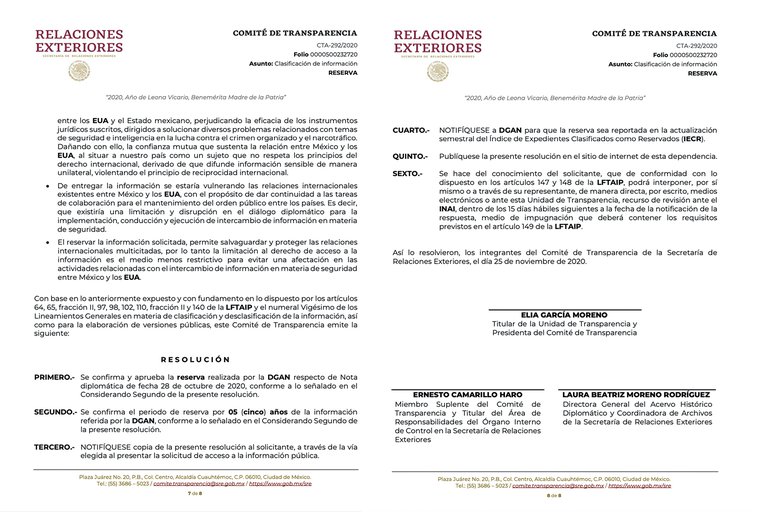 “I believe that this week the diplomatic note that was sent will be released, and I hope that soon the prosecutor’s office will report and resolve this issue,” said the president, since he had instructed Marcelo Ebrard not to keep the case under wraps.

Minutes later, Roberto Velasco Alvarez, director for North America, published the document on his Twitter account. A month after the response, and after having contacted Joe Biden, AMLO’s government decided to be transparent with a letter without further details to what was already known.

Eduardo Bohórquez commented that both the Foreign Ministry and Sedena are on the threshold of less transparency in access to public information because it can justify National Security or bilateral cooperation.

He pointed out that in the case of Cienfuegos, the Attorney General’s Office is the agency with the most significant obligation to report on the State’s actions. It has already been registered that there is a judicial process underway against a former head of the Army who was exposed for his alleged criminal conduct with drug cartels. 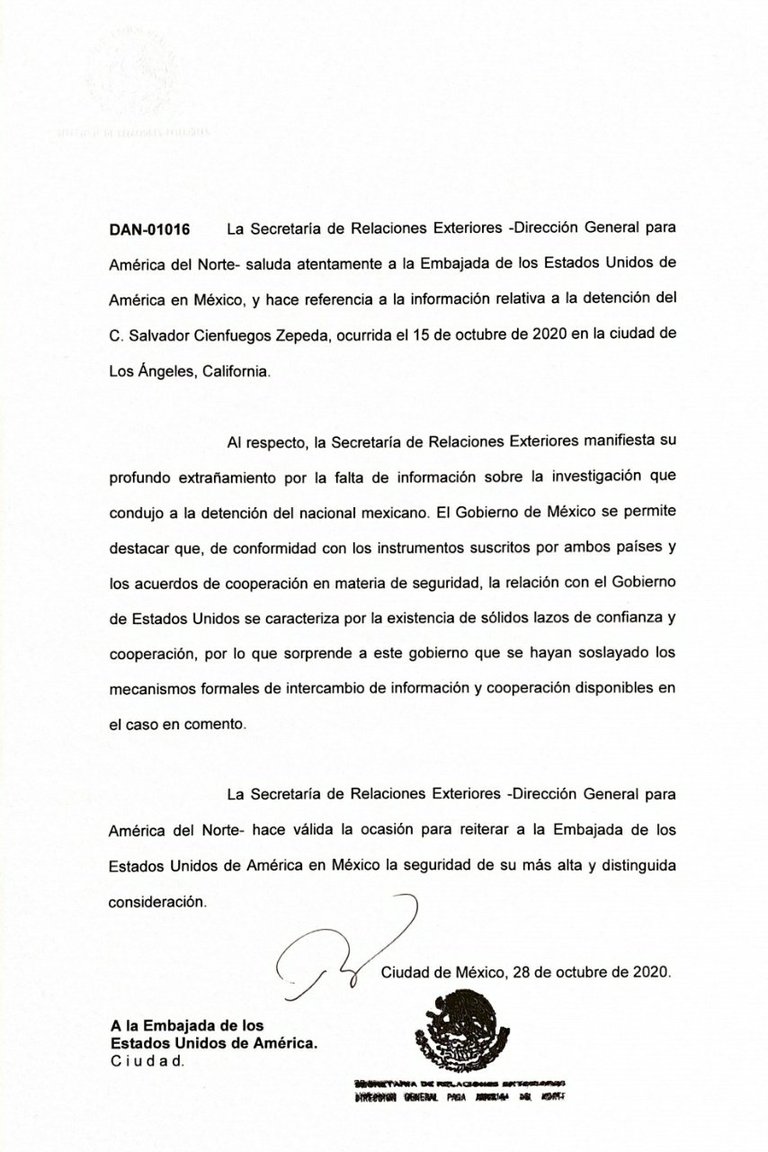 The presumption of innocence and the investigation by the Public Prosecutor’s Office are protected so that the General’s defense is not alerted to how the Folder is being integrated.

“The one who is obliged to report the case promptly is the Attorney General’s Office. But it is an agency that has had a hard time understanding that, even when one part of the judicial process is protected, another part is completely open.

“All criminal proceedings are open to the public regardless of who they are. All the hearings and what is said in them must be public,” said the professor of Development Studies at the University of Cambridge in an interview with Infobae Mexico.

The university professor added that the Armed Forces are not very accessible to provide data, not only in Mexico but in the rest of the world. That is why their relationship with the bodies that guarantee transparency has been of constant tension due to litigation, revision resources, and mediation to open the information.

“It is tense because it is an institution that was not used to the greater public and social scrutiny, and interpreted that all information under its protection is a matter of National Security.”

“This is an institution that by definition resists transparency, but I believe that in that resistance, sometimes confidential classification is abused for matters that would not have any public harm if known,” said Bohórquez, who acknowledged a gradual advance in some issues.

According to data from the National Platform for Transparency, 70 requests have been made to the Federation from 2010 to 2020, in whose petitions Salvador Cienfuegos Zepeda is involved, either because of the institution, he headed or because his administrative profile is known.

Lopez Obrador instructed the Ministry of Foreign Affairs to negotiate Cienfuegos’ return to freedom and dismiss the charges of drug trafficking in New York since he is expected to be processed in Mexico.

From 2014 onwards, there was greater interest in requesting data on the former owner of the headquarters. That year there were nine requests, the same number as in 2020. However, 14 submissions were addressed to the institution that he headed only in 2015 and 2016, while for the current year, there are 5 in that area.

During that time, citizens have asked about their psychological and educational skills and positions held. However, there are also questions regarding human rights violations.

For example, from January 1, 2012, to May 14, 2018, Sedena received 2,986 complaints filed with the National Human Rights Commission for abuses allegedly committed by the Army and Air Force members. But issued only 15 recommendations between December 31, 2012, and May 14, 2018, the period in which Cienfuegos was in charge of the military institution.

Although most of the requests have received unsatisfactory responses, the scrutiny of the official has not been less.

In the US, prosecutors argued that the charges against the former head of the Sedena (for distributing and shipping cocaine, marijuana, and methamphetamine) had a factual basis and at least 743 pages of detailed evidence, including interceptions of communications with the H-2 Cartel, the Beltran Leyva faction.

It remains to be seen whether the FGR will make a solid case and report during the process and pending the resolution of the National Institute of Transparency on the General’s file. For now, Salvador Cienfuegos Zepeda has been free for one month and six days after being deported last November 18 on a luxury flight.