The Institutional Revolutionary, National Action and Democratic Revolution Parties registered, on the afternoon of December 23, before the National Electoral Institute (INE), the coalition “Going for Mexico”.

According to the PAN statement, this coalition’s main objective is to “recover balances, counterweights, win a majority in the Chamber of Deputies and correct the country’s course in economic, health and security matters.”

The coalition was registered with the INE authorities within the times set by the electoral body. The procedures were carried out by Marco Antonio Mendoza Bustamante, deputy secretary of the PRI Presidency; together with Raymundo Bolaños Azócar, general legal director of the PAN’s CEN; Víctor Hugo Sondón, representative before the INE; and Elizabeth Pérez, secretary of Electoral Affairs and Alliance Policy of the PRD.

“It consists of a partial coalition in some districts of the country, which achieves the highest objective of caring for Mexico, its institutions, freedom, betting on federalism and respect for municipalism,” they wrote in the official statement.

At the moment, it is known that the intention of these political parties is to go together in 180 federal electoral districts. Today the corresponding record of just 171 was made, where 57 would be for the PAN, 60 for the PRI and 54 for the PRD.

“This will be a coalition with balances of representation between the parties and a common platform that forms a legislative majority in which a common minimum democratic agenda is signed, with which parties, women and men are committed, as has happened before,” they assured.

They also indicated that “the sum of the efforts of citizens, as well as of various political forces, is aimed at defending federalism, fighting corruption, strengthening democracy, always putting citizens first as the main beneficiary of the agenda and with the commitment to postulate candidacies to Provincial Councils with moral solvency and good public reputation ”.

“We are not only united by a specific proposal or a specific public policy […] We are united by the threat that we are all experiencing today,” said Marko Cortés, the national president of the PAN. 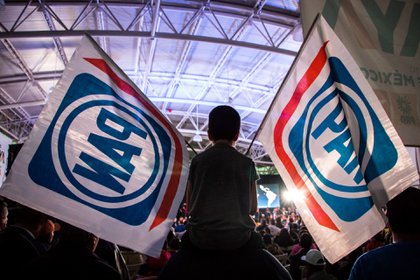 The intention of the parties is to be united in at least 180 federal electoral districts (PHOTO: MISAEL VALTIERRA / CUARTOSCURO)

Recently, and through an online press conference, the leaders of the parties involved met to ratify their political position as opposition to the administration of Andrés Manuel López Obrador .