The federal officials specified that at the “Risk Traffic Light” in effect from December 7 to 20, the entities registered in red are two, in orange there are 24, 3 are in yellow and 3 in green.

MEXICO CITY (Times Media Mexico) – The Ministry of Health informed that the number of deaths due to Covid-19 during the 49th epidemiological week amounts to 113 thousand 953. The confirmed cases total one million 250 thousand 044 cases, and the percentage of positivity is 39%.

This was informed by Ruy López Ridaura, general director of the National Center for Preventive Programs and Disease Control (Cenaprece), during the 284th press conference on the update of data on the pandemic due to the Sars-Cov2 virus that is being carried out in the National Palace.

The federal official specified that at the Risk Traffic Light, in effect from December 7 to 20, the entities registered in red are two: Baja California and Zacatecas, while in orange there are 24; while Tlaxcala, Colima, and Oaxaca are in yellow and three more entities in green: Veracruz, Campeche, and Chiapas. 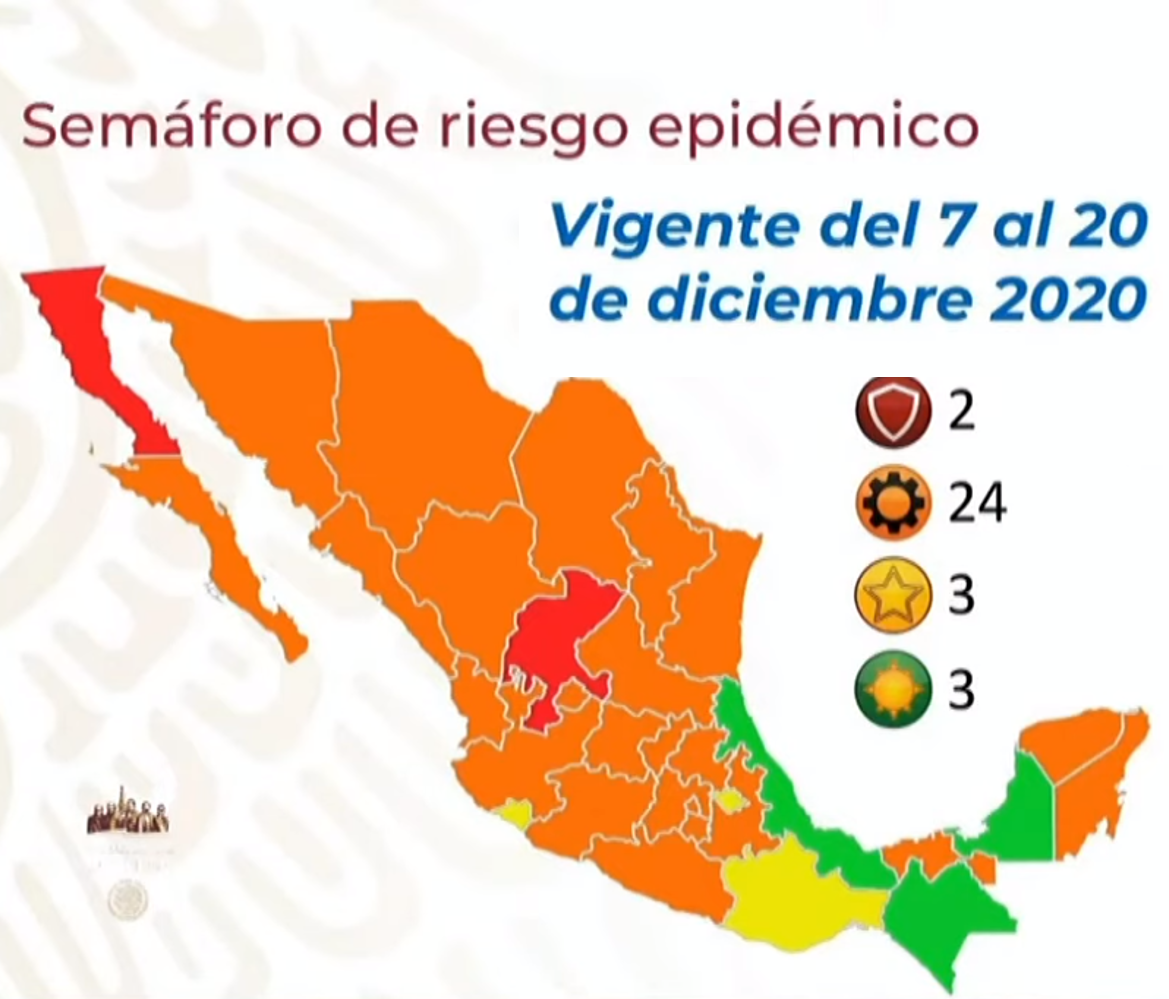 López Ridaura also pointed out that the reported symptoms and signs total three million 194 thousand. One million 553 thousand 633 have been negative, while those who have recovered amount to 918 thousand 681.

Regarding the hospital occupation scenario, Ruy Lopéz specified that at a national level, the beds of general attention add up to 28 thousand 605, where 16 thousand 458 are available, and 12 thousand 147 are occupied that is 42% of its capacity.

Data was also updated on the segment of hospital occupation for the care of patients in critical condition. A total of 10 thousand 080 beds are reported throughout the country, from which 6 thousand 520 are available, and 3 thousand 560 are occupied, that is, 35%.

Once again, Mexico City occupies the first position with 71%, Aguascalientes with 65% in second place, Baja California with 63%, the State of Mexico with 53%, and Zacatecas with 48%.

CDMX tightens restrictions
Faced with the Emergency Alert by Covid-19, which officially replaces the epidemiological traffic light, the Mexico City Government reactivated restrictive measures to avoid crowds, mainly in the Historical Center. That includes closing non-essential businesses at 5:00 p.m. and having them pull down their curtains two days a week, Sunday and Monday.

They also announced actions for the 200 neighborhoods of priority attention. Commerce in public streets will have to be withdrawn, and for the 16 mayoralties, pilgrimages and fairs will be prohibited, and in the tianguis, people will not be able to stay to eat. They will have to take prepared food home.

Yucatan
After the economic reopening, the most critical data are hospital occupation and daily admissions. As of Sunday, December 13, 2020, there are 149 patients in public hospitals. 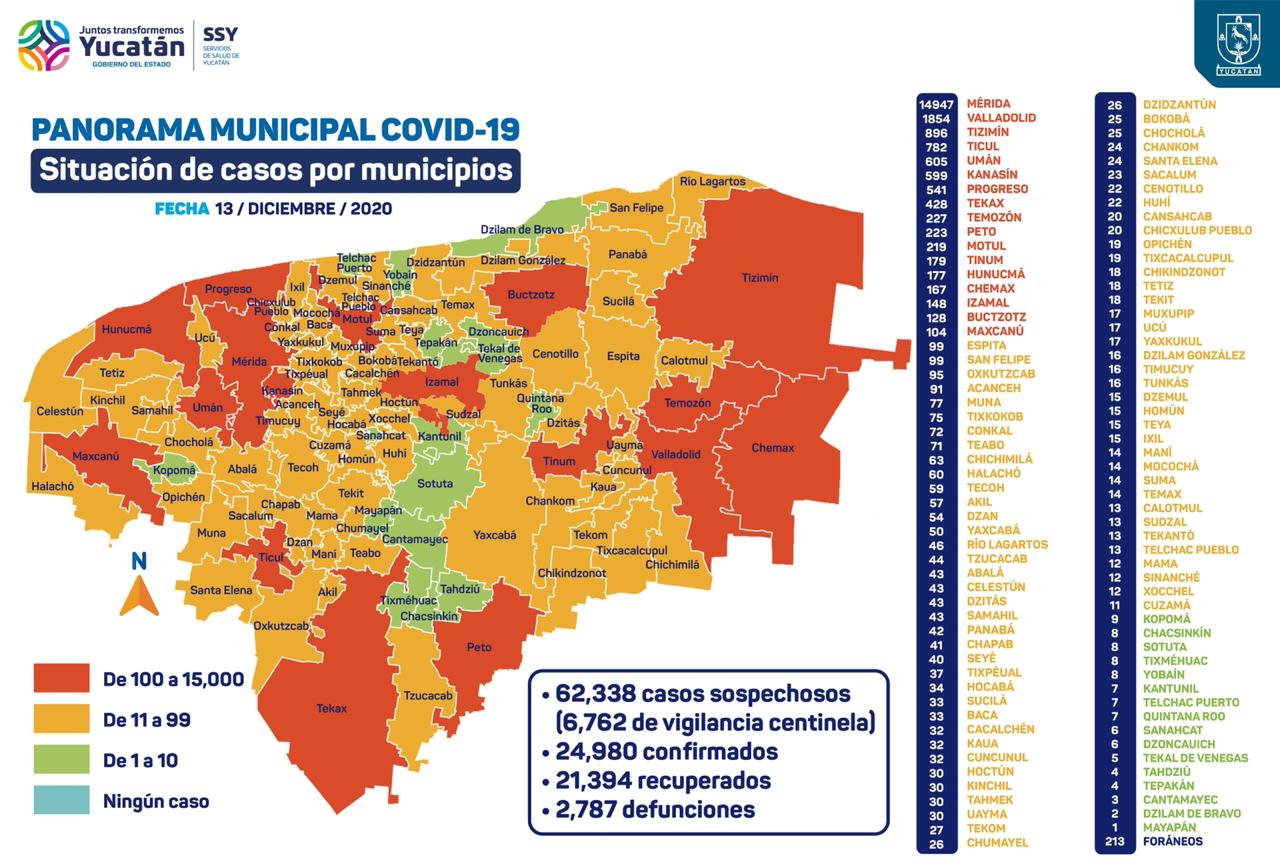 21,394 patients have already recovered: they have no symptoms. This figure represents 85% of the total registered infections, which are 24,980.

57 new infections of Coronavirus were detected, and 7 deaths.
Specifically, 14,902 people have been diagnosed with Coronavirus in Merida (accumulated cases as of December 13) 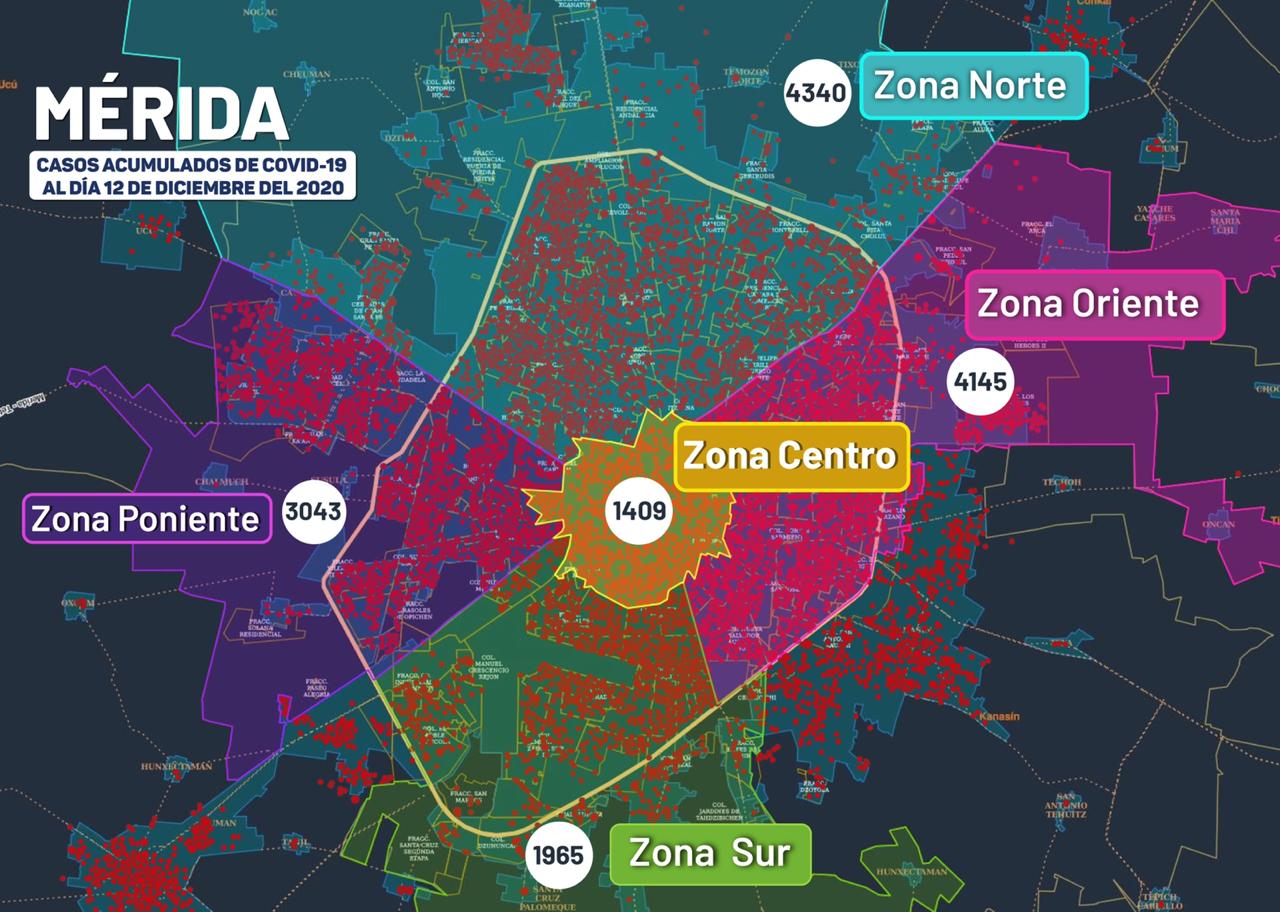