“Today, the first 3,000 doses of Pfizer’s vaccine arrived in Mexico, which will have the objective of calibrating the cold chain necessary for its storage, distribution, and application,” informed the Mexican Ministry of Foreign Affairs.

MEXICO CITY (Times Media Mexico) – The first doses of the Covid-19 vaccine arrived in Mexico this Wednesday. Minutes after 9 am, a plane from Belgium landed at Mexico City’s International Airport with the batch.

Andres Manuel Lopez Obrador, in his press conference, announced that this Thursday would be when the vaccination of Health personnel will start. He clarified that it is still a calibration procedure.

“Today, the first three thousand doses of Pfizer’s vaccine arrived in Mexico, which will have the objective of calibrating the cold chain necessary for its storage, distribution, and application. In this way, the essential process will be refined to ensure that they will be administered efficiently once larger quantities of the vaccine arrive… The next shipment of Pfizer’s vaccine will be 50 thousand doses, which will initiate a process of periodic deliveries adding up to 1.4 million between now and January 31st. During the rest of the year, the additional doses agreed with the mentioned laboratory will arrive in Mexico,” informed the Ministry of Foreign Affairs, minutes after 3:00 pm.

Mexican Foreign Minister Marcelo Ebrard informed on Tuesday, almost at the end of Lopez Obrador’s conference, that the first lot of vaccine had already been shipped to Mexico, at Pfizer’s laboratories Belgium. On this day, upon receiving the first vaccines, Ebrard assured that there would be enough supply.

“The agreement with Pfizer is more than 34 million vaccines and, as it was already explained, we are working with others, so there will be enough supply for the vaccination plan that has been developed by the Health sector of the Mexican Government, that is the second instruction. This means that it will be universal,” he stressed.

He added: “It is true that we are still facing a tremendous pandemic, the worst we have ever experienced, but Today is the beginning of the end of that pandemic, Today we can clearly see that we are going to defeat them, those viruses that have come to transform our lives.

Ebrard Casaubón explained last Tuesday that from this December 23rd until January 31st next year, Mexico would receive 1 417,659 doses of SARS-COV-2 vaccine. 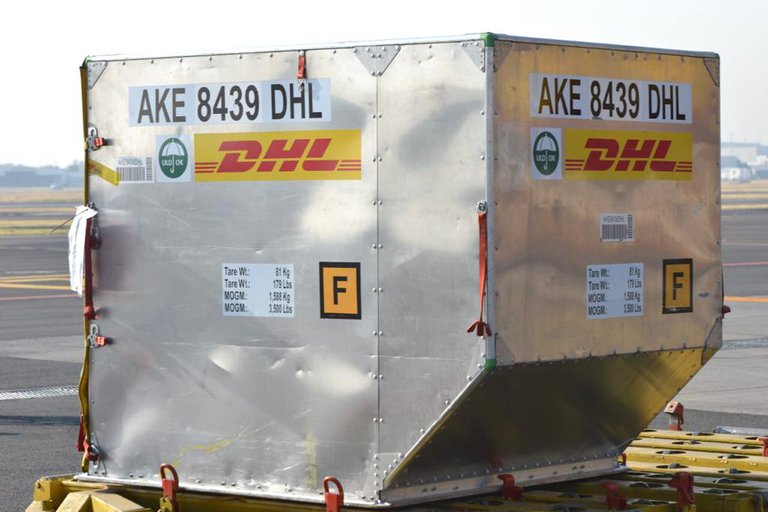 Once the plane landed with the vaccines, a ceremony was held at one of the runways of Mexico City’s airport, and was attended by the secretaries of Health, Jorge Carlos Alcocer Varela; Foreign Affairs, Marcelo Ebrard Casaubón; National Defense, Luis Cresencio Sandoval González; Navy, José Rafael Ojeda Durán; and Treasury and Public Credit, Arturo Herrera Gutiérrez.

The undersecretaries of Prevention and Health Promotion, Hugo López-Gatell Ramírez; of Multilateral Affairs and Human Rights, Martha Delgado Peralta, and the head of the General Administration of Customs, Horacio Duarte Olivares.

After the reception ceremony, a van from the DHL parcel delivery company left for the Colegio Militar, located in the south of Mexico City, to be taken to the National Institute of Cancerology, guarded by Army vehicles, for safekeeping.

Ebrard informed through his Twitter account that the Mexican Government signed purchase contracts for up to 200 million doses that will allow for the immunization, free of charge, of up to 116 million Mexicans between 2020 and 2021.

Hugo López-Gatell, the undersecretary of health and spokesman for the “strategy” against the coronavirus, said that more weekly shipments will arrive in February and that shipments will continue in March.

“By the end of March, we will be having 7.5 million doses of Pfizer and will continue to have 34.4 million doses,” the undersecretary said on Tuesday.

Currently, the supply of COVID-19 vaccines is limited but will increase in the coming weeks and months. The goal is to make the vaccine available to everyone as soon as doses are available, the Foreign Ministry said.

“The vaccine against COVID-19 from the pharmaceutical company Pfizer-BioNTech, and the others acquired by the Mexican Government, will be applied universally and free of charge to all people in a progressive way. Depending on the pharmaceutical companies’ production and delivery, after the first stage in which it will be applied to health personnel,” says a document issued by the Mexican Ministry of Foreign Affairs.