This is the 4th note regarding the conflict in Chelem. Since the articles of the conflict were published, new situations have come to light. One of them a private Facebook group named Informed Yucatan Beach Friends…

MERIDA Yucatan (Times Media Mexico) – The city of Merida and the state of Yucatan are known in Mexico and the rest of the world for their tranquility, security, and friendly way of life. In general terms, Yucatecans are good people, rooted in their traditions and the inheritances they take care of and share among those who decide to come and live in this state. These are precisely some of the main reasons people of different nationalities have opted to settle in Yucatan.

Since the articles of the conflict were published, new situations have come to light. One of them a private Facebook group named Informed Yucatan Beach Friends originally with 161 members, -currently 147. Originally a pro-Trump political Group, evolved into something else and exchanges became heated. Some who had different views from the majority of members were criticized, insulted, and even threatened. 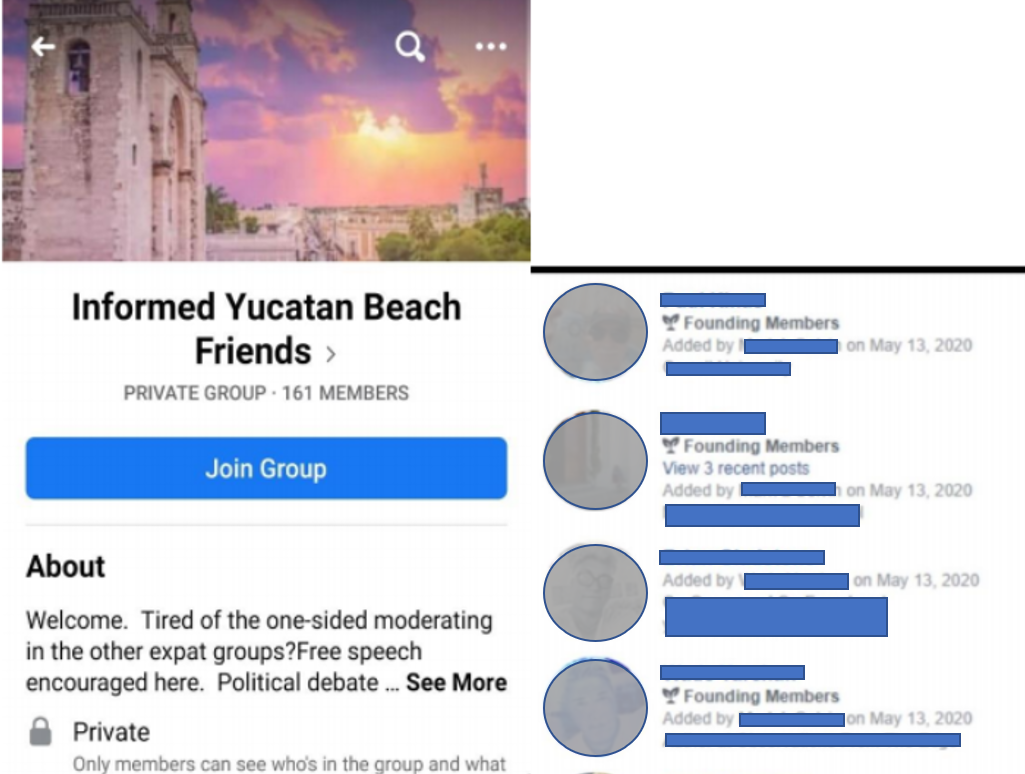 Groups play a vital role in the Facebook platform. They are essentially discussion forums organized around an endless number of possible subjects, allowing individuals to pursue their interests and communicate around shared interests. Groups can be public -posts are visible to all Facebook users- or private -the group administrator must approve individuals to join and see the publications-.

Despite public announcements of efforts to curb hateful speech and misinformation across its platform, Facebook still hosts many spaces in which this content propagates and thrives.

The Yucatan Times was able to verify the latter after receiving evidence from the group. Some of the content is explicit and unpleasant, and in its vast majority focused on the United States past election. On this Facebook group, there are all sorts of posts. Some regarding conspiracy theories linking the United States President-elect and the Democrat Party to an underground political group of pedophiles, allegations debunked in the United States. Other posts include George Floyd, racist undertones, racist memes, and insults given to those in disagreement.

Mexico does not need this type of people. Perhaps the members of the Facebook group should consider relocating back to their homelands since it is obvious they are not satisfied with their countries’ political situation, while living abroad. 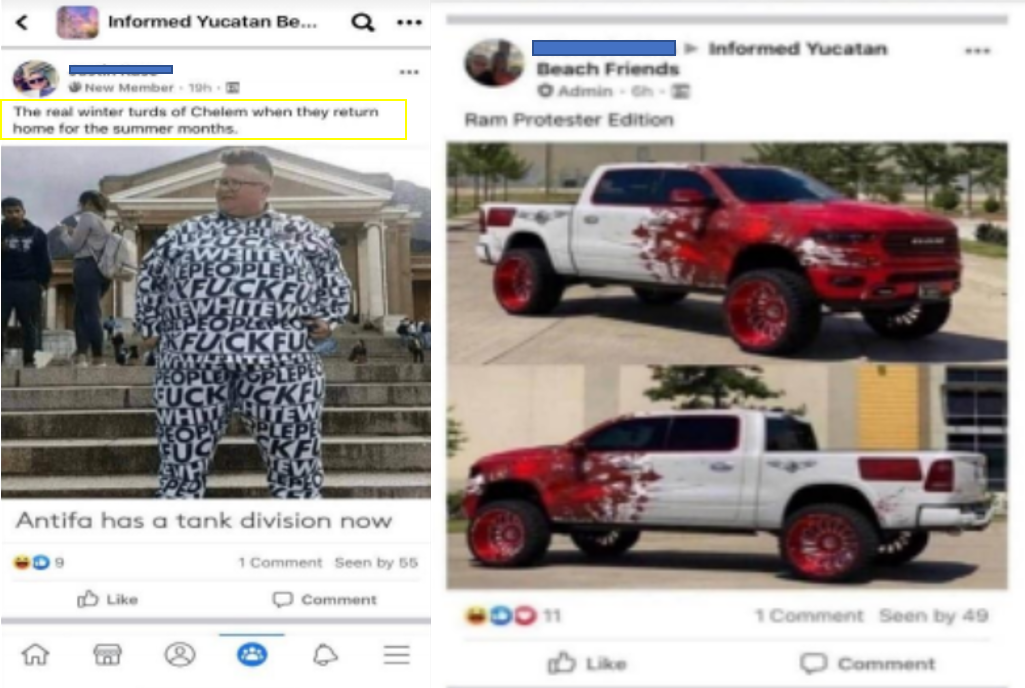 Threats against other expatriates.
Among the multiple posts to which this news platform had access, some violent exchanges stand out. Among these, the threats made to an Irish business-owner in Merida who openly opposes Trump and its supporters. Some members in the group, unhappy about that issue, consider that the business should be boycotted. Another user openly says that the establishment should be burned down. 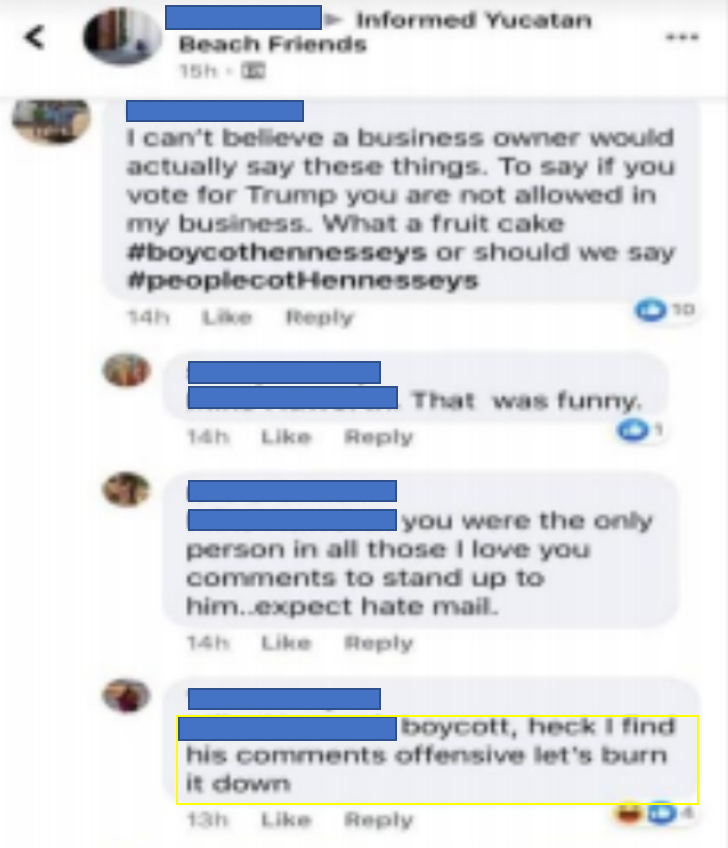 Every conversation and threat on this group has been made available to the corresponding authorities for further investigation.

Threats.
After the publication regarding the conflict amongst the expatriates and the local authorities, The Yucatan Times received a letter and threats regarding the publication, including the one from Mr. Walter Anthony Yarchan, -also known as Wade Yarchan- attorneys.

Perhaps Mr. Yarchan’s legal counselors are unaware of Articles 6 and 7 of the Mexican Constitution about freedom of expression, freedom of the press, and the right of publication in Mexico. As stated in the Constitution, this right is non-negotiable. Regarding other possible threats or intimidations, The Yucatan Times has the right to appeal to the “Mechanism for the Protection of Human Rights Defenders and Journalists” to guarantee its staff’s safety, freedom to publish and to leave a legal record in this regard.

I would like you to know I totally support my government officials and all of the people in the country that has adopted me. Many expatriates are afraid to voice my sentiments themselves out of fear of reprisal from the small group of expats that take this beautiful country for granted. I am not using my full name as I have already been threatened by this group.

Thank you for shining a light on a few expats in our community. I’m sad to learn of these events. I remember the day when Mrs Cindy Morrissey asked our community to only give their donations to Wade Yarchan. Seems she deleted that post. I love it here and have great hope for our community. I wish to remain anonymous due to all the vile threats being made. I applaud your efforts to expose the truth!

We moved to Chelem full time in 2016. We have met and love the local people. We appreciate their traditions. We love the food. Too much in fact lol…we love all of it. We are permanent residents but are not Mexican citizens. When we first came here we were told that we could not get involved in local politics in any way, shape or form.

I cannot believe the conduct of some of the expats from the United States and Canada. When I heard how the expats were treating the Comissaria and her husband I was furious! I was angered that they allowed their own egos. I completely disagree with the way they have and are behaving. They do not even live in Chelem! Why are they trying to disrupt our little village?

I hope that the local people realize that we are not all mean and disrepectful people. I try to help the local community through Chelem Apoyo, No Mas Peritos and we donate food and money whenever I can. I do not broadcast what I am giving. I prefer to give anonymously. I wish the other expats felt the same way.

I completely support our local government. I hope these people causing trouble are silenced.

Moving to the Yucatán has made me feel reborn. I am inspired by the kindness of the people, humbled by the magnificence of the art and culture, and excited to see what new treasure I will discover every day. Seeing other Americans and Canadians disrespect this community is both shameful and embarrassing. I’m not sure what arrogance entitles those to think that they can move to a foreign country and have any say in its processes or demand change. I hope that these behaviors don’t affect our standing here because I, for one, am thankful for everything that my new home has allowed my life to become. ¡Viva Mexico!”