Among its arguments, the controversial initiative affirms that the existence of a social regulation over the real estate markets will avoid “blood spilling in Mexico”.

In her Twitter account, Senator Lilly Tellez wrote: “this neo-communist government is going for expropriation,” and posted the text with a summary of Narro’s proposal obtained through the Legislative Information System. 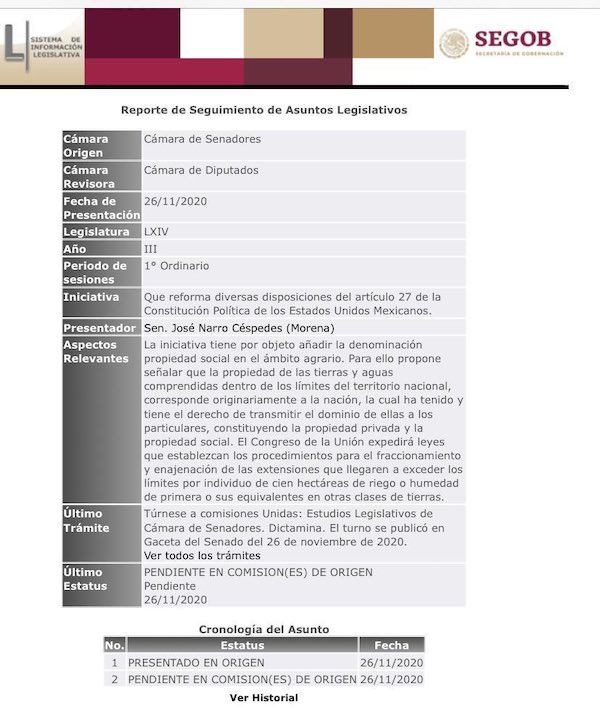 The Morena candidate for the governorship of Zacatecas David Monreal argues that the real estate markets, in part, have led to “abuses and dispossessions .”Let’s be realistic. The incorporation of ejidal and communal property to the real estate markets, registered since 1992 under the legal conditions that have been in place, has become a hint of abuse and dispossession. Even more so, those who have less income always lose out because of the wave of extractive activities that have taken place since then. In the heat of successive constitutional amendments on mining matters initiated that same year, it began to unfold in the country and to unrestrainedly depredate not only the patrimony of the owners of the land but also the environment and natural resources (…)”.

Banning possession
The proposal, which seeks to give priority to social rather than private use, would prohibit large numbers of land holdings:

“(…) by strengthening the character of the social property to the ejidos and the communities, not only is it intended to influence the agrarian property system and to shield the patrimony of the peasant families, but also to activate and deepen the system of rural development planning, both to effectively crystallize agrarian governance, to sustain (…) the National Development Plan 2019-2024 (…)”.

The Senator, in his arguments, affirms that these reforms will avoid “bloodshed in Mexico”:

“History has shown (…) that structural agricultural processes, such as the accumulation of wealth through land grabbing, are long-lasting and cyclical (…) if we know that this process is already with us again and we already know its harmful effects on the agrarian structure of our country, the most advisable and prudent thing to do is to take the appropriate precautions so that its dramatic effects are not repeated. In the Revolution, so much blood was spilled in vain that we have not learned the lesson?

Hours later, the Zacatecas legislator responded to Téllez that the expropriation of ejido lands is being sought to strengthen the ejido as an instrument of economic development.

Dangerous proposal: PAN
For his part, the federal deputy for the PAN, Mario Mata, described as “dangerous” the initiative on “social property,” which seeks to impose a limit of one hundred hectares per owner and leave open the possibility of dividing and disposing of the surplus.

The initiative to reform article 27 of the Constitution, whose intention is to prevent a single person from owning a large land area, would divide the properties into two types, private and social; however, the social property could not exceed 100 hectares.

If the law were approved, any person who has more than 100 hectares of “social property” would be obliged to divide his land, and the authority would have the power to alienate or expropriate the rest.

The initiative set off alarm bells because the initiative’s entire content to reform Article 27 was not passed on to legislators for analysis. It is suspected that Morena will secretly and in a hurry, approve the law.

With information from Senator Lilly Tellez, Mexico, Senate of the Republic.