The powerful supermarket chain affected industry partners and customers to pocket millions during the pandemic discount season. Their lack of solidarity is already known to Mexican authorities, but nothing is stopping them.

MEXICO (EMME EQUIS) – “El Buen Fin” has a villain: Walmart. One of the country’s largest retail chains, dealt low blows this season to its industry peers and its own customers to maximize its profits in the pandemic.

Its executives approved, for the second year in a row, to break with the Good End -from November 9 to 20 – and to create its concept called “Fin Irresistible” -Irresistible End- which ran from November 5 to 16, that is, it began offering discounts four days before all its competitors.

That was intended to get Mexican shoppers to use their savings and credit cards with Walmart first, causing Buen Fin to lose thousands of customers who had already stocked up or spent their money.

As the most powerful retail chain in the country, Walmart was able to market all kinds of products in its “Irresistible End,” leaving other businesses of all sizes and backgrounds unsold: it sold everything from television screens and smartphones to bottles of alcohol, and even furniture, auto parts, and floral arrangements. 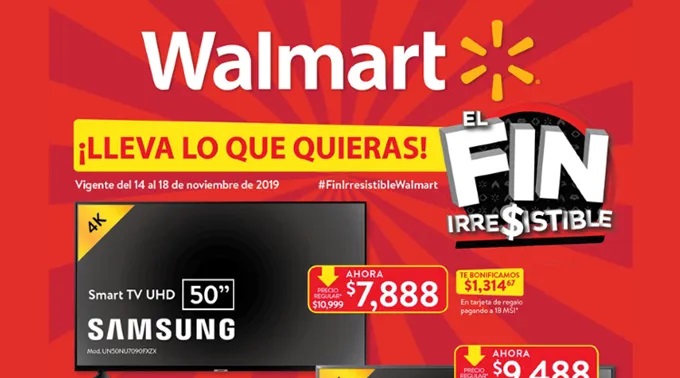 Faced with this low blow, the Confederation of National Chambers of Commerce, Services and Tourism (Concanaco) did not remain silent. Its president, José Manuel López Campos, accused Walmart of violating, once again, the agreement to compete with an even floor for Mexican merchants.

“Hopefully, this is the last time this will happen. We hope that in 2021 we will leave as we have said: that El Buen Fin we all do it together, and that includes the transnationals that are selling in our country,” said Manuel Lopez Campos.

So far, it is impossible to calculate the damage that Walmart caused with its “early bird” to thousands of businesses in the country, particularly small businesses, who saw in El Buen Fin as a hope to level the profits that were lost due to the confinement by Covid-19.

However, Concanaco estimates that Walmart’s measure will cause considerable damage and that the hardest hit will be the family businesses, from which it “stole” customers by abusing its economic power.

Also, the president of Canaco commented, Walmart’s behavior has set an example for other businesses, which this year 2020 also went through their discount days, putting at risk this year’s goal of reaching 118 billion pesos.

According to data from the Federal Consumer Protection Agency (Profeco), as of the morning of November 16, Walmart is the company that has concentrated the most customer complaints about the discount season, ahead of Liverpool, Elektra, and Office Depot, the other villains of November.

The most recurrent complaint is that the powerful retail chain of the multi-million dollar Walton family increased its prices days before the Irresistible End, only to lower them with false discounts, mainly in the area of electronic items.

The second most frequent complaint is that Walmart failed to meet delivery deadlines. Leaving its customers for days without the product they bought, which has alerted Profeco to the possibility that was knowing they did not have the necessary inventory, they sold thousands of products.

And the third is that they did not respect the discounts, bonuses, or interest-free months they offered and that they should apply to credit card payments.

“There have been more complaints, because they are also about clothes and shoes, especially about very confusing offers, because many clothing and shoe chains have put out offers that are a little complicated to understand. Also complaints about TV screens Walmart has received more complaints, especially about the issue of screens. 43 percent Walmart group, 7 percent, Elektra, Chedraui 3 percent, Home Depot another 3 percent,” said the head of the Federal Consumer Protection Office -PROFECO- Ricardo Sheffield.

Walmart’s deceptions and errors are on display on its Twitter account, @WalmartMexico, by dissatisfied customers who have not yet received the product, who purchased a defective item, or by simulated discounts.

“I saw an ad for a promotion, and on their page, there is another price, and they tell me they can’t do anything about it,” complained @Pamarikil on social networks. “I already raised my complaint with @Profeco because you don’t respect the delivery dates on consoles that were ordered and paid for,” tweeted @nessGDL. “The cashier put my product at 12 months without interest, and I told her 18, just to save you the promotion,” wrote @mascarini.

The three tweets were published within 30 minutes and accumulate in the retail chain account, which customers accuse of responding with automated messages and without following up in the call centers.

The official account of the Federal Consumer Protection Agency, @Profeco, has also exposed Walmart’s abuses, which could not be applied to customers, thanks to the government agency.

For example, @Profeco published a video on November 14 in which a conciliator from the Attorney General’s Office and a client of Sam’s chain – belonging to Wal-Mart – in Tijuana, Baja California, appeared, to whom the U.S. company did not want to make the price offered in a microwave valid.

“I want to thank Profeco. They made the store respect the price on a purchase”. The consumer says in the video, with more than a thousand   reproductions.

THE VORACITY OF WALMART – A HEADACHE FOR THE MEXICAN GOVERNMENT.
The giant American company’s greed has been a headache since the pandemic began for the Mexican government, specifically for the Federal Consumer Protection Agency.

In April of this year, one month after the World Health Organization (WHO) declared a global Sars-Cov-2 emergency, Walmart suddenly raised the prices of several products, just as people were doing more shopping than usual in preparation for the lockdown.

Many of the increases were unjustified and applied to basic foodstuffs for Mexicans, such as tortillas, eggs, beans, and sugar, among others, said Ricardo Sheffield. He also announced that several administrative proceedings would be initiated against Walmart.

The retail chain justified the increase in its prices in a press release, assuring that it resulted from the end of promotions with suppliers and for alleged disruptions in the supply chain.

After a series of conciliations between the supermarket chain and the Consumer Protection Agency, Walmart avoided an eventual fine of up to 4,700,000 pesos. It was able to advance, without setbacks, to the Irresistible End? Where, once again, it would raise its prices, its solidarity would be questioned, and it would once again become the villain of false discounts.