Trump, about to lose its brands in Mexico.

Trump owns the use of the signatures and logo “Trump” and “The Donald J Trump Signature Collection,” registered with the IMPI, and which expired one since 2015 and another in 2020

MEXICO CITY (El Universal) – Donald Trump lost the election for a second term as president of the United States. In Mexico, he can also cease to own the rights to the trademarks and logos with his name registered with the Mexican Institute of Industrial Property (IMPI).

Files held by EL UNIVERSAL detail that the trademarks “Trump” and “The Donald J Trump Signature Collection,” as well as its logo, expired one in 2015 and another since last September, so, in case of not renewing them, it would lose the rights over these trademarks. 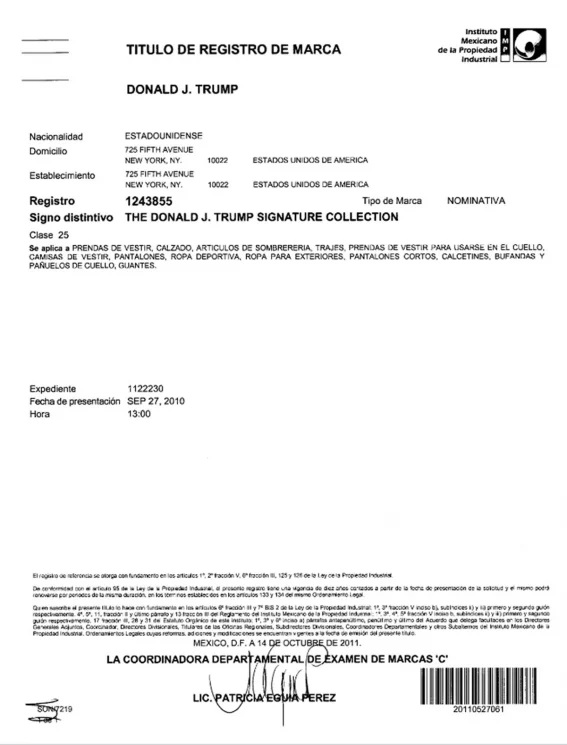 File 1122230 details that the trademark The Donald J Trump Signature Collection expired on September 27 of this year. It granted the rights of the name for its use in hotel services, motels, restaurants, bars, cafes, and, in general, services to provide food and beverages.

It also empowered him to use it on clothing and footwear. The document states that on September 27, 2010, the IMPI, through its representative in Mexico, María Teresa Eljure Téllez, gave him the trademark rights. Still, these expired ten years later, that is, on September 27.

As for its logo, the real estate magnate registered it to market furniture, chairs, clothes hooks, beds, office furniture, and even ivory sculptures.

Within the file there is a copy that Trump signed on December 14, 2005, to appoint seven lawyers – Jaime Delgado Reyes, Arturo David Reyes Lomelín, José Jesús Ortiz López, Enrique Alberto Díaz Mucharraz, Roberto Salgado, Juan Carlos Suárez, Luis Leonardo Sánchez Herrera and Guillermo Sosa Ruiz – as his representatives before the IMPI to carry out the necessary procedures to obtain the rights to his trademark in Mexico.

“I hereby grant you general power of attorney for litigation and collection and empower you to represent me in any contentious-administrative, judicial, or voluntary jurisdiction proceedings with any judicial or administrative authority.

“In this act, you are also authorized to request the Mexican Institute of Industrial Property to do whatever is necessary before the administrative and judicial authorities of any order for the protection of my interests. Sincerely yours, Donald J. Trump”, and above this, your signature.

Article 237 of the Federal Law for the Protection of Industrial Property states that the owner must request the renewal of a trademark registration within six months before the expiration of its validity.

However, it establishes that the IMPI will process those applications that are filed within six months after the expiration of the registration term.

“In case of failure to comply with the requirement within the indicated term, the registration will expire as of right, without the need of a declaration by the Institute,” states the IMPI.