The USA, on between violence and polarization: Trump insists: “I won the election!”

WASHINGTON D.C. (Times Media Mexico) – The U.S. president again claimed that the Constitution has been attacked “like never before” and said the media named Joe Biden as his successor ahead of time.

Donald Trump was very active on his social networks Sunday and has again used his Twitter account to insist that he is the winner of the presidential election. As usual, he accused the media of “promoting” Democratic candidate Joe Biden to the presidency ahead of time.

After a series of posts in which he develops his criticism of the press and his views on violations of the U.S. Constitution, the corollary is a text of just four words written in capital letters: “I WON THE ELECTION! This time, Twitter did not block his reading on Trump’s home wall but instead placed a commentary with a warning sign that “official sources” gave another result in the election.

I WON THE ELECTION!

“Why does the false news media continually assume that Joe Biden will ascend to the Presidency, without even allowing our side to show, which we are preparing to do, how shredded and violated our great Constitution has been in the 2020 election,” Trump has asked himself, starting a new series of messages questioning the results of the presidential election.

The still-president of the United States has again claimed that the Constitution has been attacked “as never before” and has stressed that a “large number of observers” were expelled from the count rooms in many states where the Republicans were favored.

“Even millions of ballots have been modified by the Democrats,” who would have used the support of the Dominion company “owned by the radical left” for that purpose, Trump has assured without presenting evidence of his accusations.

“Those responsible for safeguarding our Constitution cannot allow the false results of the 2020 postal election to stand,” the U.S. president has written.

This series of messages comes hours after Trump himself claimed that Biden won the election “because it was rigged,” since “there were no supervisors or observers”.

Trump said his rival and president-elect Joe Biden won the November 3 election but insisted that the election was fraudulent, continuing his months-long complaint of voting irregularities, which he has not yet proven.“He won (for Biden) because the elections were rigged. THERE WERE NO SUPERVISORS OR OBSERVERS,” he wrote on his Twitter account this Sunday, in a message in which he accused the company Dominion, “owned by the radical left,” of supplying “misleading” vote-counting equipment with the complicity of the false and mute media. 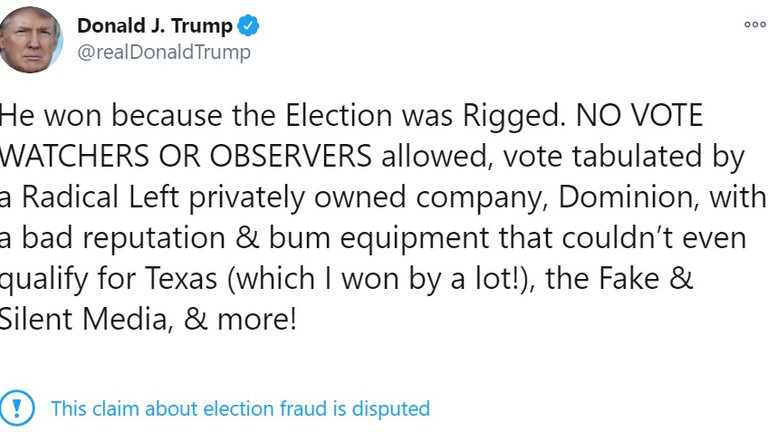 “All the mechanical ‘mistakes’ that occurred on Election Night were, in reality, Democrats who were caught trying to steal votes. But those who were not caught were very successful. The mail-in election is a sick joke,” he added.