Diego Maradona has been hospitalized, his doctor confirmed on Monday, November 2nd.

The former Argentine international, who turned 60 on Friday, was admitted to a clinic in the city of La Plata, about 60 kilometers from Buenos Aires, according to his personal doctor Leopoldo Luque.

Luque ruled out that Maradona, who is currently the head coach of Gimnasia y Esgrima de La Plata, is suffering from Covid-19 or a respiratory problem and clarified that he willingly was admitted for a general check-up.The doctor also confirmed that Maradona will spend Monday night at the Ipensa private clinic. 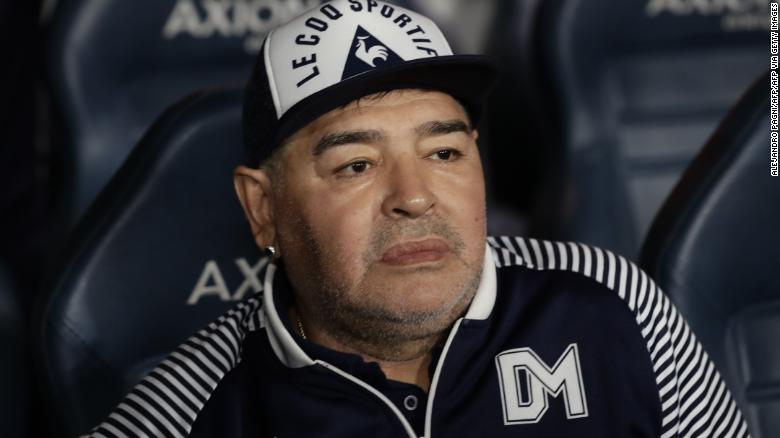 Maradona before the start of an Argentina First Division match between Boca Juniors and Gimnasia La Plata.

One of the best

In terms of memorable moments, not many footballers have delivered like ‘The Golden Boy’ Maradona.There was his “Hand of God” goal against England at the 1986 World Cup.

Quickly followed by his mazy, mesmerizing, weaving goal in the same game, that’s viewed as one of the greatest ever scored.

Perhaps no wonder then that when he returned as a manager of a club against a team he had previously played for, Maradona was presented with a throne to sit on during the game.

Widely considered one of the best players of all time, where his highs resulted in World Cup victories and a remarkable Serie A title for Napoli, but the colorful life Maradona has lived off the field has led to extreme lows, notably witht issues with addiction, substance abuse, illegitimate children, and feuds over money.

An unacknowledged son, photo ops with the mafia and cocaine binges were all documented in British Oscar-winning film-maker Asif Kapadia’s documentary on Maradona’s time at Napoli, arguably the period of his footballing career where he had the most success. 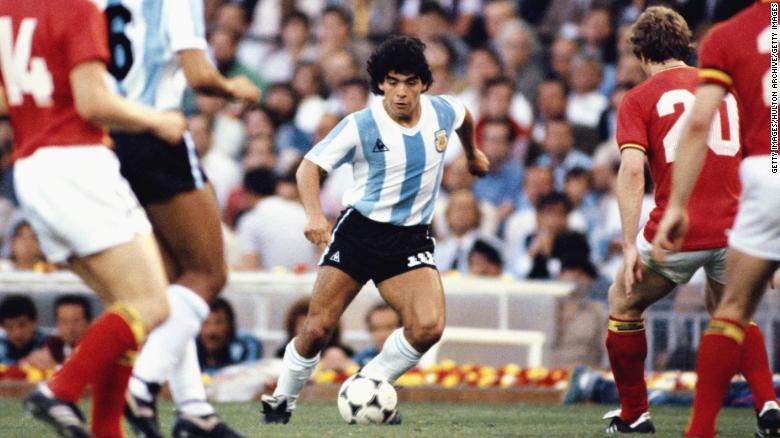 Maradona takes on the Belguim defence during the 1982 FIFA World Cup.But before the diminutive Argentine became one of the most recognizable people in the world, he was just a “little Black kid from the slum,” in the words of his former fitness coach Fernando Signorini.Born 1960 in the Villa Fiorito area of Buenos Aires, Maradona says football was his “salvation” which helped him to raise his family out of poverty before leaving for a world record transfer fee to Barcelona in 1982.

After being ravaged by injuries at the Catalan club, he was signed by Napoli, or, as one newsreader put it: “The poorest city in Italy buys the most expensive player in the world.

“During his time at Napoli, he almost singlehandedly won the club it’s first ever Serie A title, followed that up with its second a year later, won the UEFA Cup and won the World Cup with Argentina in 1986.

And while he is just one of many world-class Argentine forwards — he shot to prominence after Real Madrid great Alfredo Di Stefano and before Barcelona supremo Lionel Messi — it is Maradona’s chutzpah which separates him from the rest.

“If he hosts a TV show, it’s the most amazing and surreal TV show anybody has ever seen,” Argentine journalist Marcela Mora y Araujo wrote for CNN.”If he enters a room, people stand in ceremony and tell the tale for years after how they were in the room when he entered it. Power. Charm. Talent. And the ability to be seen to be frail, vulnerable, and imperfect with it.”

Taking the world by storm

He was a household name before it, but the 1986 World Cup in Mexico was where Maradona shot to stardom.A 26-year-old at the peak of his powers, Maradona scored twice en route to the quarterfinals. And it was in that iconic game against England where he took center stage.In the 51st minute, he rose, out-jumping England’s legendary keeper Peter Shilton, with his arm stretched up, closed fist, and simply punched the ball into the net in what he called the “Hand of God” afterwards. 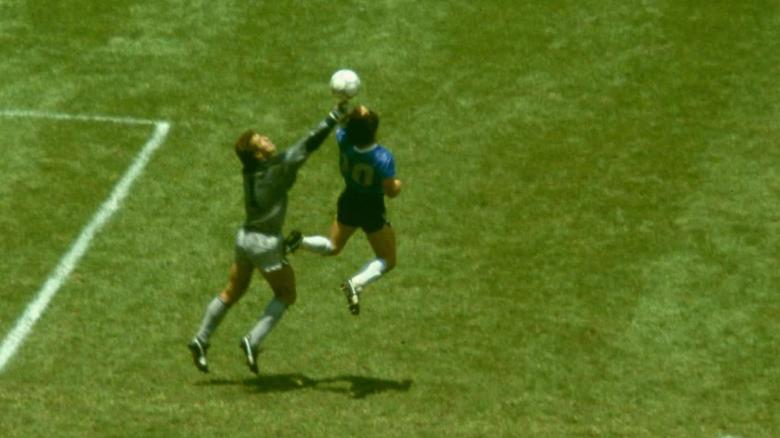 Maradona outjumps Peter Shilton to score the “Hand of God” goal in the 1986 World Cup.As Mora y Araujo wrote, “As shocking as it was unfair, the tension only rises as the fans inside the stadium and watching on TV wonder if the goal will stand.”And if his first goal showed his impish, cheeky side, Maradona’s “Goal of the Century” that followed just four minutes later showed the brilliance of the man.

Receiving the ball on the halfway line, Maradona dribbled past seven English defenders before slotting past Shilton”Each one ‘left for dead’ as the English commentator said at the time. Each one with a stunned look in their face, a mixture of horror that this was being done against them and admiration that they had such exclusive access to witness this marvel,” Mora y Araujo said. 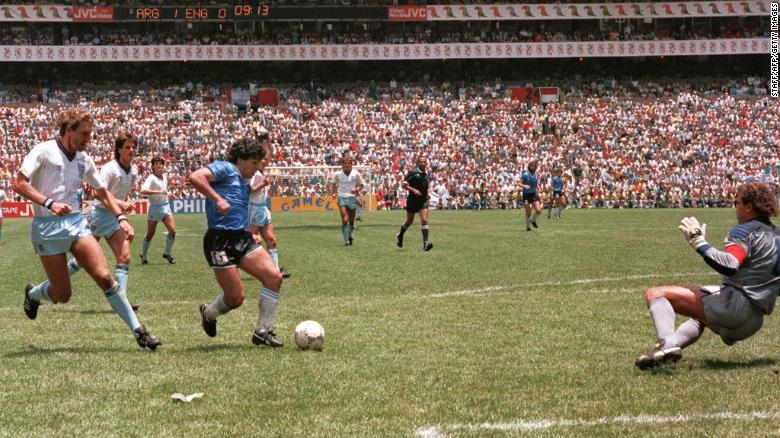 Maradona runs past English defender Terry Butcher (left) on his way to dribbling goalkeeper Peter Shilton (right) and scoring his second goal against England in the World Cup in 1986.

While he was playing the best football of his life in Mexico, Maradona’s personal life was not going so well.His mistress Cristiana Sinagra was back in Italy, heavily pregnant with Diego Armando Maradona Sinagra. For years he refused to acknowledge paternity and did not meet his son until 2003.

Kapadia’s film shows occasions when Maradona came into contact with the Camorra — the Neapolitan mafia — with the documentary flashing up photographs of the footballer smiling alongside members of the crime syndicate.

As a Napoli player at the height of his addiction, he would party from Sunday to Wednesday, Maradona describing how he would return home and lock himself in the bathroom to hide from his infant daughters. 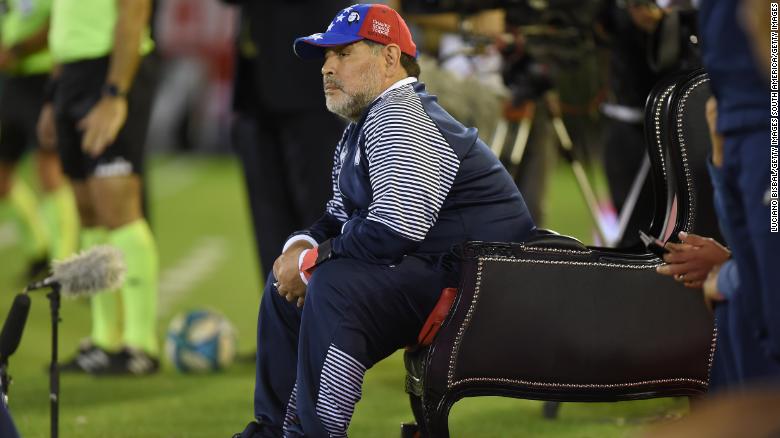 Diego Maradona directs his Gimnasia team from a pitchside throne.

Following a failed drug test in 1991 and a 15-month ban from football, his career on the pitch fizzled out. While he had stints in Spain and back in Argentina, he failed to reclaim that form which dazzled fans and opponents.A nomadic managerial career has followed his playing career. It has taken him from the Argentina and Mexico to the United Arab Emirates, with each club laying out the red carpet — or the throne in Newell’s Old Boys’ case — for the footballing legend.