Merida, one of Mexico’s cities with the most potential.

According to a new study, Merida is one of the three cities in Mexico with the most potential.

MERIDA YUCATAN (Times Media Mexico) – Merida ranked as the third most competitive city in the country, after the Valley of Mexico and Monterrey, according to the 2020 Urban Competitiveness Index (ICU) of the Mexican Institute for Competitiveness (Imco).

The study, which evaluates 73 cities with more than one million inhabitants based on 70 indicators, puts the Yucatan capital in first place in terms of public and legal security, presenting the highest percentage of respondents who report feeling safe on the streets (71%); in Villahermosa, in contrast, only 7% made that reference.

Of the 73 cities surveyed, only in Merida and Saltillo did more than half of those surveyed say they feel safe on the street.

Mérida also ranks first in quality of life for its inhabitants in three areas: education, inclusion, and health (notable for the number of health personnel and hospital beds); second in the local political system sub-index, for its civil society organizations; and third in the Efficient and Effective Governments sub-index, for positively influencing the city’s competitiveness, and in the Precursors sub-index, which measures the financial, telecommunications and transportation sectors. 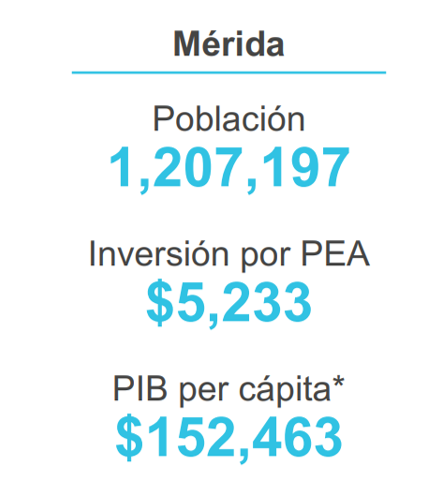 It is worth noting that, in addition to the above, the city is also recognized as one of the cities with the lowest homicide rates, along with Orizaba, Veracruz, and Saltillo, Coahuila.

The Imco has been studying Mexican cities’ competitiveness for ten years since they generate 87% of the GDP, are home to 64% of the population, and concentrate 89% of the investment.

The ICU measures Mexican cities’ capacity to generate, attract, and retain talent and investments; that is, it measures how competitive they are according to the IMCO definition.

In a statement, the City Council reported that the significant work based on transparency and regulatory improvement of the administration headed by Mayor Renan Barrera Concha had been a determining factor for Merida today to be positioned nationally among the three best big cities (with more than one million inhabitants) to invest.

Good municipal practices in terms of regulatory improvement promoted by the City Council made the Yucatan capital stand out, according to the IMCO’s Urban Competitiveness Index 2020, he says.

This recognition places it as the third most competitive city nationally, after the Valley of Mexico and Monterrey, Nuevo Leon.