The Secretary of Finance, Arturo Herrera, was optimistic about the rating of Fitch Ratings.

Arturo Herrera, Secretary of the Treasury and Public Credit, reported this Wednesday afternoon that Fitch Ratings ratified Mexico’s credit rating with a “stable outlook”, which is “good news” for the next fiscal year.

Through his Twitter account, the official shared a statement and explained that Fitch’s position “They highlight our consistent macroeconomic policy framework, sound external finances and a stable debt level.”

In a following tweet he noted: “This is good news, which together with the expected approval of the # Budget2021 this week, allows us to prepare for the next fiscal year ”. 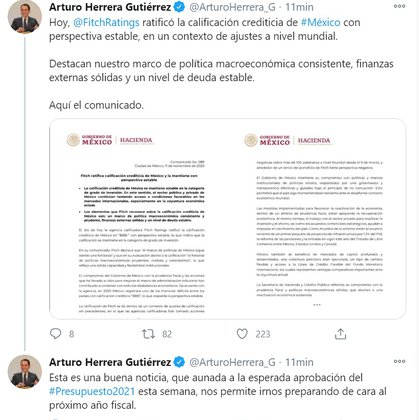 The message of the Secretary of the Treasury

According to the statement issued by the Treasury, Fitch Ratings ratified Mexico’s credit rating as “BBB-”, with a stable outlook, “Which indicates that the rating remains in the investment grade category.”

“In its statement, Fitch highlights that ‘Mexico’s policy framework continues to be a strength’ and that in its evaluation it paid for the rating ‘andl track record of prudent, credible and consistent macroeconomic policies’, reflecting strong institutional capacity and flexibility”Added the document from the Ministry of Finance.

According to the same text, “in 2020 Mexico will register one of the smallest deficits among countries with a ‘BBB’ credit rating, which supports the stable outlook.” 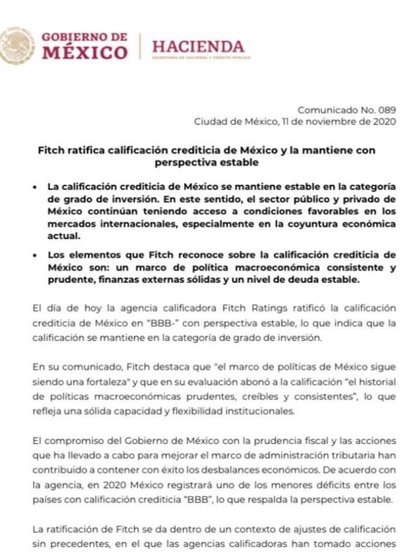 The Treasury highlighted that economic imbalances have been contained thanks to the Mexican government’s commitment “to fiscal prudence and the actions it has taken to improve the tax administration framework.”

Later in the statement, the Secretariat indicated that the government maintains its commitment to policies guided by the principle of non-corruption, which will allow the country to remain “Resilient to the challenging global economic context.”

He also highlighted that the measures to favor the reactivation of the economy are carried out within an area of ​​fiscal prudence and work is done with the private sector to “Reactivate investment and savings.”

The second part of the statement

He added that as a sample of the strategic trade agreements “there is the recent announcement of a first package of infrastructure projects for 1.3% of GDP, the pension reform and the entry into force this year of the Free Trade Agreement between Mexico, the United States and Canada ”.about:blank

At the end of the document it was stated: “The Ministry of Finance and Public Credit endorses its commitment to the fiscal prudence and sound macroeconomic policies, which contribute to a sustained economic reactivation ”.

Just last September Fitch Ratings had lowered the forecast for Mexico. His estimate was that the Mexican economy would fall 10.8%. 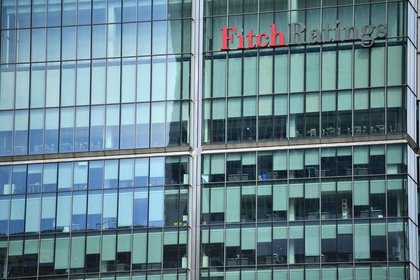 According to the rating agency, the high number of fatalities produced by the COVID-19 health emergency in the country and the economic disruption caused for the same reason have affected the investment climate. After the crash, the recovery will be slow due to the government’s tight fiscal stance.

“Investment has fallen very steeply, possibly reflecting investor perceptions of the investment climate as well as disruptions related to the virus,” he said.