The Relentless Shrinking of Trump’s Base

“The decline, a demographic iceberg, is mainly driven by aging, has continued since 2016. The number of voting-age white Americans without college degrees has dropped by more than five million in the past four years”.

NEW YORK United States (The New York Times) – In 2016, Donald J. Trump confounded the polls in part by generating an unanticipated level of enthusiasm and turnout from a group that had grown increasingly apathetic about elections: white voters without college degrees.

But in 2020, Trump and Joe Biden Jr. face a drastically changed electorate. The cohort of non-college-educated white voters — who gave Mr. Trump just enough of a margin to win the election in 2016 — has been in a long-term decline, while both minority voters and white college-educated voters have steadily increased.

The decline, a demographic iceberg, is mainly driven by aging, has continued since 2016. The number of voting-age white Americans without college degrees has dropped by more than five million in the past four years, while the number of minority voters and college-educated white voters has collectively increased by more than 13 million in the same period. In crucial swing states, the changes far outstrip Mr. Trump’s narrow 2016 margins.

Trump’s campaign leaders are betting that a two-year grass-roots mobilization that has yielded significant voter registration gains will overcome the demographic disadvantage and the polls, again. White non-college-educated voters continue to show enthusiasm for Trump and Republicans — not just in approval polls that have been remarkably stable for four years, but also at the ballot box in 2018.

Two years ago, even without the president on the ballot, white voters without college degrees turned out in numbers not seen in a midterm election in decades. 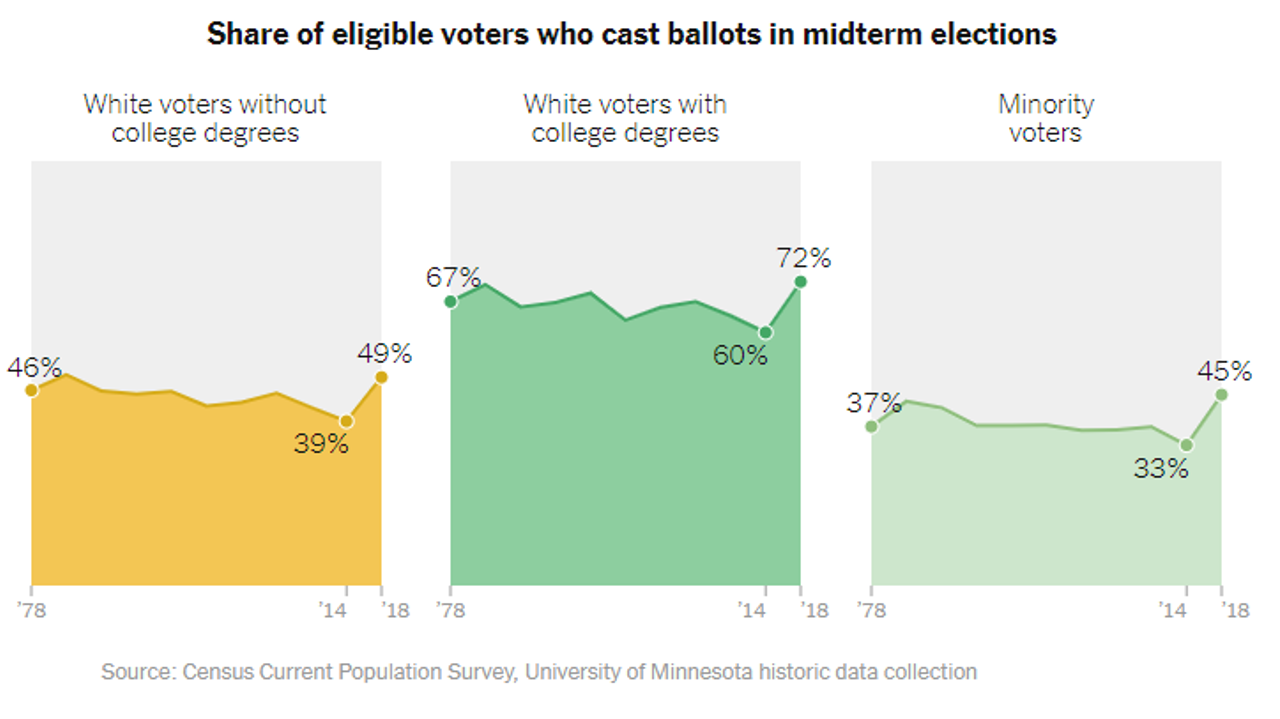 Until now, Trump has shown little interest in expanding his appeal beyond that base, and his campaign has been working on a strategy of finding more such voters. In some key states, including Pennsylvania and Florida, new Republican voter registrations have outnumbered new Democratic ones. But Trump has appeared to generate a countervailing enthusiasm among both educated white voters and minority voters. The turnout of both groups spiked in 2018 as well.

The result was the 2018 blue wave in which the Democrats took over the House of Representatives. In 2018, other groups closed that enthusiasm gap. If that happens again, Trump’s advantage will diminish.

This demographic divide has become a bellwether for political preference: A Trump coalition of white voters without college degrees and a Biden coalition of college-educated white voters — especially women — and minority voters.

Shifts in swing states
If Trump is to turn out new voters, there are plenty in swing states, which remain bastions of the non-college-educated white vote. But most of these states have also been undergoing the same changes in the electorate as the country as a whole. 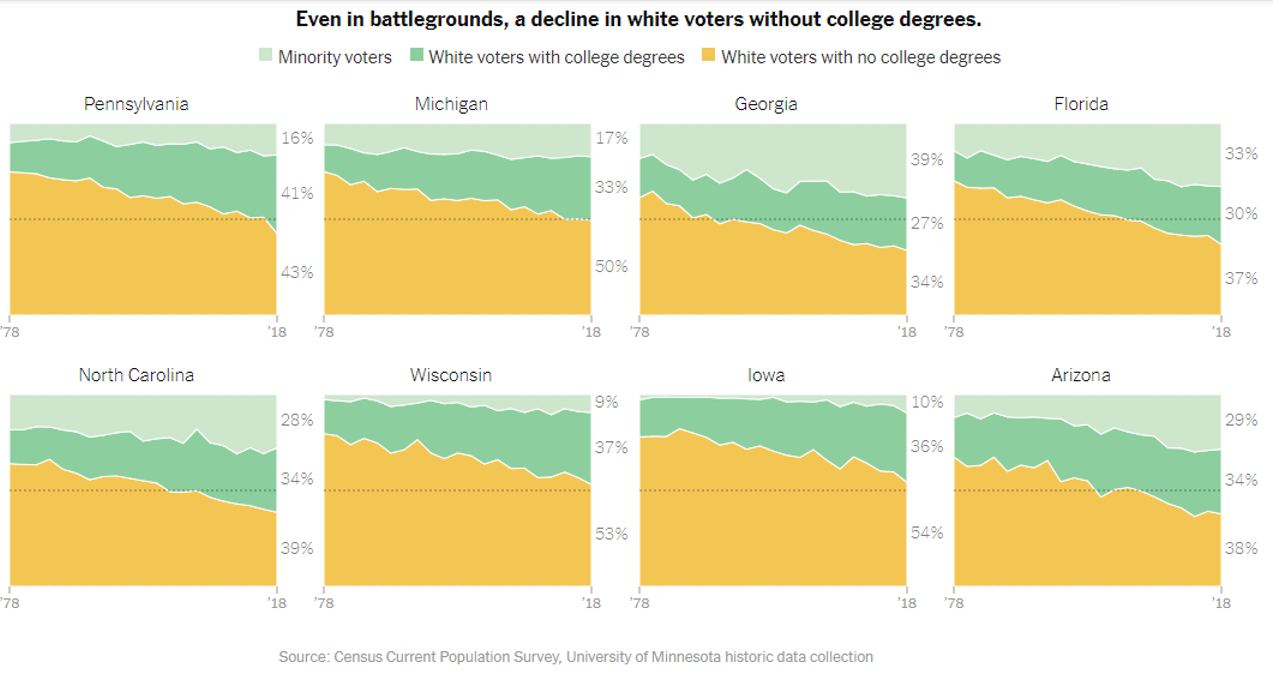 Compared with Trump’s tiny 2016 margins in some of these states, the demographic changes since then are a tsunami, especially in critical states like Pennsylvania, Wisconsin, and Michigan. 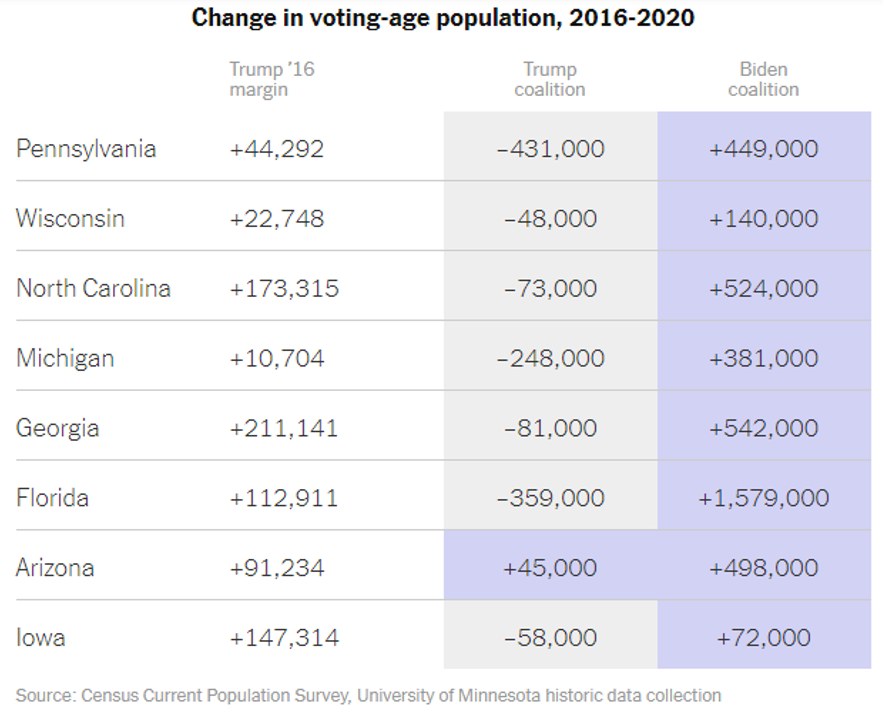 According to Jeffrey Passel, a senior demographer at the Pew Research Center, recent pandemic-related difficulties in reaching survey respondents by the Census may overstate the current white population. “So you may be understating the change,” he said, especially for Hispanics and other people of color.

The impact of age
The demographics’ changes are primarily driven by aging: The non-college-educated white cohort is older and steadily declining as its members die. The Biden coalition is younger and aging into the electorate.

So the changes are mostly at the margins: Younger voters are replacing those in the silent and older generations from Gen Z who tend to be better educated, much more Hispanic, and generally more liberal. Baby boomers, Gen Xers, and millennials will make up about the same proportion of the electorate in 2020 as in 2016. 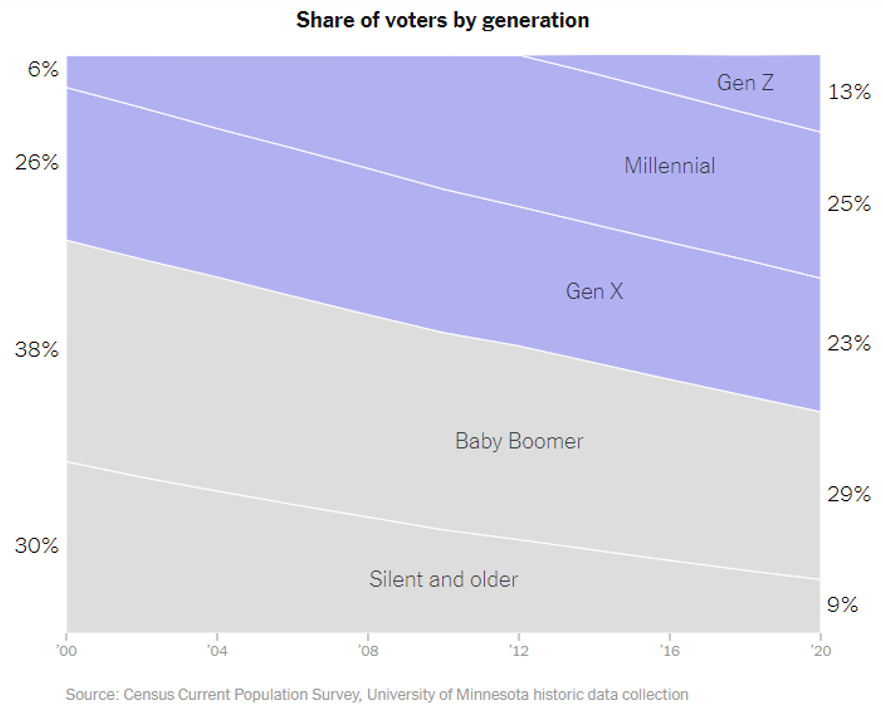 However, there is good news for Trump. Young voters are much less reliable voters — their turnout rate was 15 points below average in 2016. And although the silent generation has recently turned unfavorable toward him in the polls, its decline in the voting population might hurt him less.

Beyond 2020, these trends foreshadow further strengthening of minority and college-educated white cohorts at the expense of white voters without college degrees.