Deportivo Israelita used to bring Mexican Jews together, now the pandemic has separated them

On a recent visit, the normally filled premises were eerily quiet. The restaurant — in pre-COVID times packed with children running around all afternoon, shouting at each other and over their parents, who are spreading the latest community gossip — was completely empty at lunchtime. By the nearby pool, the library’s attendant — a woman who has worked there for decades — was pushing a cart full of books.

“If a member can’t go into the library, the library goes to you!” said Isaac Podbilewicz, the Deportivo’s director, as he watched the cart with a laugh from a restaurant table, referencing how COVID-19 had temporarily shuttered the library.PUBLICIDAD

Most of the outdoor infrastructure is open, while indoor spaces — bathrooms, theaters and other rooms, only about 30% of the entire club — have been closed during the pandemic. The Deportivo, as it is colloquially called, has also developed an app with which members can reserve a pool lane, or a machine in the gym, so as to not overcrowd the space.

But most have stayed away, wary of the contagious virus and heeding warnings from Jewish leaders. For 89-year-old Maia Wajsfeld, who became one of the center’s first members after it opened in the 1950s, it has been “the worst thing that has ever happened to me.”

“I would give my life for the Deportivo,” she said on the phone, from quarantine. “The Deportivo is my life.”

With 18,000 members, the Deportivo is arguably the most important Jewish institution in the country, bringing together the country’s separate insular communities to socialize, unify and strengthen their Jewish identity. Coming from over 20 different countries, the Jews of Mexico are sharply divided, by their ancestral places of origin and their religious customs: Ashkenazi and Sephardic; Jews from Aleppo and Jews from Damascus; Orthodox and Conservative. 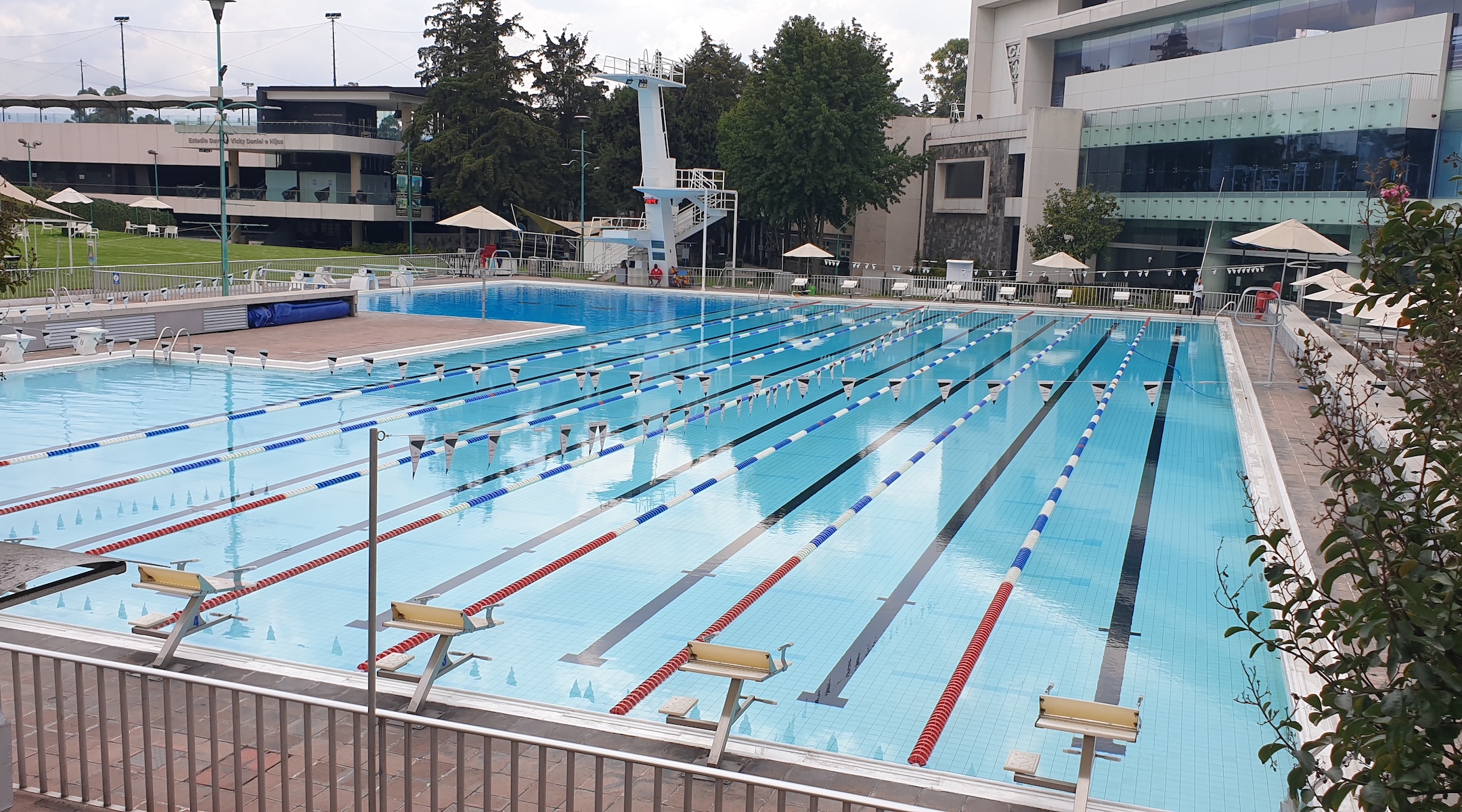 A view of one of the Deportivo’s now-empty pools. (Alan Grabinsky)

The vast majority of the country’s 50,000 or so Jews live in the capital city, which fans out for about 573 square miles, more than New York City. Each community has its own network of synagogues, schools and community centers, often only a 15-minute drive from most member’s homes. Most of the communities tilt towards the Orthodox end of the religious spectrum; there are only two active Conservative synagogues, and no institutionalized Reform services take place in the city.

In this highly fragmented space, the Deportivo prides itself on being “La casa de todos” (“The house of everyone”). Historically, it has been a secular space, and one of its most visited days is Saturday, the Jewish sabbath. More recently, though, coinciding with a larger communal trend towards religiosity, it has opened a small synagogue and hosts daily prayers, much to the dismay of many of its more secular Ashkenazi founding members.

In the 1950s, the Deportivo was established on what was back then a cow-ridden pasture in the outskirts of Mexico City. During the earlier days, being a member was equivalent to being an active part of the Jewish community. In the 60s and 70s, it was akin to a Catskill resort in the Borscht Belt, of the kind depicted in “The Marvelous Mrs. Maisel” — a place to see and be seen, for flirting, and for entire families to hang out together.

“Back then, the Jewish communities were even more divided than they are now,” said Wajsfeld, who was present at the ceremony when the center’s first stone was laid. “It was the first time that all the communities came together.”

It was in the Deportivo’s Muro Curvo, a mythical curved wall that has been torn down to make way for a four-story building, where Majsfeld’s son, who is Ashkenazi, met his future wife, a Syrian Jew from the Monte Sinai community (the Damascus clan) in the mid-70s.

Another highlight of the space is a massive mural created by Fanny Rabel, a student of the famed painter Diego Rivera. Painted in 1957, it reads from right to left in Hebrew and tells the Jewish story, from biblical times to the birth of the State of Israel, passing through the Spanish Inquisition and the Holocaust. It includes images of Einstein, Shalom Aleichem, and Freud metaphorically meeting Moses and Abraham. The ballroom where it’s located, known as “Salon Mural,” used to host delicious and popular Sunday buffet brunches, as well as Mexican presidents and Mexico City mayors. A fair share of Israeli leaders have also dined in it over the years, such as Moshe Dayan, Shimon Peres and, most recently, Benjamin Netanyahu.

Each year, the Deportivo also organizes the Aviv dance festival, a massive event drawing thousands of young people from across Latin America for a week-long Israeli dance competition. Last year, it hosted the Pan-American Maccabiah Games, drawing people from across the globe and receiving up to 10,000 people in a single day.

Since the 1990s, though, membership has been steadily declining by 3% each year, according to Podbilewicz. The trend coincides with a migration of Jews from central neighborhoods like Polanco and Condesa to the suburbs of Interlomas, Herradura and Bosques de Reforma. Most of the communal infrastructure followed and today many Jews currently live in all-inclusive buildings which offer many of the amenities found at the Deportivo.

“Before the 80s, being a member of the Deportivo was a matter of belonging to the Jewish community,” Podbilewicz said. “Now it’s still important, but no longer wholly a matter of identity.” 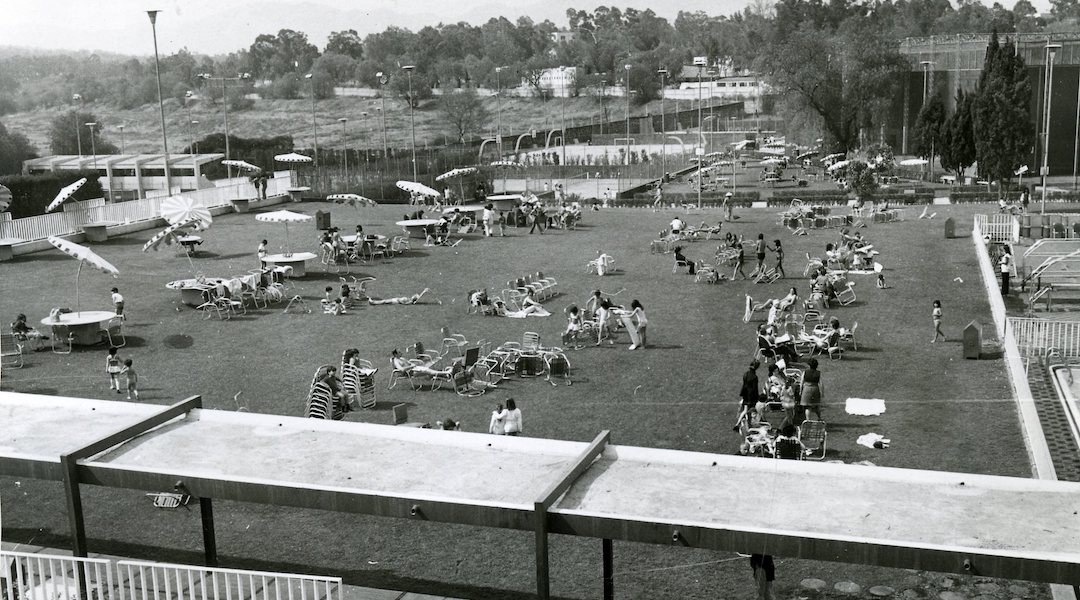 A view of the main lawn in 1964. (Courtesy of the Centro Deportivo Israelita archive)

The institution has adapted, creating a smaller branch closer to the region where most people live, which has a pool, a gym and multi-purpose rooms. It has also opened another large complex — an actual country club — located in the outskirts of the city, in the town of Tepoztlan.

The Deportivo was in the midst of celebrating its 70th anniversary, a year-long celebration starting in October last year, when the pandemic struck. The slowdown of activity and restricted entry has been a strain on the community. And with more than 80,000 official COVID-19 deaths, Mexico is among the countries hardest hit by the COVID-19 virus.

Yet Mexico’s Jewish community has remained relatively unscathed, thanks in part to draconian measures imposed by the community’s umbrella governing board — the Jewish Central Committee — in Jewish schools, synagogues and community centers. (In contrast, Mexico’s president, Andrés Manuel López Obrador, has been criticized for not wearing a mask in public and for taking a lax approach to the virus. Lockdown measures have been unevenly applied throughout the country.) As of early this week, close to 2,000 Mexican Jews have been infected and 21 have died, according to Tribuna Israelita, the community’s main communication channel.

While the Jewish community remains on lockdown — schools are closed and reservations are needed for synagogue services, which cap at 30% capacity — only the Deportivo remains open.

The staff has shrunk from 600 to 420 and, before COVID-19, 2,000 people visited every day. Now the number has gone down to 100, according to Podbilewicz. Until recently, entry was banned to anyone over the age of 65, precisely the generation who lived through the Deportivo’s golden age. During weekdays, a caravan of buses used to pick up dozens of elderly members; in the mornings, they could be seen engaged in book clubs in the library, playing domino on the outdoor tables, swimming and eating. An average of 350 elderly people visited the space every day.

Olga Zepeda, who ran the center’s Beyahad elderly program for seven years, said that the lack of access has caused a huge vacuum in these people’s lives. Before the pandemic, they would run into “long lost friends” from the Jewish community at the Deportivo, and “it was beautiful,” she said in an interview.

The thing that has perhaps best captured how crucial the Deportivo has been to Mexico City’s Jews is a video that was part of a recent internal fundraising campaign. As part of the thank you gesture for donating, members received commemorative bottles containing water — from the center’s pool.

“We will send to your home a liter of a liquid with which you’ve been in contact with since you were little,” member Aby Stern, grandson of one of the center’s founders, says in the video, while gesturing towards the pool.