MERIDA, Yucatan (Times Media Mexico) – Hurricane Delta, is advancing through the Caribbean Sea with a force of category four on the Saffir-Simpson scale, has put Quintana Roo authorities on alert in recent hours.

Although the trajectory forecast initially indicated that the system would not make landfall in southeastern Mexico, the hurricane changed its course, and now everything points to it impacting Puerto Morelos sometime in the early morning of October 7th. Furthermore, according to the report of the National Meteorological Service (SMN), it could do so as a category 4 hurricane, that is, with very violent winds that will move between 215 and 260 kilometers per hour.

Given the new direction the cyclone has taken, the governor of Quintana Roo, Carlos Joaquin, held an emergency press conference early Tuesday to explain the detailed information of the phenomenon and to urge the population to take shelter and prepare for the impact.

We now have Hurricane Delta. We have been following it up. It is a strong hurricane that is on its way to Quintana Roo territory, and we must all be prepared, attentive to this situation. The SMN is handling it over the Yucatan Peninsula, entering through Puerto Morelos at about 2:00 am on Wednesday morning.

In the northern part of the state, a Red Alert or Maximum Danger Alert was issued in response to the threat of the phenomenon. From the state of Yucatan, alerts were also activated, and recommendations were shared. For his part, Mexican President Andres Manuel Lopez Obrador announced that he would send more than 5,000 troops to the area. 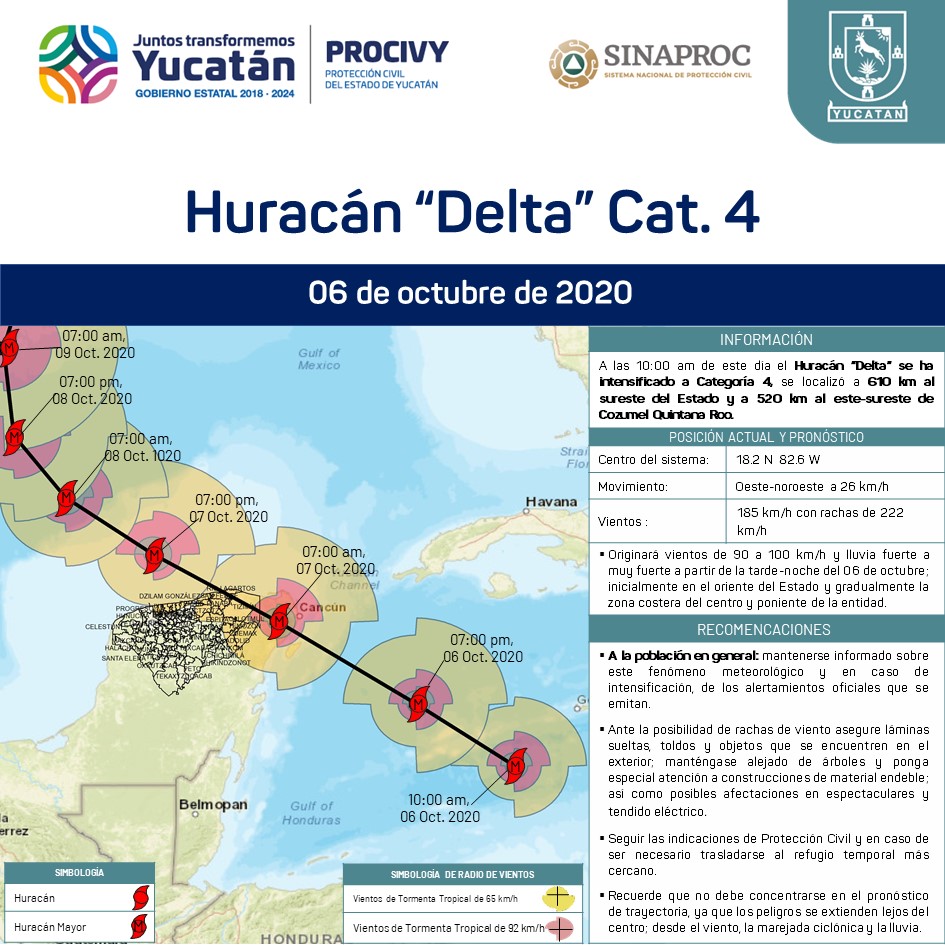 Delta Minute by minute.
Delta rapidly intensified to a category four hurricane, as confirmed by the U.S. National Hurricane Center (NHC) in an urgent statement.

“We recently received data from a hurricane hunter plane that indicates that Delta has become a category four hurricane,” the climate agency said.

According to the report, the system registers maximum sustained winds of 215 kilometers per hour.

10:00 (15:00 GMT): The National Hurricane Center of the United States (NHC for its initials in English) informed that a hurricane hunter plane of the National Office of Oceanic Administration (NOAA) detected that Delta already evolved to category three in the Saffir-Simpson scale, that is to say, its winds surpass the 179 kilometers per hour.

“It is expected to be an extremely dangerous hurricane when it reaches the northeast coast of the Yucatan Peninsula,” the NHC said.

09:40 (14:40 GMT): The governor of Quintana Roo, Carlos Joaquin, informed in a press release that they had begun the process of evacuating Holbox Island, Punta Allen, Cancun Hotel Zone, the tents of Kumate Hospital -also in Cancun-, the Hotel Zone of Puerto Morelos, Punta Herrero, Maria Elena Island, and Banco Chinchorro.

Essential activities (such as supermarkets) are maintained until 5:00 pm.

“After 5:00 pm EVERYONE must remain at home,” exhorted the head of the state government, Carlos Joaquín.

09:00 (14:00 GMT): the National Civil Protection System decreed Maximum Danger, or Red Alert, for northern Quintana Roo, in light of the approach of Hurricane Delta, which remains a category two.

It urged the population in the area to move away from the windows, take shelter at home, or in a temporary shelter until the authorities report that the danger is over, remain calm and stay informed.

08:00 (13:00 GMT): The governor of the state of Yucatan, Mauricio Vila, informed through a Twitter message that an orange alert (High Danger) has been decreed for the municipalities in the northeast, east, central, and north of the state. In the rest of the territory, the yellow alert (Moderate Risk) will be in effect.

In addition, a yellow alert, or moderate risk, was issued in Felipe Carrillo Puerto and José María Morelos. In Othón P. Blanco and Bacalar, the alert level for the effects that the cyclone will cause in the next hours is green, or “low risk.”

04:00 (09:00 GMT): Delta gained strength in the last hours in the Caribbean Sea and evolved into a category two hurricane on the Saffir-Simpson scale, with maximum sustained winds reaching 155 km/h, and more violent gusts of up to 185 km/h.

Prevention zone for winds with hurricane-force (over 118 km/h): from Dzilam, Yucatan, to Tulum, Quintana Roo -including the island of Cozumel, in Q. Roo-.

Prevention zone for tropical storm winds (between 65 and 118 km/h): from Dzilam to Progreso, Yucatan, and from Tulum to Punta Herrero, Q. Roo.