López Obrador decided that the raffle would go on — but the prize would no longer be the plane.Instead, it would be a “symbolic” cash prize divided among 100 winners.

Each winner would receive 20 million pesos, the equivalent of about $1 million, depending on the exchange rate.At the time, the government hoped roughly 6 million tickets would be sold at 500 pesos each, about $25.

The money raised would be used to pay the winners their money, and any excess funds would be used to donate medical equipment to the public health system — and also help maintain the plane ahead of any eventual sale. 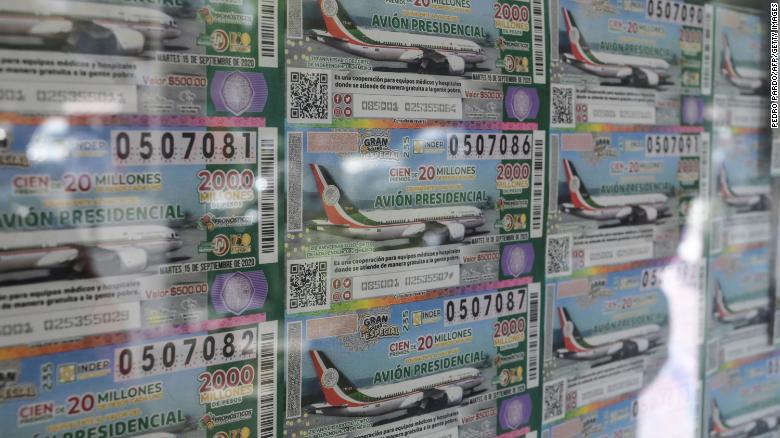 That plan, of course, requires people to actually buy the raffle tickets. And 500 pesos is steep in a country where government statistics show the average household only earned 16,500 pesos per month in 2018, about $825.

That’s likely part of the reason ticket sales weren’t great. An original plan to hold the raffle drawing in May was delayed due to lack of sales.Then came the coronavirus pandemic, which hit Mexico hard. More than 675,000 cases and 71,000 deaths have been registered.

As of September 11, the government said it had sold just under 4.2 million tickets valued at a total of around $105 million. The final amount will likely be marginally higher since tickets were sold through to September 15.

Of the earnings announced so far, the government will owe roughly 95%, or about $100 million, to the 100 winning tickets drawn on Tuesday. That leaves about $5 million left over, which the government plans to donate to the public health system.

But if the money was spread equally throughout the 951 public health facilities treating the country’s Covid-19 patients, each facility would receive little more than $5,000 each.

Or they could get lucky. The federal government has also effectively entered its public hospitals into the raffle, purchasing and distributing about 1,000 tickets to each facility — orabout 1 million tickets worth about $25 million in total. Should any hospital come up with a winning ticket, it will be allowed to use the $1 million in winnings to buy medical equipment.

Additionally, if no one claims a winning number, that sum will also be donated to the hospitals. But it is a game of chance.

For months, critics have accused the Mexican government of not adequately supplying hospitals with protective equipment or medical supplies through the entire pandemic, something the government has told CNN it denies.

They have not failed to notice that announcing that hospitals now might win more cash is not the same as drawing up a budget that adequately meets public health needs. In critics’ eyes, the raffle is a public relations distraction.