Once again, the Secretary of Tourism of Yucatan, Michelle Friman, tries to take over others’ achievements.

Yucatan’s Secretary of Tourism tried to hang on to the achievement of a Mayan cook on Netflix. A chef put her in her place.

MERIDA Yucatan (Times Media Mexico) – Once again, the Secretary of Tourism Development of Yucatan, Michelle Fridman, is involved in the controversy, this time with a chef who denies that her office has supported the cooks of Yaxunah, one of which is the protagonist of the series “Chef’s Table: BBQ,” which premiered a few days ago on Netflix.

The head of Sefotur -Tourism- tried to take over this achievement that the “fire masters of Yucatan,” as the cooks of Yaxunah are known, achieved by themselves, as the Chef Ricardo Muñoz Zurita pointed out.

Michelle Fridman posted a message on Twitter celebrating the world premiere of the series, in which Rosalía Chay Chuc puts the name of Yucatecan gastronomy on high. 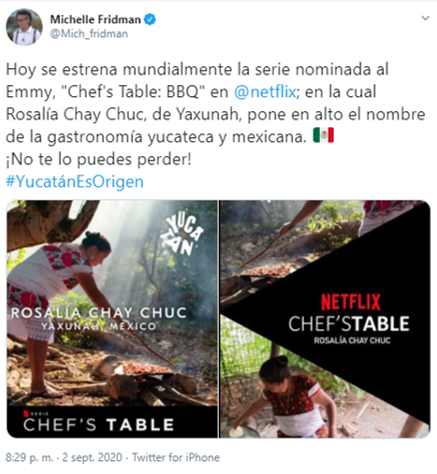 In response, Muñoz Zurita wrote her: “Respectable Michelle, the successes are not isolated or spontaneous, this is a work that has been done with them for years, initiated by chef Roberto Solis and told by me to the last power. And that’s how Netflix arrives with whom we have a good relationship”.

The Secretary of Tourism simply responded: “We always congratulate Roberto for his great enthusiasm and commitment to promoting tourism in the Yucatan. Greetings to you too, Ricardo”. 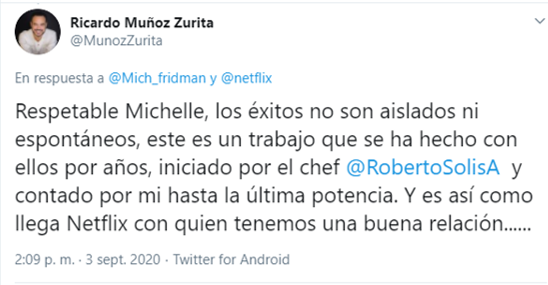 The Chef turned around: “I have proofs and facts, whenever I want, I can meet you with the fire masters of the Yucatan, because I’m sure you know them, but they don’t know you. You can see that I have treated you with respect, as you deserve, and I would like nothing better than to be denied because the festival (apparently it refers to the traditional cooks) has not been held for two years”.

Michelle responded: Ricardo, thank you for dedicating so many characters to me. I’m sorry to differ on so many issues: several programs have been implemented in Yaxunah, I’ll gladly share them with you in a more prudent space. 2) Of course, I know you, I have done countless events and promotions with you. Greetings”.

Ricardo Muñoz’s response was: “Michelle Fridman, I also celebrate the personal achievement of Rosario and all her colleagues in Yaxunah, and I am more than happy that you are aware of the program and the individuals of these women whom we have helped so much. I would like to ask you what plan of promotion and help you have for these women, because months ago, during the tropical storms, they were very devastated, and said for them they had not received any type of government help… They have not been taken into account at all.

–But I am glad you are aware of this. It was a shame we didn’t see her in Yaxunah and nowhere else in the state during the filming days when we were in Yucatan. But I’m glad you are proud of them and that you can finally have a rapprochement with them because I must tell you that they feel deeply ignored by you. And from your administration.

–I don’t think I have to tell you that I have worked with them consistently for over 16 years. They had a sinner’s UMA that they also lost for lack of support. But I’m glad you’re aware of the program, which is very media-friendly. Your administration is finally taking them into account in the gastronomy and that they’re getting some kind of support and no longer being ignored.

–I’m glad Rosalía was taken into account, but it’s a group of women from the community. Among them are Rosario Canul and many others because this is community work. I’m happy to give you a complete list of them.
-Rosalía is the protagonist because she is the landowner where I built the Mayan house that became the dining room, and there we made the tortilla area, which is the round palapa. And it was done there because it was the closest house to the village entrance, which helps.

–Every time we take buses in groups from all over the world to visit them. That’s how I took Rick Bayless, who later did a TV show with them as well. And when everything was ready to take many other professionals from around the world. 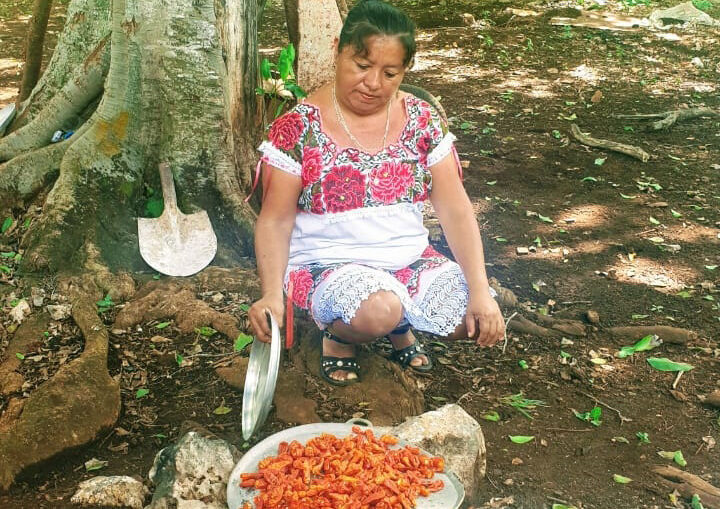 –Roberto Solis brought Rene Redzepi. It is worth saying that Roberto has also been a sponsor of this whole movement and that without him, this would not have been possible. No less important is the participation of Miriam Peraza, who, together with me, has permanently taken care of bringing them all the things they need. Thank you, Miriam Peraza Rivero, from Manjar Blanco restaurant. Without her, this program would not have been possible either. She has done such intimate things for the women of Yaxunah that I am not going to talk about, but she has been the fundamental base of all the help and assistance that we have given to these wonderful women.

–On a personal note, I would like Mrs. Miriam to be taken into account as well. She belongs to the group of the forgotten ones, not included in important gastronomic projects in Yucatan. It is a great day to celebrate a triumph of these women, and also that you are aware of all of them, and not just Rosalía, who I love very much, but they are many, and they all work together. It is community work.

-I remain at your service for any clarification. Above all, I am very anxious to know that based on these women’s triumph who have never been supported by you or by the Secretary of Tourism, you will take them into account and truly support them.

-Because if you know them (that’s the assumption on your Twitter), why haven’t you helped them? Right after the filming of the Netflix program, they fell into disgrace. How or when did the pride you express in them go? Did you forget that these women have been in hardship?

-I don’t understand why you send out this Twitter (which I’m glad you do) and haven’t remembered them during this time that they’ve needed so much help? Hopefully, this message will not be ignored.

-And if you need to see the houses destroyed and everything they need, but house by house, as I do, I take you or Mrs. Miriam that much knows this.

-I leave you a great greeting, and I am waiting to know what will happen with Rosario, Rufina, Benita, Margarita, Victoria, and Rosalia because they do need help. I am glad you know who they are to assist them as soon as possible because what they earn from their wonderful embroidery is not enough. And they missed the corn and chile crops. I think that’s all I have to say because I’m sure you already know or be informed. I’ll be glad to know that you help them, but not as a charity because they deserve it because they are great Mayan women. The true owners of the spirit and land of Yucatan, all for them!

-Postdata: I know you very well, but you don’t know me, because we have been introduced three times at events, and after your dismissive greeting, you have left without saying goodbye. For example, the last tourist Tianguis in Acapulco is why you are not aware of my work, because you have never deigned to stay a minute to talk, but it does not matter. I do not work for anyone. I work for Mexico, and that’s all that matters.

-What I do ask is that you don’t abandon the women of Yaxunah. Because I was delighted to read your Twitter, that leaves me with the great hope that now you will support and promote them as you did in your tweet. The task has already been done. They already know everything. The only thing missing is that you help and promote them.

The reality is one and one only. Throughout Michelle Fridman’s tenure as Secretary of Tourism, there have been countless events to which multiple Yucatecan chefs have been invited, but never to these women, owners of authentic traditional Mayan cuisine.

Or had you, dear reader, heard or seen anything from the Yucatan’s Tourism Board about them and their work before Netflix took an interest in their craft?