MEXICO CITY (AP) — Mexico’s president vowed Thursday to repay the country’s water debt to the United States, even if it means asking farmers in Mexican states along the U.S. border to pitch in.

Time is running out for Mexico to pay the debt by the Oct. 24 deadline, especially after protesters seized a dam in Chihuahua state to stop water transfers.

President Andrés Manuel López Obrador has said in the past he would appeal to U.S. President Donald Trump for “understanding” if Mexico couldn’t make the deadline, and on Thursday he once again thanked Trump for being “respectful” of Mexico on other issues.

“It is one of the things I have to thank President Trump for, that he has been respectful,” López Obrador said, noting the United States had interfered in Mexico in the past on other issues. “Before they used to get involved, as if we were not free and sovereign,” he said, adding “not anymore, and for that we are very thankful.” 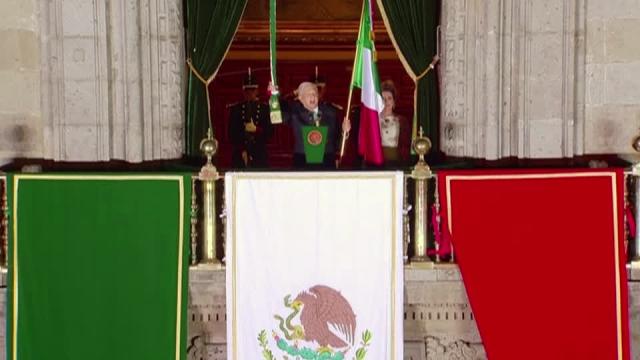 Mexican President Andres Manuel Lopez Obrador performed his ‘Grito de Independencia’, or ‘Independence Cry’ in English, from the balcony of the presidential palace in the centre of Mexico City. In keeping with quarantine measures, Zocalo square was largely empty as Lopez Obrador delivered cries of “viva!” to the country’s independence heroes. Mexico’s Independence Day commemorates the call to arms by rebel priest Miguel Hidalgo on Sept. 16, 1810 at the start of the country’s war of independence from Spain. “Viva Mexico!” is a current-day twist on rebel priest Miguel Hidalgo’s original call to arms against the Spanish colonialists more than 200 years ago. Mexicans eventually achieved their independence from Spain in 1821.

But it is unclear how much Trump can help in an election, with Texas farmers angry that Mexico has fallen so far behind in cross-border water sharing agreed to under a 1944 treaty.

More than a week ago, hundreds of farmers angry about losing water seized a dam in the northern state of Chihuahua, seeking to block the transfers that benefit farmers and towns along the Rio Grande.

With just over five weeks to go, Mexico still has to transfer almost a year’s worth of water to meet the deadline. The United States gives Mexico four times more water from the Colorado River farther west under the treaty, and López Obrador is apparently worried about the possibility of losing that.

López Obrador raised the possibility of asking farmers in other Mexican border states — an apparent reference to Tamaulipas — to pitch in if the situation in Chihuahua cannot be resolved.

He acknowledged that threatens to broaden the conflict, which has became a cause for the conservative opposition party National Action. López Obrador accused protesters of planning to seize the offices of the National Water Commission in Tamaulipas.