The Tiny Bug Devastating US Agriculture

In 2015, the agricultural harvests of southeastern Pennsylvania began to suffer shock devastation, losing an estimated USD$50 Million in a single season by 2018. Nearby, trees that had been standing for generations were bare and wilting, no chance of survival. Nobody knew what was happening, but everyone knew that the problem was getting worse.

The invasion actually began in 2014, the year that the Spotted Lanternfly, a foreign invader, arrived in the United States. The lanternfly, which appears as a combination between a ladybug and gypsy moth, began appearing at residential and commercial properties in mass that summer. Less than three months after its mysterious arrival, multiple counties declared a quarantine on this species, but to no avail. Females began laying eggs on countless surfaces, many undetectable and discrete. By the following spring, the damage was well underway,  and over the next three years, the lanterfly had migrated to much of the Mid-Atlantic region.

Initial damages led to a lengthy investigation into the origins of this cicada-family pest. After capture and research, it was discovered that this plant-hopping species is native to Southeastern Asia, namely Korea, China, and Vietnam. First discovered in 2006, much of the vandalism committed was reported in grape fields and vineyards of these native countries. But the ability to latch on to countless, inconspicuous surfaces was the real concern. It was concluded that the spotted lanternfly species made its way across the Atlantic on a shipment of smooth stone, and while investigators tried to pinpoint the origin, the initial spread across the Northeast region of the U.S. began. By 2018, when initial damages were estimated, police departments in the states of Maryland, New Jersey, and Delaware started receiving calls about this pest.

Attempts to locate and eradicate this population have been plentiful, but inconsistent migration patterns and no known, domestic natural predators have made this task nearly impossible. According to one study in Pest Management Science, without proper control, this lanternfly could cause lasting, long-term environmental destruction. 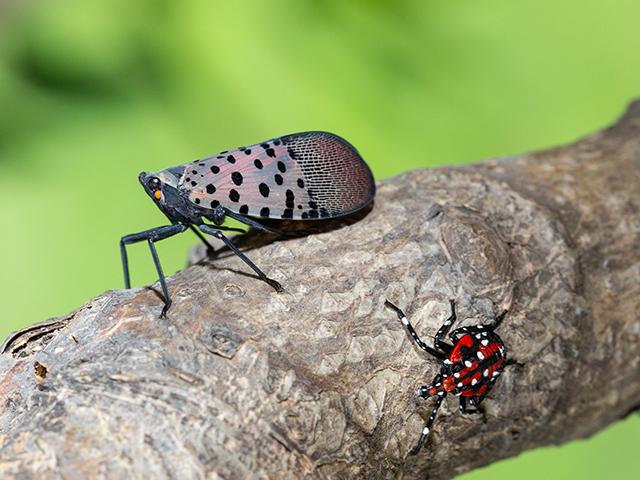 Unfortunately, management has proven incredibly challenging. A quarantine was placed in states where this insect has been established, which includes a small restriction on the transportation of certain goods that could reasonably be carrying SLF at any stage. This requires extensive inspection and human capital, and lacks sustainability. Adhesive has been tested on hosts as well, but this method affects non-lanternfly species. Most species also have a natural predator.

There are known predators in the lanternfly’s origin countries, but none currently exist within the United States, and efforts to bring natural predators over have been unsuccessful.  As solutions are continually tested, the lanternfly will continue to decimate its eclectic, seemingly ever-growing, array of hosts.

The Spotted Lanternfly is sap-sucking, which allows feeding on the inner nutrients of plants and trees. Vineyards and tree species are primary targets, but lanternflies have over 70 known prey. Resilience and adaptability, however, are perhaps these pests’ deadliest weapons. Adolescents, or nymphs, climb the stems of their planned hosts. Once high enough, they use a mouthpiece designed to dig into the stem, and siphon out nutrients that contribute to plant growth and photosynthesis. But, the journey to the top of the host can be grueling. 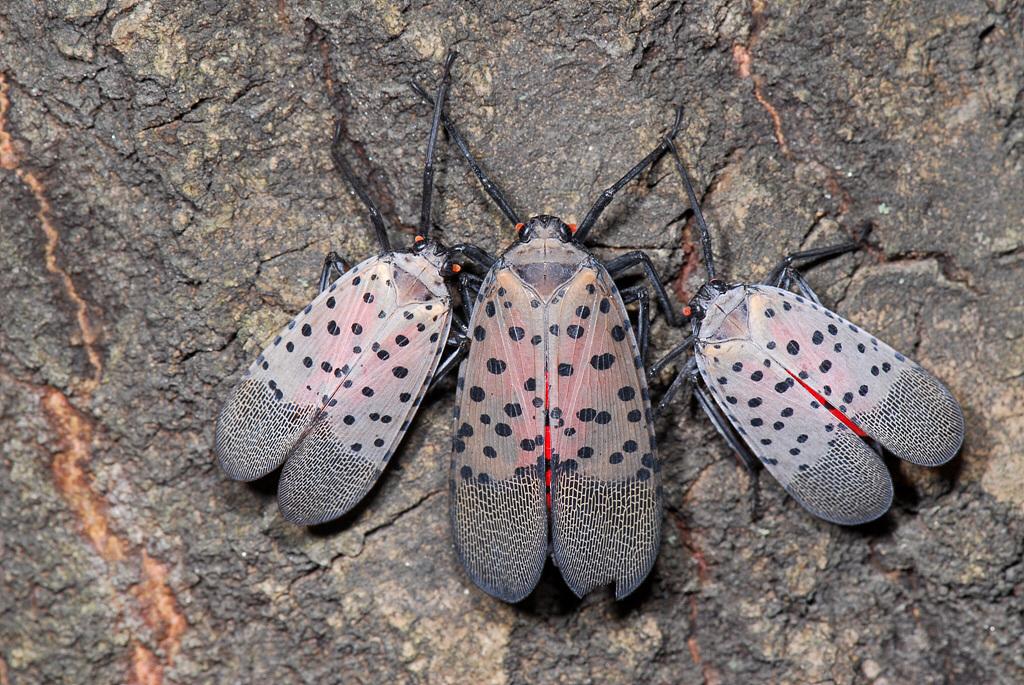 Lanternfly can be blown off their initial host via natural occurrences. When this happens, the initial mission can be aborted, leading to a new target. Researchers and conservationists have confirmed that these alternative attachments can be any smooth surface, from stone to fence posts to moving vehicles, to train cars. Movement also happens quickly, with lanternflies having an estimated hopping distance of 14-15 meters every 15 minutes.

The spread of the lanternfly is much attributed to this rapidly changing movement. After choosing their means of commute to new regions, females begin the egg-laying process, dropping anywhere between 30-50 eggs at a time. The location of eggs could be natural or man-made surfaces. According to researchers, the Fall and Winter seasons could be the best time to identify and destroy the vulnerable egg masses because once Spring hits, the initial hatching begins. Researchers at Pennsylvania State University estimate the cycle of hatching and destruction could cost USD $324 million and almost 3,000 jobs; others say it could be even greater.

The Mid-Atlantic U.S. is likely not the final destination for the Spotted Lanternfly. Climate suitability predicts these pests will not permanently settle until they reach warmer weather. The migration south could lead the spotted lanternfly to areas of South America and the Central part of Africa. Crops in areas such as the Democratic Republic of Congo and Eastern Brazil could be impacted. The economic consequences could be devastating. Rainforests and nature preserves in the area could be at risk as well. The Amazon Rainforest or the Pantanal could one day become host to the Spotted Lanternfly. Results could be environmentally devastating. While purely speculative for now, the need to track and control the lanternfly population is a certainty.

For The Yucatan Times
Dylan Volpintesta

Dylan Volpintesta is an experienced educator focused on building community and a civically, environmentally engaged society.