The St. Lucia airport site has an owner… and it is not the government.

Another alleged owner is fighting for St. Lucia; they have filed for protection. Zumpango Real Estate claims 71% of the 128 hectares where the airport is being built.

MEXICO (Excelsior ) – The 128 hectares of San Miguel Xaltocan, where the new International Airport is being built, apparently has another owner.

This is Zumpango Real Estate, which claims ownership of 71% of that land and joins Raul Romero Zenizo, identified by the Secretariat of Agrarian, Territorial and Urban Development (Sedatu) as the first owner of the area, which was declared as national land in April 2019.

The real estate company claims that in 1976 it bought 91 hectares of that land, as stated in the deed 510 volume 20, from the notary public number 21, Genaro Billarent Romero, based in Tlalnepantla, State of Mexico. 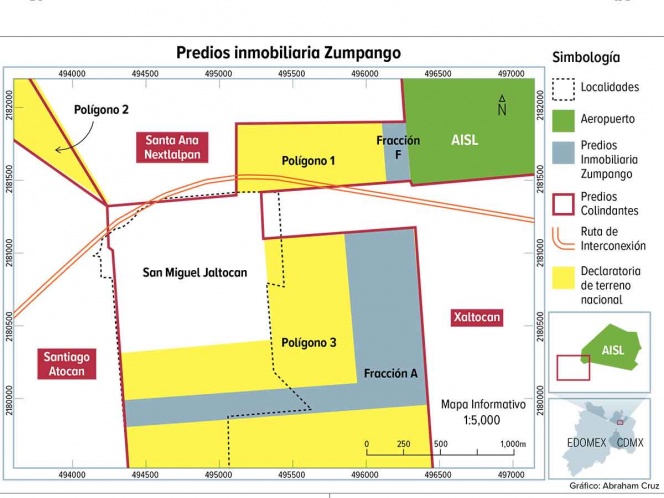 Now there are two owners of the airport.
Zumpango Real Estate raises its hand as the owner of most of the 128 hectares where the General Felipe Angeles air terminal is being built, located in the State of Mexico.

The 128 hectares of San Miguel Xaltocan, where the General Felipe Angeles International Airport is being built, do not have an owner. They have two. Zumpango Real Estate claims ownership of 71% of that land. It argues that 44 years ago, it acquired 91 hectares of that land.

Excelsior revealed that the Ministry of National Defense (Sedena) had recognized the private ownership of these lands. The Secretariat of Agrarian, Territorial and Urban Development (Sedatu) identified that first owner as Raúl Romero Zenizo. On the subject, President Andrés Manuel López Obrador maintained that “there is nothing to stop us from moving forward.

It is now known if Zumpango Real Estate is projected to be the second owner of the land that Sedatu declared as national land on April 26, 2019as well as another portion of 617 hectares adjacent to the new air terminal.

On April 23, 1976, Inmobiliaria de Zumpango bought from Romero Zenizo 91 hectares of that land – divided into two lots, one of 85 hectares and another of 6 hectares – in the Mexican municipality of Nextlalpan, as stated in the deed 510 volume 20, from the notary public number 21, Genaro Billarent Romero, based in Tlalnepantla, State of Mexico.

The tax for the transfer of ownership of both properties was made on May 6, 1976, before the General Directorate of Finance of the Government of the State of Mexico.

Inmobiliaria Zumpango requested an injunction before the federal justice granted and is awaiting a constitutional hearing, as in the process initiated by Romero Zenizo.

Inmobiliaria Zumpango, founded in early 1976, acquired part of the 265 hectares that Romero Zenizo obtained in co-ownership with César Escobosa Bernal, Eduardo Medellín Cortazar, and Genaro Escoboza Bernal, in January 1970, as a result of an award by auction, endorsed by the Thirteenth Civil Court in Mexico City, against Miguel Leal Gutiérrez. And of which the Notary Public number 31, Mario Monroy Estrada, testified.

In turn, Leal Gutiérrez bought 245 hectares from Susana McCann, according to deed 19,890 of October 10, 1962. Notary Public 117 from Mexico City, Rafael Enriquez Vidal attested to this transaction 58 years ago.

According to files consulted, the property of 265 hectares of reference was accredited in favor of Romero Zenizo and his co-owners since May 12, 1971. The notary public in the Judicial District of Zumpango, State of Mexico, Rita Raquel Salgado de Martinez.

Those 265 hectares were divided into six lots, identified from A to F. Originally, fractions B, D, and F (fifty percent of the total) were in Romero Zenizo’s name. The A, C, and F were in the name of César Escobosa, Genaro Escobosa, and Eduardo Medellín.

On December 11, 1973, the Fifth Civil Court granted summary judgment of the dissolution of co-ownership, and Romero Zenizo owned the entire 265 hectares.

According to the plans of the Sedatu, how the 745 hectares declared as national land would be distributed: 128 for the airport and 617 to be distributed among 722 communal farmers of San Miguel Xaltocan, the 128 hectares – divided into two fractions, one of 50 and the other of 78 hectares – are within those 265 hectares that would be owned by Romero Zenizo and Inmobiliaria Zumpango, if a district judge ruled.

Deed 510 of April 23, 1976, attests that Inmobiliaria Zumpango bought fractions A, of 85 hectares, and F, of six hectares, which until then had been the property of Romero Zenizo.

Today, when the courts formally restart their activities, after the inactivity due to the health crisis of covid-19, the outcome of the amparo proceedings filed in the fifth district court in Mexico City by Romero Zenizo and in the tenth district court of the second circuit in the State of Mexico by Inmobiliaria Zumpango is soon to be seen. But that by order of the Judiciary Council passed to the Fifth District Court in Administrative Matters.

The judge in both cases will have to define if the 128 hectares are national land, as declared by the Secretariat of Agrarian, Territorial and Urban Development (Sedatu) on April 26, 2019, or is private property as Romero Zenizo and Inmobiliaria Zumpango are trying to prove through their own protections.

If the judge decides that the land is the nation’s property, construction work on the new air terminal would continue and could be completed promptly. It was established that in 2022 the terminal would be ready.

If private ownership of the land is recognized, the judge will rescind Sedatu’s April 2019 declaration of national land. Sedena would have to expropriate these private properties and agree with the owners on the amount paid for the 128 hectares. In this way, work at the airport could continue.

The 1’280,000 square meters of land in dispute has a commercial cost in the current real estate market of approximately 384 million pesos, at a rate of 300 pesos per square meter.

The construction of the new airport has triggered a speculative market for land in the area. In the neighboring ejido of San Miguel Xaltocan, Tonantitla, the land began to be sold at 3,000 pesos per square meter.

Although independent of the formalities, an additional step in this process would be to find out what Romero Zenizo owns extension of land and what extension is owned by Inmobiliaria Zumpango. Because according to publicly known plans, either or both of the property’s claimants may have a share in the 128 hectares for the air terminal and another share in the 617 hectares that the government promised to give to 722 community members San Miguel Xaltocan, in social property. This will follow another route, according to Sedatu, which has already declared that it will not negotiate with anyone who eventually manages to prove the property.

On December 6, 2006, the Secretariat of Agrarian Reform – which disappeared in 2013 – presented a report on a request made by the community members of Xaltocan for the titling of communal property.

The document, signed by Fidel Mendoza Juárez, warns that Romero Zenizo and Inmobiliaria Zumpango had a “contradiction between the plans provided by both Raúl Romero Zenizo and the representative of Inmobiliaria Zumpango, since although they indeed indicate the same areas, with different figures… the promoters place them in different places, assuming that they do not know the location of the claims; In short, with what works in the file, it is not possible to locate the areas within the informative general plan for recognition and title of communal property”.

According to the arguments presented by Inmobiliaria Zumpango before the judge of the case, the total of its property of six hectares is part of the 50-hectare estate where the airport is being built. And of its property of 85 hectares maintains that 75% of these, that is to say, 63 hectares, would be part of the 78 of the second property required by Sedena for the air terminal.

Meanwhile, the group of community members who maintain a seedling within the 128 hectares, began planting 70 hectares of barley and will continue with the same amount of oats, as shown in photographs given to Excelsior by the inhabitants of Xaltocan. They warn with these actions that they will remain at the site of the new air terminal.