The insanities and incongruities of López Obrador

A Black Hawk helicopter and Air Force planes escorted López Obrador’s commercial flight. A legislator accuses the such escorts of not fitting in with the president’s criticisms of the wastefulness of his past counterparts.

MEXICO CITY (INFOBAE) – President Andres Manuel Lopez Obrador, who rejects the use of the presidential plane and flies commercially, is escorted on his flight by a Black Hawk helicopter and two 737 jets, said U.S. Congressman Ricardo Villarreal Garcia, president of the Federalism and Municipal Development Commission,

The legislator said it was “an insult” that the president was being watched from the air with military aircraft through his Twitter account.

Villarreal reported the activity this Friday, Aug. 28, when on his commercial flight from Reynosa to Mexico City, he met the federal president. When he looked out the window, he discovered the official aircraft that were escorting them.

“I just found @lopezobrador_ traveling on my flight from Reynosa to CDMX, according to them there are no expenses before it was an insult the plane of @EPN now it is an insult that they take care of us on a commercial flight two 747s and a black hawk, it was more expensive for us,” he said through his social networks.

The images accompany the legislator’s publication, a helicopter, and an airplane of the Mexican Air Force.

According to user Julio Cordero, there were more aircraft, as he responded to the congressman than: “There are two 737 planes. I was at the Reynosa airport a while ago, and in addition to the Blackhawk you mention, there were two King Airs, and a G5. In total, six aircraft. If the objective is not to spend money, then he shoult use those military planes to travel”. 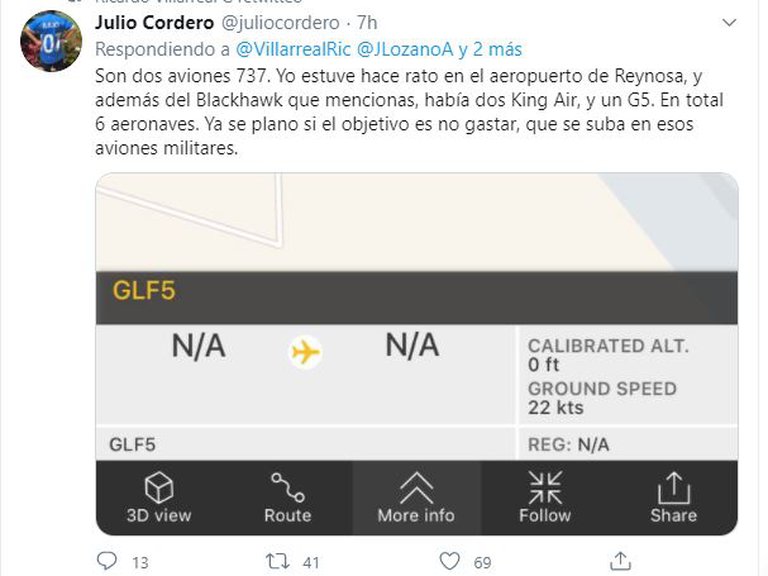 Adriana Davila, federal deputy of the LXIV Legislature, also responded, expressing her anger at such action by Lopez Obrador, who has continually criticized the excessive spending of other officials and has proclaimed himself be someone different.

A Twitter user corrected the congressman by pointing out that there were more aircraft and that they were 737s
“We are facing the most inefficient, incongruous, and fallacious government in history. They steal, lie, and justify it in the name of the people. Poor people, so far from justice and so close to Andrés,” said the legislator.

According to the Mexico Aerospace site, the Black Hawk helicopters have state-of-the-art technology, with modern communication and navigation equipment, including Automatic Flight Management and Control Systems, combined with the infrared vision capability of the FLIR camera, allows for night operations. 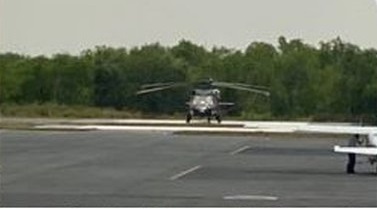 It has a load capacity of three tons inside the transport cabin or four tons outside, in addition to a rescue winch that allows it to perform a wide variety of reconnaissance, search and rescue operations to safeguard human life at sea, which allows it to assist the civilian population in cases and areas of disaster, also can provide air support close to the forces that are engaged in high-impact land operations such as organized crime, night operations or low visibility.

On the other hand, the Mexican Air Force’s 737 aircrafts are used to provide support in the Army’s different operations and to transport the civilian population in special cases.

The 737 of the Mexican Air Force, helps in the transfer of troops in military air operations, air transport of personnel to the different territorial commands, as in response to the Plan DN-III-E assisting the civilian population in case of disaster.