“The curve is in frank descent” – Ssa. Yet, Mexico exceeds 560 thousand cases of covid-19 and more than 60 thousand fatalities.

Undersecretary Hugo López-Gatell attributed the number of deaths to the health profile of Mexicans.

MEXICO CITY (Times Media Mexico) – The director-general of Health Promotion, Ricardo Cortes Alcalá, explained that deaths and infections from covid-19 are on a “downward curve.”

There are 41,563 active cases, and estimates for the next two weeks are that the number of infected people will exceed 595,000. 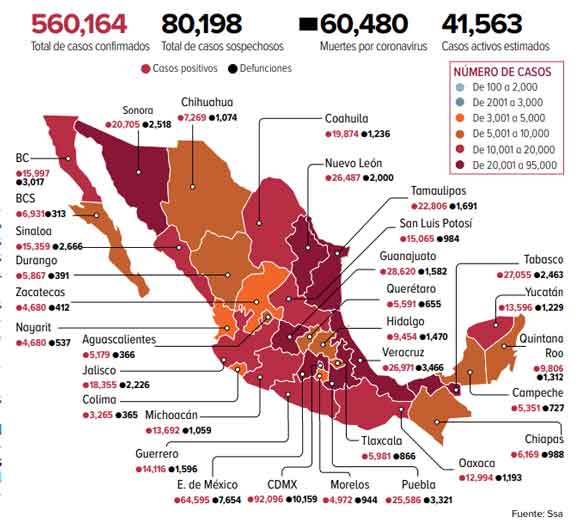 After the “catastrophic” number of 60,000 deaths was exceeded, Deputy Health Minister Hugo Lopez-Gatell reiterated that the factors in reaching this situation are the health profile of Mexicans, in which diseases such as obesity, hypertension, diabetes, and smoking prevail.

At the time this pandemic occurred, the various countries had to respond with the resources they had, and in those resources, health profiles must be considered.

This enormous presence of chronic diseases associated with inadequate nutrition, the predominance of industrialized products of low or no nutritional value and very high caloric value, is somber,” he said.

In this regard, Dr. Gady Zabicky, head of the National Commission against Addictions (Conadic), explained that people with tobacco addiction can become contagious and may also be more vulnerable to possible COVID-19 infection.

He said that the risk for smokers increases by 1.4 times, and once they are infected with chronic bronchitis from smoking, they can end up sneezing or coughing, 200 million virus particles.