Mexico’s inept Government and the 50,000 COVID-19 deaths – One person every four minutes.

From March 18 to date, the federal government predicted several times that deaths and infections would go down. This has not been the case. In less than five months, it took the coronavirus to kill several Mexicans similar to those who were victims of intentional homicide during 2019 and so far in 2020, the most violent years in the country’s recent history.

MEXICO CITY (Times Media Mexico/Excelsior) – The SARS-CoV-2 virus is hitting Mexico worse than the violence. In less than five months, the pandemic has caused the deaths of 50,517 people in the country. Adding up the victims of intentional homicide of 2019 and up to June of this year, there are 52,151 murders. Since the first death, on March 18, the impact of SARS-CoV-2 is summarized in 358 deaths per day, on average, 15 per hour or one every four minutes.

Furthermore, covid-19 is expected to be the fourth cause of death in Mexico. According to the most recent data from Inegi, corresponding to 2018, only heart disease, diabetes, and malignant tumors kill more people per year.
When comparing the number of deaths from coronavirus with the number of victims of intentional homicide that each state registered from 2019 to June, 18 entities, more than half the country, have more deaths linked to the pandemic than to violence.

In less than five months, the coronavirus has killed many Mexicans similar to the number of people killed nationally in the past year and a half.
Adding the victims of intentional homicide registered in 2019, the most violent year in the history of Mexico, with those going to June 2020, the result is 52,151 murders, a figure comparable to the 50,517 deaths per covid-19 reached yesterday. 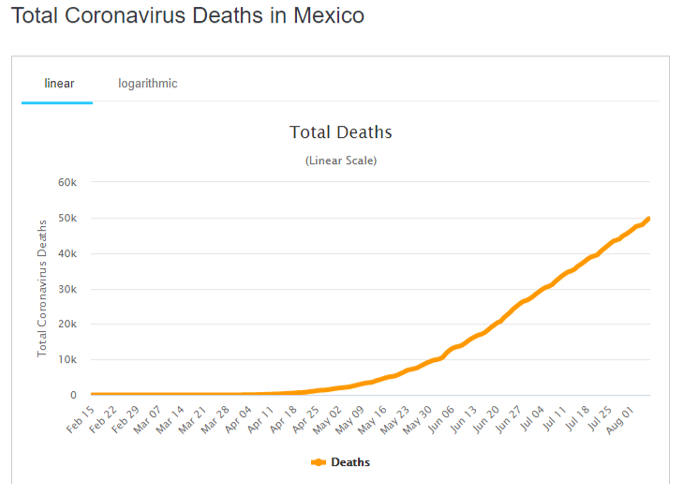 Since the first death recorded on March 18, the pandemic’s deadly impact can be summarized in 358 deaths per day, on average, 15 per hour or one every four minutes. Besides, covid-19 is now the fourth leading cause of death in Mexico. According to data from Inegi, only heart disease (149,368 deaths), diabetes mellitus (101,257), and malignant tumors (85,754) have killed more people in one year.

According to data from the Ministry of Health, 124,000 people who have been hospitalized for coronaviruses have died, 44,821, or 36.14 percent.
Of 11,928 who were intubated, 8,642 died, representing 72.45 percent, and of the 9,935 patients admitted to intensive care, half died, or 4,997 in total.
When comparing the number of victims of intentional homicide that each state registered from 2019 to last June with those killed by the coronavirus, 18 states – more than half of the country – have more deaths linked to the pandemic than to violence.

These are the State of Mexico, Veracruz, Mexico City, Sonora, Puebla, Sinaloa, Tabasco, Chiapas, Hidalgo, Coahuila, Queretaro, Nayarit, Durango, Tlaxcala, Aguascalientes, Campeche, Baja California Sur and Yucatan.
According to the latest technical report from the Secretariat of Health, the five entities with the highest number of accumulated cases distributed by the state of residence are Mexico City, State of Mexico, Tabasco, Veracruz, and Guanajuato, which together form 43.9% of all cases registered in the country. 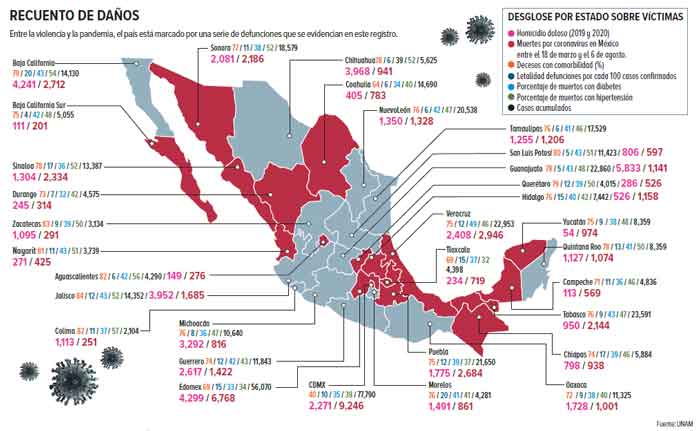 CDMX continues to register most of the cumulative cases in the country and represents, on its own, 16.8% of all cases registered by the state of residence.

More than 50 thousand deaths
On day 68 of the “new normality” discussed by López Obrador and his “expert” López Gatell in Mexico, the number of deaths rose to 50,517, due to the emergence of 819 deaths in one day. There were 462,690 accumulated infections with the report of 6,590 new cases, 46,861 are the estimated active cases, and there are 87,973 suspected cases.

According to López Gatell, there are four entities that currently present epidemic stability: Mexico City, Morelos, Coahuila, and Durango.  The Undersecretary of Prevention and Health Promotion explained: “What we highlight is the trajectory that these states have, which have still had ascent but are beginning to have plateaued, are beginning to have periods of stability.

“Yesterday we presented the states that have continued to rise, today we are showing states that have plateaus that have stability, and in the last block we will offer those that already have a clear and sustained decline,” which neither Lopez Gatell nor anyone on his team actually, did show.