Jellyfish wash up on beaches of Yucatán

In humans, the venom of the “Portuguese  frigate” has neurotoxic, cytotoxic, and cardiotoxic consequences, producing very intense pain, and there have even been cases of death.

PROGRESO Yucatan (Times Media Mexico) – The arrival of jellyfish in this port and some other areas of the Yucatan coast have caused an alert among fishermen and the population. These marine organisms can cause burns, scrapes, and constant and severe scratching and itching and even cause death among those allergic to their venom.

The alert regarding the jellyfish is also because, at this time, Yucatan is going through the most delicate moments of the coronavirus pandemic, so going to a hospital for a minor matter as it would be the infection that causes these organisms of the sea, would be quite complicated. 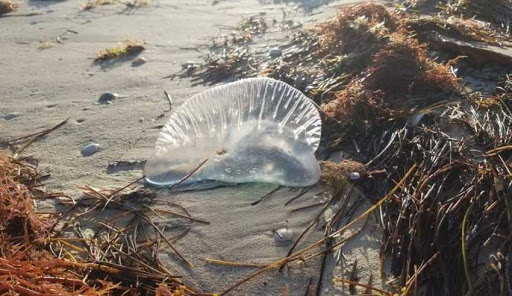 The arrival of jellyfish is a natural phenomenon that occurs every year, but this time it is less than that recorded in 2019.

The jellyfish, of the species “fragata portuguesa” in Spanish -Portuguese  frigate- (Physalia physalis), can measure up to 10 meters, and when in contact with the skin, they cause burns, scratches, and intense itching.

This jellyfish is made up of colonies of marine organisms that live in its sail-shaped gelatinous pouch, which measures 15 to 30 centimeters.

The Portuguese Caravel is a carnivore. With poisonous tentacles, it traps and paralyzes its prey. It usually catches small aquatic organisms like fish and plankton.

Predators include loggerhead and hawksbill turtles, as their skin is too thick for the venom from the sting to affect them. The sea slug, Glaucus atlanticus, feeds on the Portuguese Caravel, as does the violet snail, Janthina janthina.

In the lower part, it has thin filaments measuring up to 10 meters with urticaria cells that, when in contact with the skin, produce a type of burn and use them to capture prey and defend themselves.

“People know them as ‘agua mala’ -bad water-, and you can see them floating like ‘sailboats’ on the beach in Yucatan, they are colonies of polyps, and they are urticant, which mean it burns… burns a lot,” said Fernando Reyes, a marine biologist at the Autonomous University of Yucatan.

The Fishing Society of Puerto Progreso in the northern Yucatan, where there is a large population of this species, informed the residents of a series of measures to avoid their contact, among which are not to take them out of the sea, not to hunt them, and to prevent children from approaching them.

Even though it is the summer season, there is a considerable decline in the number of people along the Yucatan coast, due to the health contingency, the state authorities are extracting these jellyfish.