‘nobody likes me’ – Trump

Donald Trump said on Tuesday that his relationship with Dr. Anthony Fauci is “very good,” but he wonders why the doctor’s approval rating is so high, and his so low.

UNITED STATES (Agencies) – In a statement a day after reiterating a message claiming Fauci had misled the public, Trump attributed his own low ratings to his personality.

Trump claims Fauci’s widespread respect should be transferred to the Trump administration, for whom Fauci works. “I get along very well with him and agree with a lot of what he said,” Trump insisted.

“It’s interesting: he has a very good approval rating. And I like that, it’s good,” he continued. “But remember, he’s working for this administration. He’s working with us. We could have gotten other people. We could have gotten someone else. It didn’t have to be Dr. Fauci. He’s working with our administration. And for the most part, we’ve done what he and others, and Dr. Birx and others, have recommended.” (Ad verbum)

In a series of tweets on Monday night, Trump refuted false claims, including one suggesting that hydroxychloroquine was a cure for the coronavirus and a tweet called Fauci a “fraud. Twitter took action Tuesday and removed several tweets that were also retweeted by Donald Trump Jr., his son, and restricted Trump Jr.’s account. 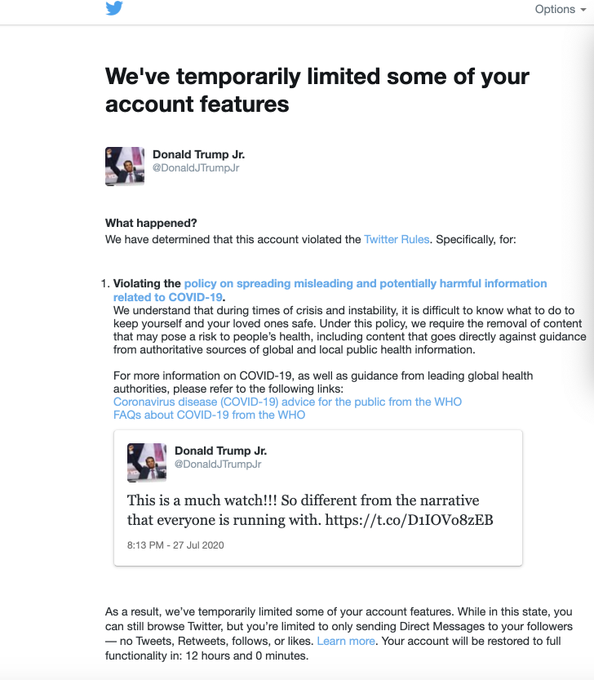 Although Trump has maintained that he has a good relationship with Fauci, he has often tried to minimize the doctor’s warnings against reopening the country too quickly. The president called Fauci “a bit alarmist,” and the White House has promoted Fauci’s comments at the beginning of the pandemic to discredit him.