Mexican intellectuals propose the creation of a block that would serve as a counterweight to AMLO’s actions.

In a public letter entitled “Against the authoritarian drift and for the defense of democracy” Mexican intellectuals pointed out that the COVID-19 pandemic has been used by López Obrador “to accelerate the demolition of the State” and therefore proposed the creation of a structure that would serve as a counterweight to the actions of the Executive.

The letter, signed by historians, specialists in the field of health, writers, literary critics, states that 20 months after the beginning of the López Obrador government, there is a climate of “asphyxiation of the pluralism of representation to submit the Legislative Power to the dictates of the Executive.

They assured that President López Obrador has been concentrating the government’s power in his hands to the detriment of the other authorities of the State and the entities of the Federation. 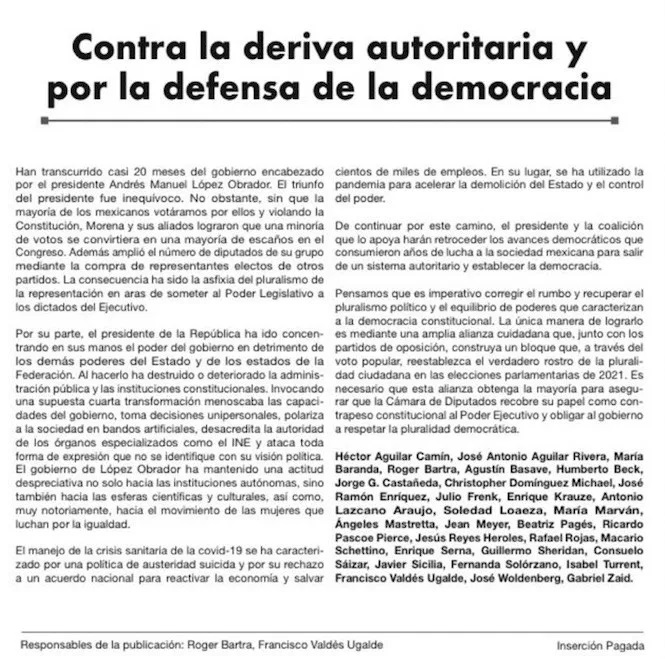 “In doing so, he has destroyed or deteriorated the public administration and the constitutional institutions. Invoking a supposed fourth transformation, AMLO undermines the government’s capacities. Makes single-person decisions, polarizes society into artificial camps, discredits the authority of specialized bodies such as the INE, and attacks all forms of expression that do not identify with his political vision,” the letter states.

They described the handling of the COVID-19 pandemic as “suicidal” and that the epidemic was used to accelerate the State’s demolition.

“If we continue on this path, the president and the coalition that supports him will reverse the democratic advances that consumed years of struggle by Mexican society to emerge from an authoritarian system and establish democracy.

They assured that it is imperative to correct the course and recover political pluralism and the balance of powers, which is why they proposed the creation of an alliance between opposition parties and the citizenry to form a block that will restore citizen plurality for the 2021 elections.

“This alliance must obtain a majority to ensure that the Chamber of Deputies recovers its role as a constitutional counterweight to the executive branch and forces the government to respect democratic plurality,” the intellectuals said.