Between 2013 and 2016, Sedena made purchases from a company that simulated its operations because it had no employees or infrastructure.

MEXICO CITY (El País) – The Mexican Army allegedly diverted 240.5 million pesos (approximately 14.8 million USD) to a ghost company acting in collusion with other companies to make the goods it offered to the military unit more expensive, according to a publication by newspaper El País.

Between 2013 and 2016, during the six-year term of Enrique Peña Nieto, the Ministry of National Defense (Sedena) made purchases from DRM Aceros Internacional for alleged inputs for the production of weapons, ammunition, explosives and military equipment. However, the tax authority determined in October 2018 that this was a phantom company that simulated its operations because it did not have employees or infrastructure to market the goods.

The Ministry’s authority that granted the contracts was the General Directorate of Military Industry, a professional body in charge of producing, assembling, and maintaining the war material and military vehicles used by the Army for its operation. Most of the contracts were awarded directly and by invitation to at least three people, without an open call for tenders. The National Defence is the only federal agency that has signed contracts with this company since it was established, as there are no records of purchases made by other federal government agencies. 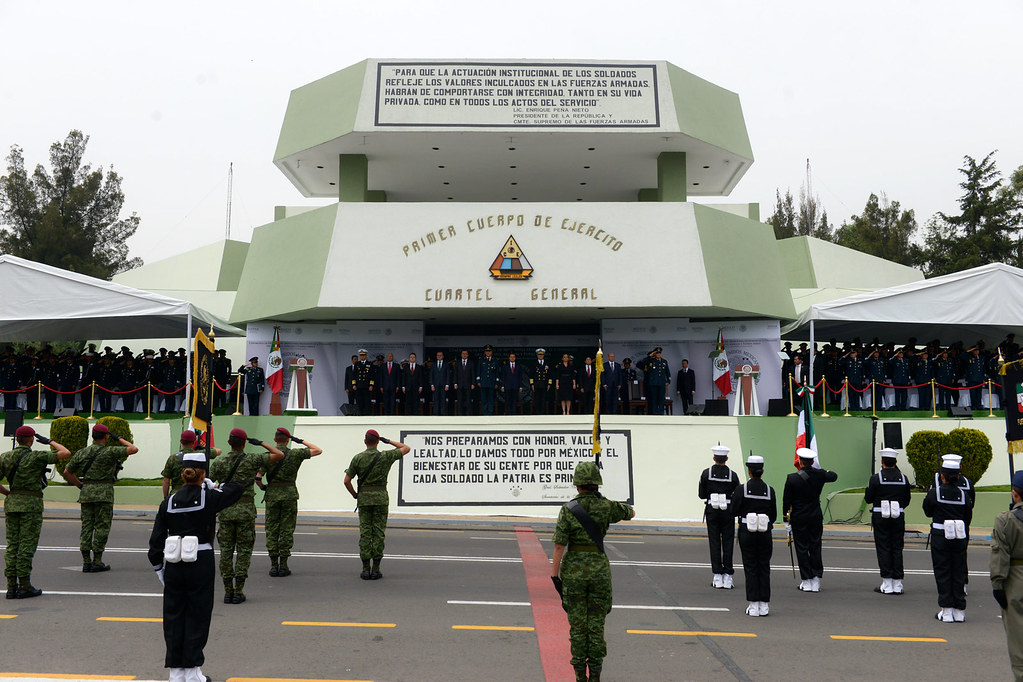 The Mexican Army is one of the most powerful institutions in Mexico. During the governments of Felipe Calderón and Enrique Peña Nieto, it played a leading role in the so-called war on drugs. With the arrival of López Obrador, little or nothing has changed. Although during the campaign, the current president raised the option of returning the Army to the barracks, once he took office, his discourse changed radically, and he has taken it upon himself to empower them even more. He legalized the military’s participation in security tasks. Still, he has entrusted them with leading various responsibilities: from combat to the sale of illegal fuel (huachicol) to the construction of one of his most important projects: the new Felipe Ángeles International Airport.

López Obrador has maintained that the SEDENA is one of the least corrupt institutions, even though the Superior Audit Office of the Federation – the controlling body in Mexico – has documented the irregularities of the military in the public works that have been under its execution. In the canceled Texcoco airport, the emblematic work of former president Peña Nieto, the ASF pointed out deficiencies in the planning and elaboration of the executive project presented by National Defense for the construction of one of the airport runways. The auditors also pointed out that the military paid for work that was not done and that there were surcharges for various services contracted in the construction of the building’s perimeter fence.

These anomalies in the management of public resources by the Army were not the only ones. This investigation by EL PAÍS reveals that in the previous six years, Sedena hired DRM Aceros Internacional to supply various inputs, even though it had no business experience and was simply a paper company. The company was incorporated on September 19, 2013, before a notary in Tlalnepantla, State of Mexico, and two months later, signed its first contract.

From 2013 to 2016 the company sold to the unit various materials for the manufacture of cannons, grenade launchers, as well as parts that are used in the production processes to manufacture the components of the rifles, cartridges and hand grenades, reads in the contracts consulted in Compranet, the conventional system of government purchases. This newspaper asked Sedena to know if the commanders involved in the deals were sanctioned, but Sedena asked to request this information from the Public Administration, which finally did not provide any information. 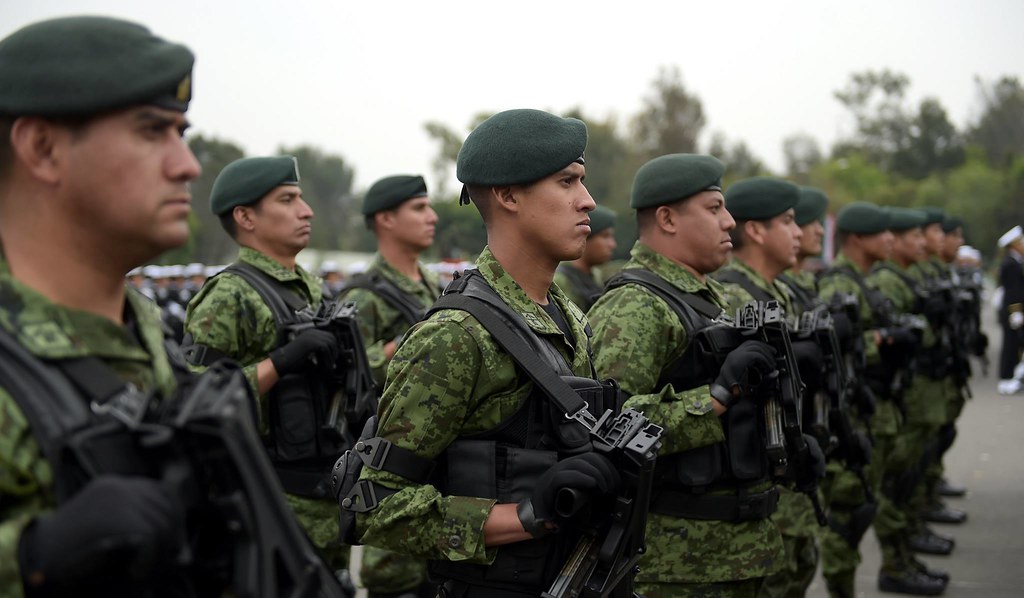 DRM Aceros simulated its activities and colluded with other companies to sell the inputs it offered to Sedena at a higher price. It concluded the Superior Audit after reviewing three contracting procedures carried out in 2015. In the acquisition rounds to buy 30 thousand pieces of steel bars in January 2015, the company agreed with two participating companies, which only presented their proposals to favor it. The ASF detected that one of the winning company shareholders had been the commissioner of the other competing company.

Not only that, the steel was sold to the Directorate of Military Industry with a surcharge of 143.9% since the material cost 8.3 million pesos (522,637 dollars at the exchange rate at that time), but DRM Steel sold it for 26.7 million pesos (1.6 million dollars). Also, the supervisory body noted that it was likely to be in breach of its tax obligations because, with the Treasury’s data, it was found that the firm made imports of steel, but in its annual statement of 2015, never reported these purchases.

In another allocation round, also in 2015, the audit found that DRM Aceros (the winner of the contract) submitted a certificate stating that a Spanish steel company had produced the goods offered. However, after reviewing the invoices that cover the purchase, the auditors found that the steel was purchased in Mexico with a national company, which in turn had purchased it from an Italian company. “With this, it is considered that the certificate presented by the awarded company is not reliable,” concluded the auditing body. This triangulation, where DRM Aceros acted as an intermediary, caused the goods to be sold with an increase of 2.3 million pesos (144,827 dollars).

In the same contracting procedure, again, collusion was detected among the participants. According to the Audit, three of the companies were related to DRM Aceros, since in the notarial movements, it was found that they shared shareholders, commissioners, and legal representatives. In another contract in September 2015, the winning company backed up its proposal with a certificate accrediting it as an authorized distributor of the inputs. Still, it omitted to say that this had been issued by another of the companies participating in the procedure.

The purchases that Sedena made from this company by restricted invitation were justified by the fact that this guaranteed the participation of specialists in the field and that it was not appropriate to hold a public tender because there were few companies with the necessary inputs and immediate response capacity. This argument is one of the most used by the Army to avoid the hiring contests, says Marco Fernández, coordinator of the anti-corruption area of the organization México Evalúa. “There is an abuse of the exceptions by which they can assign directly. They are 38 justifications to the law,” he says.

Another problem is that many of the contracts are not public and are classified as reserved under the argument of national security. The data collected by the school of government at the Tec de Monterrey and Mexico Evalua show the abuse that the National Defense has made of a direct assignment. While in 2013, at the beginning of Peña Nieto’s six-year term, they barely allocated 270 million pesos (US$21.1 million at the exchange rate at the time), in 2018, the last year of that government, the figure reached 3.27 billion pesos (US$170 million).

Now with Lopez Obrador, Sedena delivered contracts for 5 billion pesos (259.6 million dollars) in 2019 without launching a recruitment call, details Fernandez. These allocations, which lack transparency, may give room for random acts in contracting. “Headquarters must be held accountable, and there must be scrutiny to avoid corruption. It is not worth saying that because they are the Army there is an intangible honor that makes their contracts surrounded by an aura that protects them (from anomalies),” he mentions.

Weak sanctions
These contracts with DRM Aceros were made during the administration, first, General Gerardo Rubén Serrano Herrera, as head of the Military Industry Department, who was in charge from the beginning of 2012 to January 2015. After a series of reshuffles, Serrano Herrera was left as head of the first military region, including the country’s capital, the State of Mexico, Hidalgo, and Morelos. In December 2016, he was sent to command the 11th military region, which covers the northern states of Coahuila and Chihuahua. He is currently retired from the armed forces.

In January 2015, General Genaro Fausto Lozano Espinosa took over the Directorate of Military Industry and remained in the post until December 2016, when he retired. In a ceremony held on December 1, 2016, at the Heroic Military College, former Secretary of National Defense Salvador Cienfuegos presented Lozano Espinosa with a decoration in recognition of his nearly 50 years of service the Armed Forces. In his speech, he highlighted that the general was always a visionary man, with leadership and gift for command, which efficiently performed as commander of several military regions. “As general director of the Military Industry, he promoted important and unprecedented projects to satisfy the Army and the Air Force’s various needs,” said Cienfuegos.

After Lozano Espinosa’s retirement, Sedena appointed a new director for the Military Industry area. Three weeks after the event headed by Cienfuegos, the Superior Audit Office issued a report pointing out the anomalies in the purchases made by the General Direction of Military Industry during 2015, during the period of the recently decorated general. In its observations, the auditing body warned about deficiencies in the selection of suppliers and concluded that there was a lack of control mechanisms in the management of resources and that the collusion of DRM Steel with three other companies resulted in higher prices being offered.

The last contracts with DRM Aceros were signed in 2016, and the previous payment that the military unit made to the company was in January 2017 for a settlement, i.e., compensation for having terminated the contractual relationship earlier than stipulated. In October of that year, the Tax Administration Service (SAT), the tax authority that verifies the legality of these companies’ operations, suspected that DRM Aceros Internacional was issuing tax receipts without having the assets personnel or infrastructure to produce or market the inputs.

On October 8, 2018, the SAT finally concluded its investigation and showed the company its list of phantom companies classified as “definitive” after it was unable to reverse the accusations.
The Army Comptroller’s Office decided to disqualify the steel company and fine it 98,140 pesos (around US$5,000) until October 2019, almost three years after the Audit Office notified it anomalies it had incurred. The sanction was because it was found that it had submitted false information, sold inputs at a premium, and acted as an intermediary of the goods it sold to the National Defense.

In a memo published in the Official Gazette, federal agencies and states were asked to “abstain” from hiring the company for three months. Although the disqualification ended last February, the company continues to be prevented from entering into public contracts because it has not paid the fine.

In the contracts signed with Sedena, the company reported several addresses. In 2014, the owner of the company, Oliver de Leon Barredo, said its offices were in “February 5 street number 6, colony Ahuehuetes,” in the town of Atizapan de Zaragoza, in the State of Mexico. However, this address does not exist. There is no 5 de Febrero street in the settlement. In another contracting procedure, the company provided the address of 20 Las Granjas Avenue, in Las Colonias colony and Atizapán. There is a two-story house in the settlement that does not have signs referring to any company. The addresses of the supposed owners could not be located either since the streets and colonies are imprecise.