AMLO in the United States

Washington, D.C. (Agencies) – After the stopover in Atlanta, Andrés Manuel López Obrador arrived last night at the Washington-Dulles airport in the United States to meet today Wednesday, July 8, his counterpart Donald Trump at the White House.

The president of Mexico was received by Christopher Landau, U.S. ambassador to Mexico, and Martha Barcena, Mexico’s ambassador to the United States.

Upon the arrival of the president, the U.S. ambassador shared a photograph on Twitter with his Mexican counterpart at the airport complex and wrote: “Everyone is very excited to welcome you on your first trip abroad.”

The Federal Executive is accompanied by the Chancellor Marcelo Ebrard; Graciela Márquez, Secretary of Economy and by Daniel Asaf, head of assistants.

On his first day of activities López Obrador took flower offerings to the monument to Abraham Lincoln and Benito Juárez, and later move to the White House where he will meet with President Donald Trump and discuss the entry into force of the treaty between Mexico, the United States, and Canada. 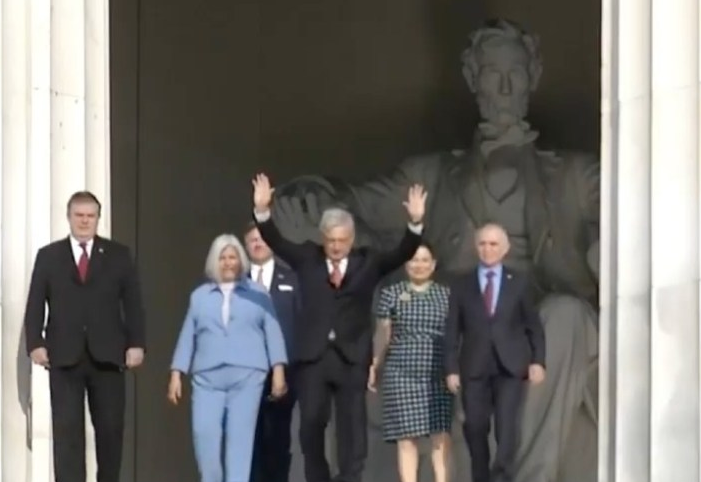 In the evening, President Donald Trump will offer a dinner in honor of President López Obrador at the White House, where 11 Mexican businessmen are invited.

“The working dinner, like the rest of the presidential visit, is intended to celebrate the entry into force of the USMCA and to explore the new possibilities offered by the agreement to increase investment, employment and the welfare of the population in both nations,” said Mexico’s Secretariat of Foreign Relations.

The Mexican president is expected to return to the national territory at midday on Thursday.