The demand, which was presented in a cease and desist letter to CNN President Jeff Zucker and contained numerous incorrect and misleading statements, was immediately rejected by the network. “We stand by our poll,” CNN spokesman Matt Dornic said.

The CNN poll, conducted by SSRS and released Monday, shows that Trump is trailing the former vice president by 14 points, 55% to 41%, among registered voters. The poll also found that the president’s approval rating is at 38% – his worst since January 2019 and roughly on par with the approval ratings of Presidents Jimmy Carter and George Bush, who had only one term, at this point in their years of re-election – while his disapproval rating is at 57%.

In the letter sent to Zucker, the Trump campaign argues that the CNN poll is “designed to mislead American voters through a biased questionnaire and biased sampling. It is a ruse and a false poll to provoke voter suppression, suppress strength and enthusiasm for the president and present an overall false picture of current U.S. support for the president,” states the letter, signed by Trump’s chief legal advisor Jenna Ellis and chief operating officer Michael Glassner.

Trump’s Campaign Demands Apology from CNN
The campaign formally demanded that CNN retract the poll and issue a “full, fair and visible retraction, apology and clarification to correct its misleading conclusions”. David Vigilante, executive vice president and general counsel for CNN, told the campaign that its “allegations and demands are rejected in their entirety”.

“As I understand it, this is the first time in its 40-year history that CNN has been threatened with legal action because an American politician or campaign does not like CNN’s poll results,” Vigilante wrote in his response. “To the extent that we have received legal threats from political leaders in the past, they usually come from countries like Venezuela or other regimes where there is little or no respect for free and independent media”.

After CNN released the poll earlier this week, Trump tweeted that he had hired Republican pollster McLaughlin & Associates to “analyze” the survey and others “that I felt were FALSE because of the incredible enthusiasm we’re getting”. McLaughlin ranks as one of the least accurate pollsters in the industry, as measured by FiveThirtyEight. 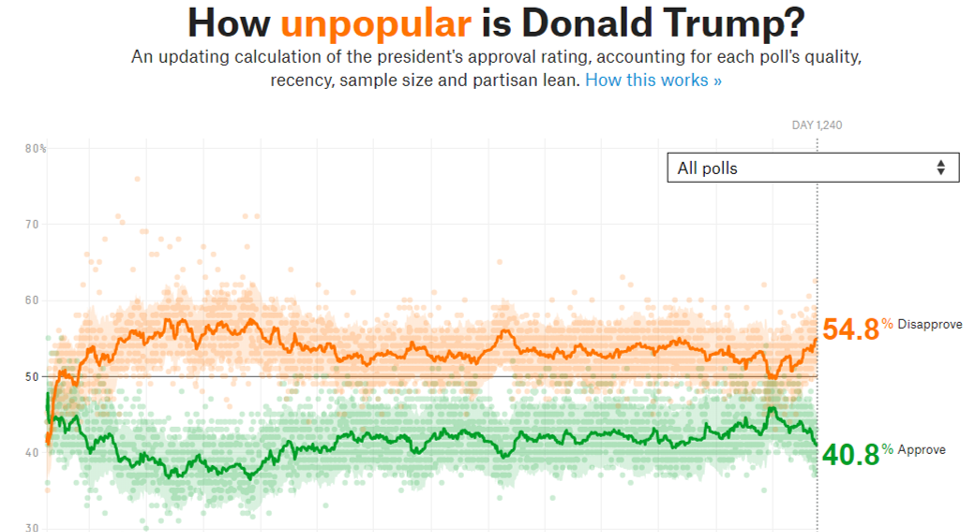 But multiple other surveys released in recent weeks – including those by ABC News/Washington Post, Monmouth University, NPR/PBS Newshour/Marist College, NBC News/Wall Street Journal, Quinnipiac University, and Fox News – also show Biden well ahead of Trump. These polls averaged with the CNN survey found Biden leading by two digits, a result well above any margin of error.

Misleading Claims
The campaign letter, which mainly cites McLaughlin’s findings, makes several incorrect and misleading claims. “This is a poll of 1,259 adults, not even registered voters, much less likely voters,” the letter and a memo from McLaughlin earlier this week.

McLaughlin points out that the CNN poll is an “anti-Trump biased poll of only 25% Republicans”. However, that percentage of respondents is consistent with several other significant surveys that use live telephone interviews, which provide the most reliable picture of the race.

McLaughlin argued this week that pollsters should include one-third Republicans in the polls to reflect the 33 percent they represented in the 2016 vote, but exit polls almost always have a higher proportion of supporters and a lower proportion of independents than pre-election phone surveys.

Among the entire sample, 32 percent identified themselves in the CNN poll as a Democrat, 25 percent as a Republican, and 44 percent described themselves as independent or belonging to another party. The results for the entire sample have a sampling error of plus or minus 3.4 percentage points. This is 3.6 points among registered voters.

The letter sent to Zucker also includes McLaughlin’s criticism that the poll, conducted June 2-5, was done “before the big economic news,” an improvement in the unemployment rate that was released Friday, even though the poll continued throughout the day.

And the poll comes during an especially turbulent time for the Trump presidency, including the current coronavirus pandemic, the outrage and concern over race relations in the wake of George Floyd’s death at the hands of police officers, and the official entry of the United States into a recession.

McLaughlin has also argued that the poll unfairly includes “questions on issues including race relations, non-job creation, which could have further skewed the poll,” although the CNN poll does ask registered voters who would best handle the economy (Trump leads with 51% vs. Biden with 46%) and was conducted at the height of the protests over Floyd’s case.

Trump has often been irritated by polls that do not reflect him favorably while promoting those that do. Last month, Trump criticized Fox News, a network that frequently advertises and gives interviews to a telephone poll that showed him behind Biden by 8 points, and instead pointed to a CNN poll released earlier this month outperformed the former vice president in battleground states. But that CNN poll showed Biden had a 5-point lead over Trump among registered voters nationwide.

“Why doesn’t @FoxNews release the CNBC poll or the @CNN poll (believe it or not!)? I hope Roger A is looking down and seeing what happened to this once beautiful creation,” tweeted Trump at the time, referring to the late Fox News founder Roger Ailes.

Trump had also credited CNN polls when it suits him, as he did in December 2015 when he thanked several reporters on the air for their “very professional report on CNN’s new poll” that showed him ahead of the curve in Iowa caucuses.