US President deflates in his campaign debut, which according to him, was a “triumphant return” after the coronavirus hiatus, as many of those registered did not turn up, and fewer supporters than expected were mobilized.

TULSA, United States. (Agencies) – Trump returns to the rallies with a sharper turn to populism and unexpected failure. Donald Trump’s campaign was expecting 19,000 people inside the Bank of Oklahoma Center in Tulsa, Oklahoma, on Saturday and 40,000 outside. It was the President’s first rally after 110 days of coronavirus, and Trump’s return to the stage was supposed to have an impact similar to a meeting of, say, “The Eagles”.  Over a million tickets had been downloaded from the Internet for the event.

The anticipation was such that, for the first time, the President’s campaign had planned not one, but two speeches by the head of state and government: one outside the BOK Arena, and the other, more importantly, inside. “It’s the biggest ticket subscription to a rally of all time. Saturday is going to be amazing,” Trump campaign manager Brad Parscale said on Twitter six days before the event. 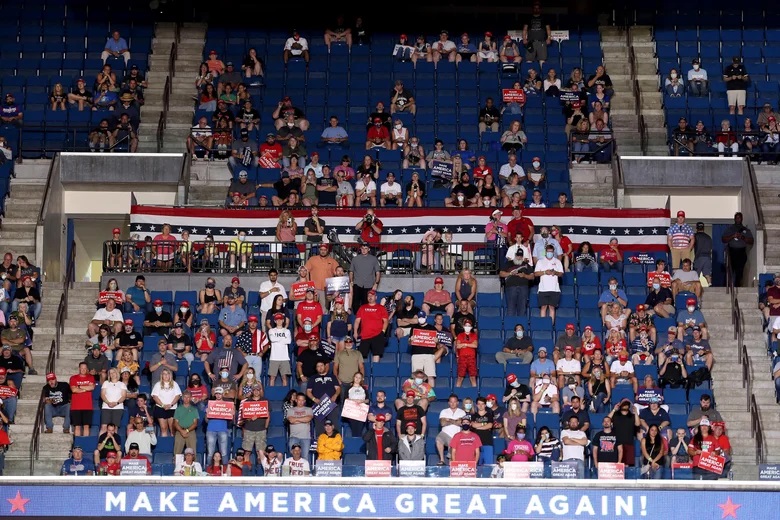 But something went wrong. None of the 40,000 expected followers outside the venue showed up. Inside, 6,200 followers, according to the Tulsa Fire Department. Not counting the organization, reporters, or donors who had been awarded a section. It was a spectacular failure for many reasons.

In all the polls of the last three weeks, after the outbreak of violence and protests unleashed by the death of African-American George Floyd at the hands of white policeman Derek Chauvin in Minneapolis, the President is already between 8 and 14 points in the polls behind the Democratic candidate, Joe Biden. Since the beginning of this month, bookies have been giving Biden the run-around for the first time.

So what happened?
The Trump campaign was quick to blame the failure on a wide range of suspects. Some of them, the usual ones: the press, which spreads “fake news”, the infamous “Antifa,” a term coined in 2017 by the Russian news channel RT to define ultra-left groups.

The new suspects on the list, revealed by Trump’s campaign, are in “Asian groups” with the capacity to dynamite the most sophisticated political marketing. It includes the “KPop” groups, which are Korean teenage pop bands, extremely popular in Asia, and are now making a strong comeback in the United States. 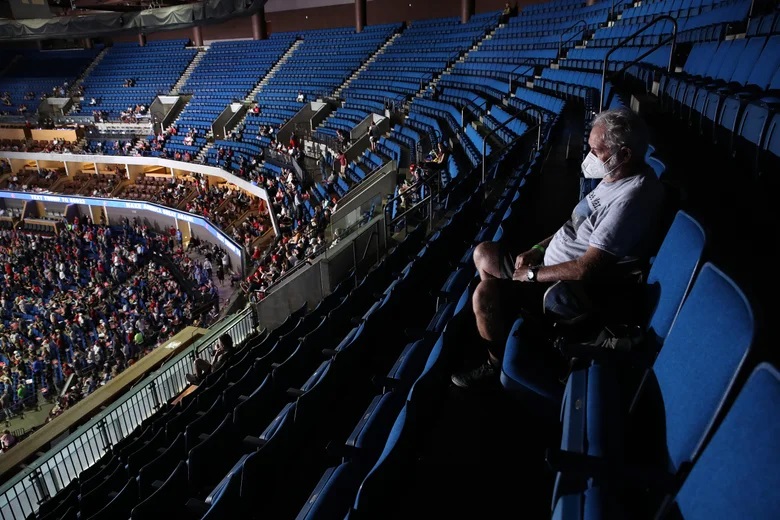 According to Trump’s supporters, the ‘fans’ of this music were called through the social network Tik-Tok to reserve a massive amount of tickets for the event. Whatever the case, the failure also highlights an unexpected vulnerability in Donald Trump’s campaign, which, in the past, had an incredible capacity for mobilization through the Internet.

In front of his audience, Trump was more theatrical than usual. And more challenging. He said that he had ordered “his people” to do fewer tests for the coronavirus to reduce the number of cases in the country. He spent ten minutes at the beginning of the rally staging his visit to West Point, and how his slow descent down a ramp at the Military Academy and his apparent trouble drinking a glass of water as a result of being in the sun for hours, and the importance of taking care of his “leather-soled shoes” and “silk ties. And he delivered attacks on his rival, Joe Biden, even though the public seemed more focused on Hillary Clinton, who contested the 2016 election. 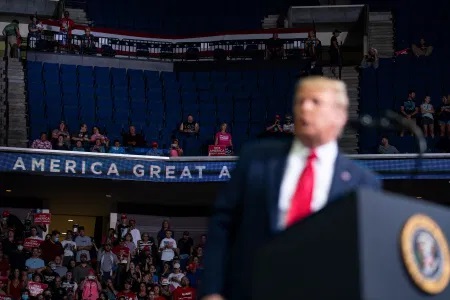 Trump did not mention “it.” The elephant in the room. He did not refer to race riots. Nor, of course, to the removal of Geoffrey Berman, the prosecutor investigating his ally, Rudy Giuliani, in New York. A dismissal that Brett Bruen, a former senior official of the Obama administration and current President of the communications consultancy Global Situation Room, is “a sign of tension and disintegration of our institutions.”

In the end, Trump’s speech was like a “The Eagles” concert reunion: a review of “greatest hits”… But with much less audience than expected.