The harsh reality of the Mexican police.

Half of the police officers in Mexico pay for their own equipment; 20% do not get target practice. On average, state agents earn 11,000 pesos a month An average of 500 USD) of which they invest a portion in boots, uniforms, or bullets. In states like Veracruz, the police officers pay from their pocket to have a bulletproof vest.

MEXICO (Animal Politico) – Police officers in Mexico survive not only the growing onslaught of crime but also their shortcomings: salaries that do not exceed 11,000 pesos (an average of 500 USD a month) and with which they also have to replace the equipment they are given incomplete; lack of basic training such as shooting practice that one in five police officers have never received; any growth, few promotions, abuse by bosses, insults, contempt.

During the worst crisis of violence on record, the shortcomings of the state police in the country are deepening. The result: there is no effectiveness in the fight against crime. Constant failures and violations of human rights are tangible and permanent. People distrust the police. At the same time, millions of pesos are spent each year on security funds that fall short and are also poorly invested. Just this 2020, 185 police elements have been killed throughout Mexico.

In the report “Qué piensa la policia?” -What do the police think?- the civil organization “Causa en Común“ documents the crisis facing the country’s security forces based on a survey of nearly five thousand elements of state corporations. These are shortcomings that have been dragging the security forces along for years, and which are not being reversed despite the changes of government.

In 2019 the National Model of Police and Civic Justice was designed and approved, which recognizes this crisis and designs a plan to turn it around, it has not received resources almost a year after its approval. Instead, the political and budgetary commitment to the militarization strategy continues.

“There is a total political disregard for the police. They are told that they don’t produce results, that they commit abuses, but they are not prepared for their jobs.” Says Luis de la Barreda, a specialist in criminal law and former president of the capital’s Human Rights Commission. 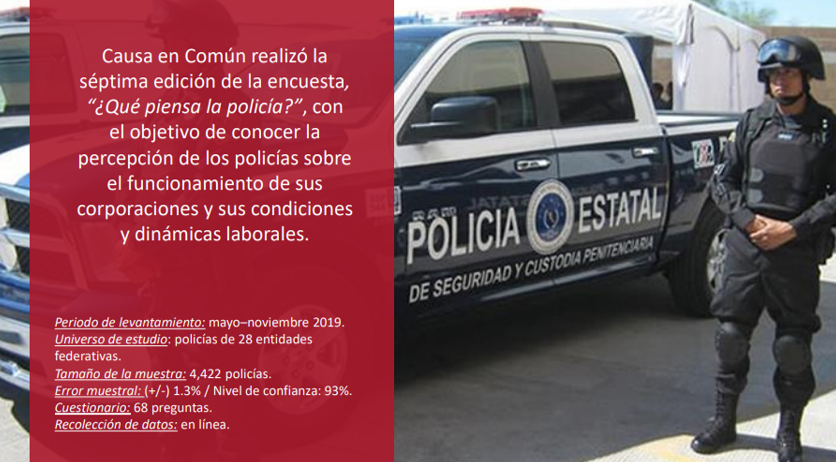 Low wages and incomplete equipment
The report from Causa en Común shows that state police in Mexico received an average salary of 11,787 pesos per month at the end of last year. But the reality is not the same for everyone: approximately four out of every ten police officers have a monthly income fewer than 10,000 pesos.

The states with the lowest salaries for their agents are Oaxaca, where they receive 7,346 pesos; Tlaxcala, where they earn 8,556 pesos; Chiapas, with 8,645 pesos; Hidalgo, where agents receive 9,343 pesos; and Campeche, with 9,418 pesos.

There are only two states in the country where state police officers receive a base salary above 15,000 pesos: Baja California, where they earn 18,201 pesos a month, and San Luis Potosi receive 15,434 pesos. 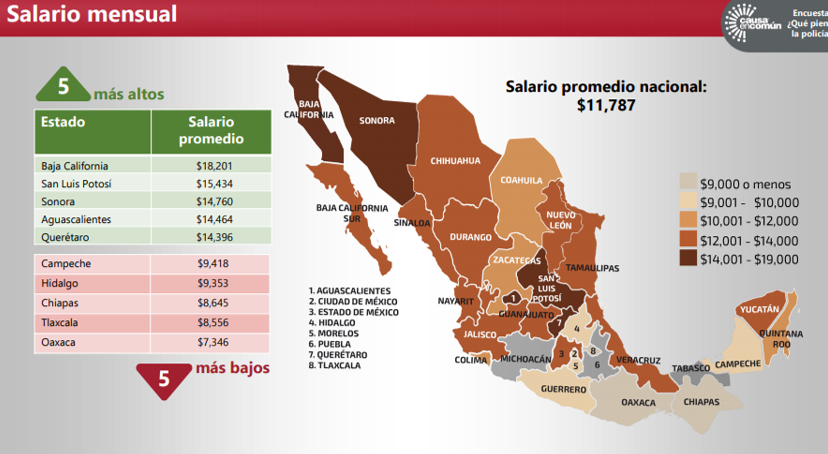 A problem that aggravates wages’ precariousness is that at least half of the uniformed must invest part of their own salary in acquiring essential equipment that should be available.

For example, the analysis reveals that nationally 51% of police officers on average must invest from their pockets to acquire their shoes and boots and in states such as Veracruz, Sonora, and Chihuahua, 8 out of 10 officers spend part of their salary on this.

Forty-four percent of state police officers buy their accessories with their money, and 42% have to invest if they want a second uniform. One in three police officers in Mexico must purchase stationery for their reports and one in four pay for repairs to their patrol car.

Police officers even have to pay for materials that are vital to their own safety. For example, 25% of police officers nationwide have put in their salary to buy cartridges for their guns. There are entities where this is much more serious, such as Zacatecas, where 69% of the state police must invest in this, in Coahuila 59%, and in Sonora 54%.

Even, at least 1 out of 10 policemen in the country said they have had to invest from their bag for a bulletproof vest, and the most severe cases are Veracruz, where half of the state police cost with their salary this element, while in Chihuahua, State of Mexico and Tamaulipas a quarter of the officers said they had put their money for this equipment.

In terms of benefits, the organization’s analysis reveals that about 10% of police officers do not have a bonus, one of the fundamental labor rights. And despite the risk, their work represents, less than a third of state agents have support for funeral expenses or primary medical insurance.

Police do not receive shooting instruction and practice
Another severe deficit that the Common Cause analysis portrays is in the training of state police in the most basic functions.

For example, 21% of those interviewed in the country acknowledged that they had never received a target practice. On average, it is 1 in 5 police officers who are on the streets today. There are three extreme cases: Zacatecas, Tamaulipas, and Campeche, where more than 50% of the police officers surveyed said they had never been to a shooting range.

Another 36% of police officers nationwide say that they have had a shooting practice, but only once in two to three years. Less than half of the officers, 43%, mentioned they only received one target practice per year. 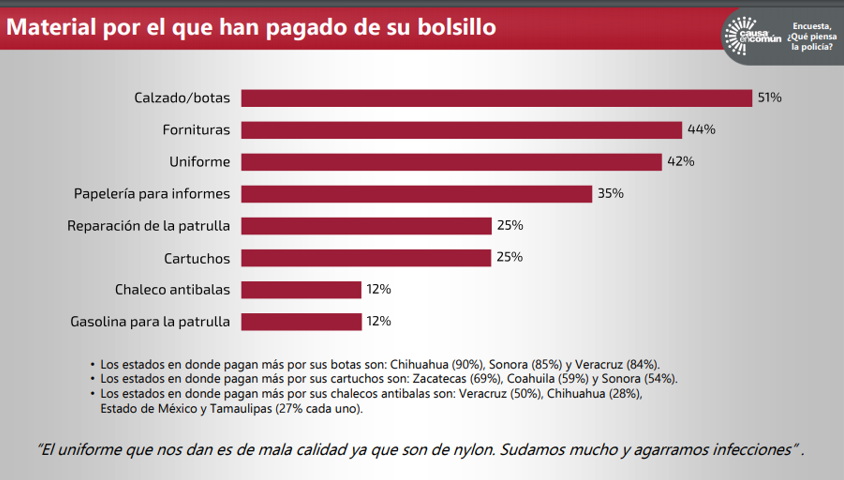 One-third of the state police lack adequate training to handle a patrol car in conditions such as a chase, while almost half of the uniformed personnel have not been trained in either receiving complaints or providing first aid.

Simulation and waste of resources
According to specialists, the poor results in combating crime and the abuses in which the police are often involved (from arbitrary arrests to extrajudicial executions) have their origin in the deficiencies in training and preparation that our security forces have suffered for years.

“The low salaries, the inhumane hours, the lack of minimum training, the fact that they don’t even know how to throw a weapon properly, or how to handle a patrol. What this makes us see is that there is a great disregard for police activity. We demand a lot of them, which is good, but it is not reasonable to think that they can do it if they are not prepared for it,” says Luis de la Barreda. 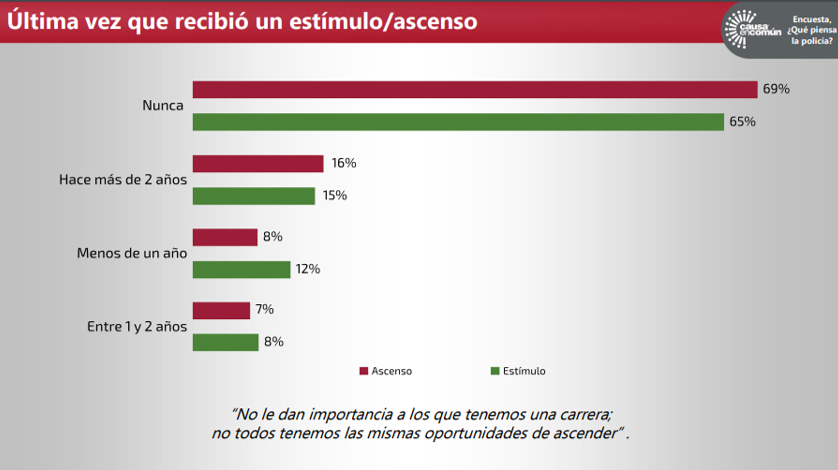 Experts agree that turning this around requires police reform to promote a genuinely professional career service. Governments are aware of this because it was contemplated in the National Model of Police and Civic Justice, which is about to be one year old after its approval by the National Security Council.

“But what doesn’t exist is the political will to make these agreements happen. Governmental approval is required for the Security Council’s commitment to be carried out. As long as that does not occur, as long as neither the federal nor the state governments exert pressure, the National Model will continue to be a simulation”.

The specialists considered that the policy of militarization of public security, with the participation of the Armed Forces and the training under their tutelage of the National Guard, is not only insufficient to restore security in the country but has also contributed to the neglect in which the civilian police are today.

In the specific case of the lack of equipment that the police have to pay for, the specialists considered that it is urgent to review how the resources are destined to federal security funds such as the FASP. 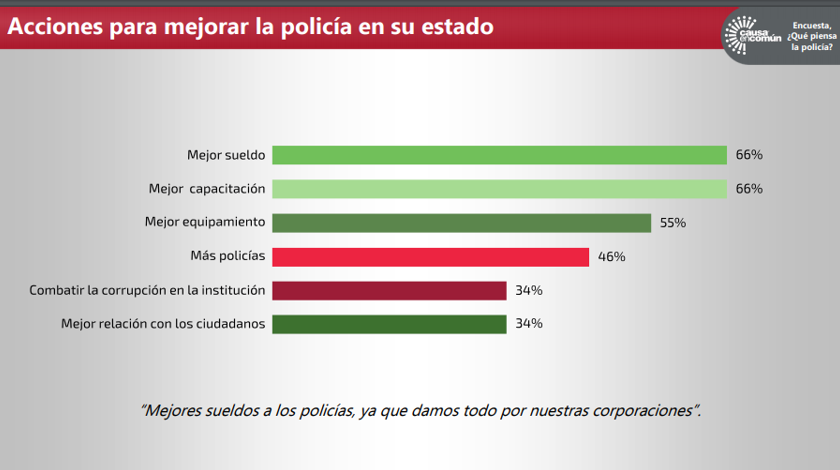 Animal Politico published on June 23 that most of this fund is used precisely to acquire infrastructure, and even, so it is insufficient for the agents. This added to the fact that after one-third of 2020, only 3% of that money had been used.

“We analyzed how the FASP resource had been exercised in a period of five years, and the conclusion we reached is that they are insufficient funds, which have even been reduced in real terms, but furthermore they are not exercised in their entirety. There are under-exercises. And that arises from problems of coordination, planning, and resource allocation. In short: little is spent, and it is spent badly,” said David Blanc, a researcher at Causa en Común.