MEXICO CITY (Times Media Mexico). – On June 3, just the third day of the so-called “new normality,” Mexico once again had its worst day since the beginning of the covid-19 pandemic. Not only exceed 100,000 infected, but more than 1,000 deaths were recorded in the last 24 hours, and almost 4,000 people were added to the list of confirmed cases. 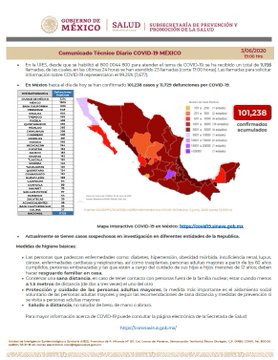 Since the beginning of the pandemic, no more than a thousand deaths had been recorded in a single day. The maximum was 501 deaths, which were registered on May 26.

However, there are another 948 deaths suspected of having occurred due to the disease caused by SARS-CoV-2. 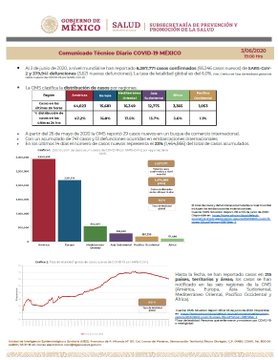 Hugo Lopez-Gatell said, “despite the substantial increase in mortality, it does not mean that all of the 1,092 deaths registered have occurred in the last 24 hours, but rather that this is the date on which they were registered. What we usually do is that when we have an information package, it could be 10, 20, 50, 300, 250 or like that occasion (May 26) which was 501, we communicate them in real-time, the day they are confirmed, the day they are submitted to the report. Not all of them are from the day they are presented.” (SIC)

According to Lopez Gatell regarding the data presented, among the 1,092 deaths recorded this Wednesday, the oldest occurred on April 15 – a month and a half ago – and the most recent is from this June 3.

One way or the other, the contradictions and blunders of the undersecretary for health prevention, Hugo López-Gatell, have ranged from the most uncomplicated health measures to the estimates of the maximum peaks of infections and the “flattening of the curve.
His errors have led to questions about his credibility and his capability to handle the pandemic.