‘Trump threatens to ‘assume control’ of Minneapolis in unusual tweet about rioter ‘THUGS’ as National Guard rolls into the city and George Floyd protests erupt across the U.S.

MINNEAPOLIS (Agencies) – It was the third consecutive night of violent protests following George Floyd’s death. In footage recorded by a bystander on Monday, a black man, can be seen pleading that he can’t breathe as Officer Derek Chauvin, who is white, kneels on his neck.

Minneapolis Mayor Jacob Frey declared a state of emergency Thursday as protests raged into Friday and a police station and other buildings burned in the tension-filled city. 500 National Guard troops arrived at St. Paul and the surrounding communities to suppress the turbulence. A reporter for the Minneapolis Star Tribune tweeted that armored vehicles began rolling through downtown before dawn on Friday.

While that happened, Trump took to Twitter last night to blast Minnespolis’ mayor as ‘radical left’ and warned he would intervene.  As Trump battles Twitter in an open confrontation, his tweet is now hidden by a warning that claims he violated Twitter’s rules about glorifying violence. 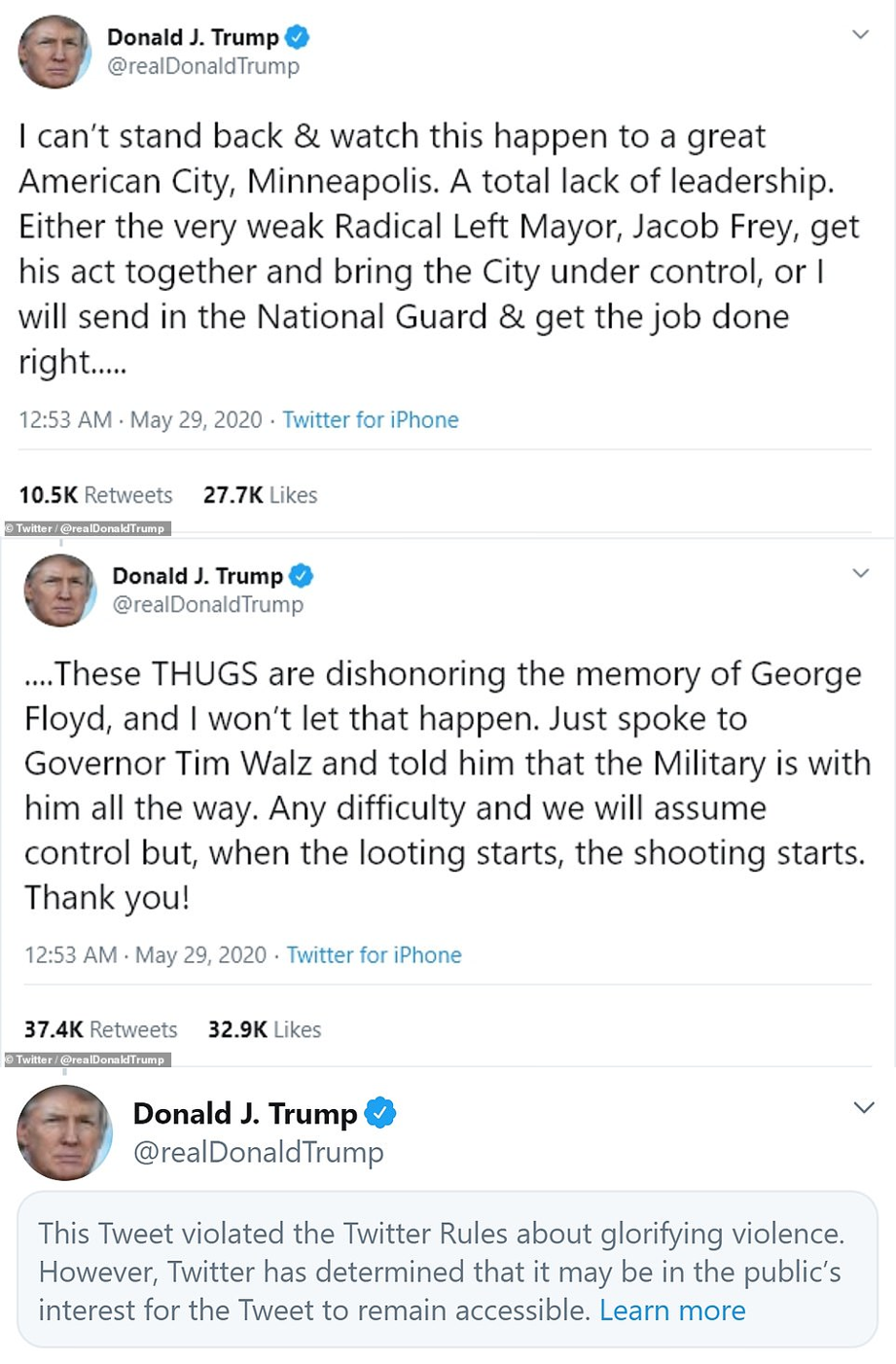 Mayor Frey hit back at Trump’s comments at a media briefing saying he knew nothing of “the strength” of Minneapolis.

“Weakness is refusing to take responsibility for your own actions, weakness is pointing your finger at somebody else at a time of crisis,” he said. “Is this a difficult time period? Yes, but you’re going to be damn sure we’re going to get through this.” Mr Frey said firefighters and police were dealing with multiple fires and instances of looting. “We are doing absolutely everything we can to keep the peace,” he said. “This is one of the most difficult situations that our city has been through. I’m not going to stand up here and say there are easy answers to it, because there are not.”

Amid intense national scrutiny and a heavy police presence, black CNN reporter Omar Jimenez and his television crew were arrested by Minnesota police on live television.

“We can move back to where you like,” he told the officers wearing gas masks and face shields, before explaining live on air that he and his crew were members of the press. “We’re getting out of your way. This is among the state patrol unit that was advancing up the street, seeing and scattering the protesters at that point for people to clear the area. And so we walked away,” Jimenez said before being told he was under arrest and handcuffed by two officers. “Why am I under arrest, sir?”

The anchor of the program is then heard saying, “If you’re just tuning in, you are watching our correspondent being arrested”. The CNN crew have since been released from police custody.

Earlier, protesters set a police precinct building on fire in Minneapolis and riots spread to neighbouring St Paul. As night arrived, people swung baseball bats and fires broke out and lit up the sky. Demonstrators carried clothing, tv’s or mannequins from a looted store. Gunshots could be heard in the distance as helicopters lingered overhead as people carried boxes from shops plundered. However, in a different part of Minneapolis, thousands of peaceful demonstrators marched through the streets calling for justice.

Protests have also spread to other cities including New York, Los Angeles, Memphis, Denver and Columbus in Ohio and Louisville.