Mexico with a new record number of deaths in one day;

As of yesterday, May 22, 2020, the country is among the ten countries with the most deaths due to SARS-CoV2

MEXICO CITY (Times Media Mexico) – This Friday, there was an increase of 2,960 new cases of contagion and 479 deaths. The Director-General of Epidemiology, José Luis Alomía Zegarra, reported that as of May 22, 6,989 deaths, 62,527 confirmed cases, and 13,347 active cases of COVID-19 reported, reaching a new record.

The official also reported that there are 113,742 negative cases and 33,801 suspected cases, out of a total of 210,070 tests performed up to this 61st day of the National Distance Health Day. 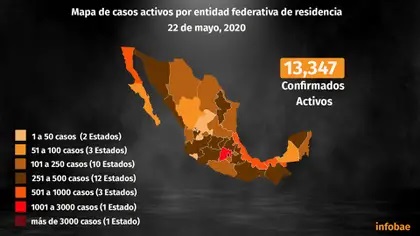 Mexico City and the State of Mexico lead the list of entities with the highest number of deaths by SARS-CoV-2. On the contrary, Aguascalientes, Durango, and San Luis Potosi are the three with the lowest quantity of deaths.

There are 814 suspicious deaths on this day, which could be added to the total number of deaths by COVID-19 when the results are provided.

Dr. Alomía noted that health authorities still have 413,452 tests available to detect COVID-19, this thanks to the fact that they recently received a new shipment that Mexico bought.

Regarding the availability of beds, more than 9,000 are in use. It represents 39% of the availability of the 23,497 total in the country. In national terms, according to data from the digital platform of the IRAG Network (Severe Acute Respiratory Infection), there are still 14,340 beds available. 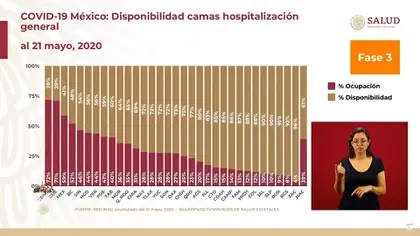 Thus, Mexico City and Cuernavaca are the entities with the highest hospital occupancy. The capital still has 28% of its general hospitalization beds available and 36% with a ventilator.

At the morning conference, President Andrés Manuel López Obrador was questioned about the increase in COVID-19 infections and the increase in deaths, to which he responded that everything “is going according to plan.

Besides, he emphasized that the alarm should not fall and that comparisons should not be made with other countries with smaller populations.