Mexico enters into diplomatic conflict with Canada and the European Union.

Rocio Nahle forced the resignation of Cesar Hernandez, head of the National Regulatory Improvement Commission. She is looking to put the brakes on wind and solar power generation plants. The López Obrador administration does not want to have competition so as not to affect CFE’s income.

MEXICO CITY (Times Media Mexico) – The results do not accompany Rocio Nahle’s management. With Pemex still immersed in the same crisis – if not worse – that was inherited from Enrique Peña Nieto, now the Secretariat of Energy set herself to prevent CFE from losing penetration in the electricity market.

That goal explains Nahle’s desperate lobby to put the brakes on wind and solar power plants. “The real reason is that they don’t want to have competition so as not to affect CFE’s revenues,” explains other officials of AMLO’s 4T. The latter do not share the Secretariat of Energy’s (SENER) strategy.

In recent days, Nahle’s lobbying has intensified. First, it had the National Energy Control Center (CENACE) publish an emergency agreement to limit the operation of these plants and guarantee the security of the system. It only mentions that “the wind and photovoltaic power plants affect the reliability of the system”, without further arguments.

The Secretariat of Energy-Sener requested this agreement to be published as a matter of urgency in the Official Journal of the Federation (DOF), without going through the National Commission for Regulatory Improvement (Conamer), as was appropriate in this case, under the argument that the Covid-19 crisis put the Mexican electricity system under stress. The same request – to avoid the regulatory impact analysis – was made to Conamer, whose head was until today César Hernández.

“Given that probable compliance costs are identified, the Agreement should be subject to the regulatory improvement procedure through a Regulatory Impact Analysis and additionally comply with deadlines and obligations provided for in the General Law on Regulatory Improvement,” (SIC) the agency replied.

A few days later, Cesar Hernandez was forced to resign from the National Regulatory Improvement Commission. A dismissal for not aligning himself with Rocio Nahle, in the facts. “Today my cycle as head of Conamer closes. I thank AMLO, who appointed me as commissioner, and Economy Secretary Graciela Marquez, who proposed me,” the former official wrote. There was no thanks or goodbye for the head of Energy.

But this polemic generated other splinters: letters of complaint arrived from Canada and the European Union because – they say – this decision by Nahle García goes against foreign investments in Mexico.

“This resolution puts at risk the operation and continuity of renewable energy projects of Canadian companies in Mexico. This agreement joins the rest of the measures, changes in laws and policies that attempt against renewable energy investment in their country”, the Canadians complain. 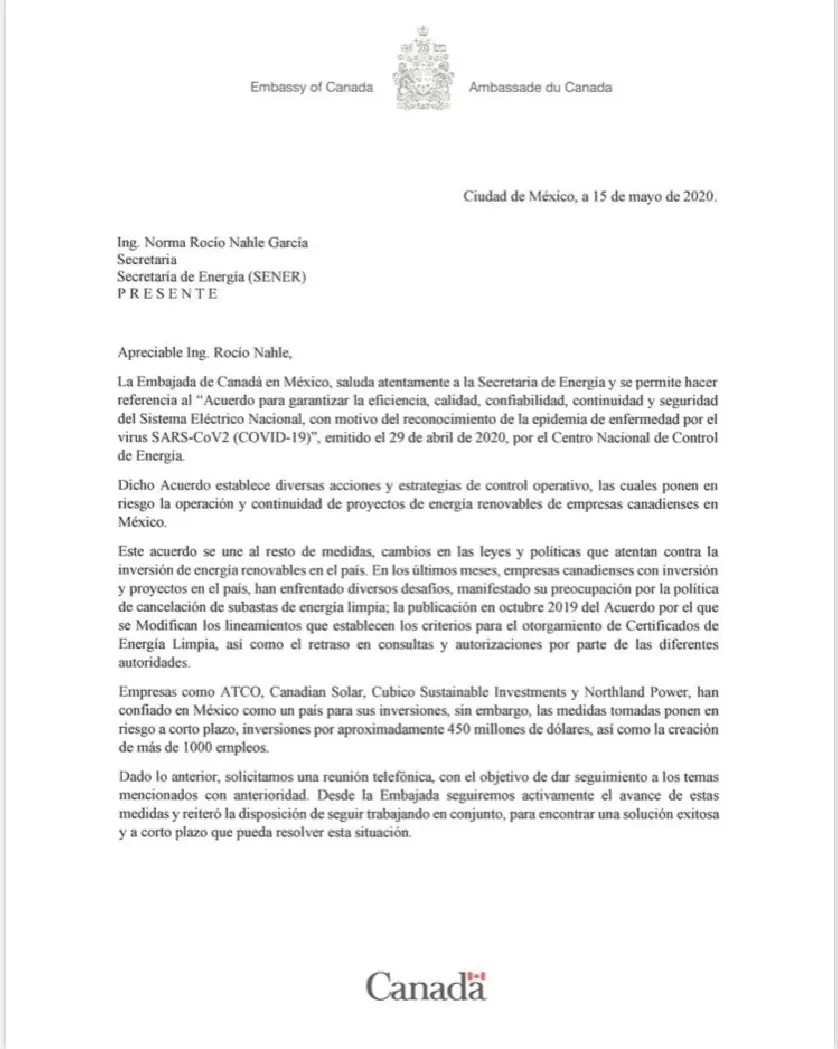 “Canadian companies have trusted Mexico as a country for their investments, but all the measures taken in recent months put at risk, in the short term, ventures of more than 450 million dollars, as well as the creation of more than 1,000 jobs. “Canada requested an urgent meeting to find a solution”.

In a similar tone, various embassies of European Union countries wrote a letter: “We had already raised concerns of several companies involved in the development and promotion of clean Energy in Mexico against some government decisions that are affecting the sector. That is why we had requested a meeting with Sener, which has not taken place so far. But unfortunately, there has been another event that increases our concern. If this measure is advanced, it would negatively impact 44 projects in 18 Mexican states, which would put at risk total investments -including from European Union companies- for 6.4 billion dollars”, they add and conclude with another urgent request for a meeting.

This is not the first episode in which the controversial performance of Secretary Rocio Nahle has put Mexican foreign trade and diplomacy in the spotlight. A month and a half ago, during the increase in Covid-19 cases worldwide. Energy’s head delayed negotiations between OPEC (Organization of Petroleum Exporting Countries) member countries, refusing to reduce Pemex’s barrel production.

After prolonging the international dialogue for a few hours, an agreement was reached by which the United States, in the voice of Donald Trump, committed to reducing the 250,000 barrels of oil that Saudi Arabia and Russia demanded from Mexico. It is still unknown what the Mexican government offered in exchange for the White House’s help. However, President López Obrador has insisted more than once on the non-existence of secret pacts or contracts with “small letters” between his government and the Trump administration.