Death certificates record three times more deaths from COVID-19 on CDMX than reported by the Government.

Between March 18 and May 12, 4,577 death certificates were issued by CDMX in which the words COVID-19, or coronavirus or Sars Cov 2, appear as a confirmed or probable cause of death.

MEXICO CITY (Mexicans Against Corruption and Impunity) – In Mexico City, there are at least 4,577 death certificates in which the confirmed or probable cause of death is stated as Covid-19, a figure three times higher than that reported by the capital’s Government. Those 4,577 deaths correspond to the period from March 18 to May 12.

In a report by Mexicans Against Corruption and Impunity counted 3,209 reports of coronavirus deaths as probable cause, 307 certificates confirming SARS-CoV-2 among the reasons for death, and 1,100 describing the virus as one of the reasons for death, without specifying whether they are suspected or confirmed cases.

As of May 12, the Mexico City government reported 937 deaths from Covid-19, and the Federal Government on its website: https://coronavirus.gob.mx reported 102 suspected deaths from coronavirus in the capital. The difference between what 4,577 death certificates state up to that same date speaks of another reality. There would be up to three times as many deaths in which there was suspicion or confirmation of Covid-19.

Mexicans Against Corruption and Impunity (MCCI) had access to a database of 4,577 pages of death certificates registered in seven courts in Mexico City between March 17 and May 12, 2020. According to this database, all the records describe the cause of death as coronavirus in different forms such as SARS COV2, COV, Covid 19, new coronavirus, coronavirus, or NCOV to describe the virus. You can dowload the death certificates here: 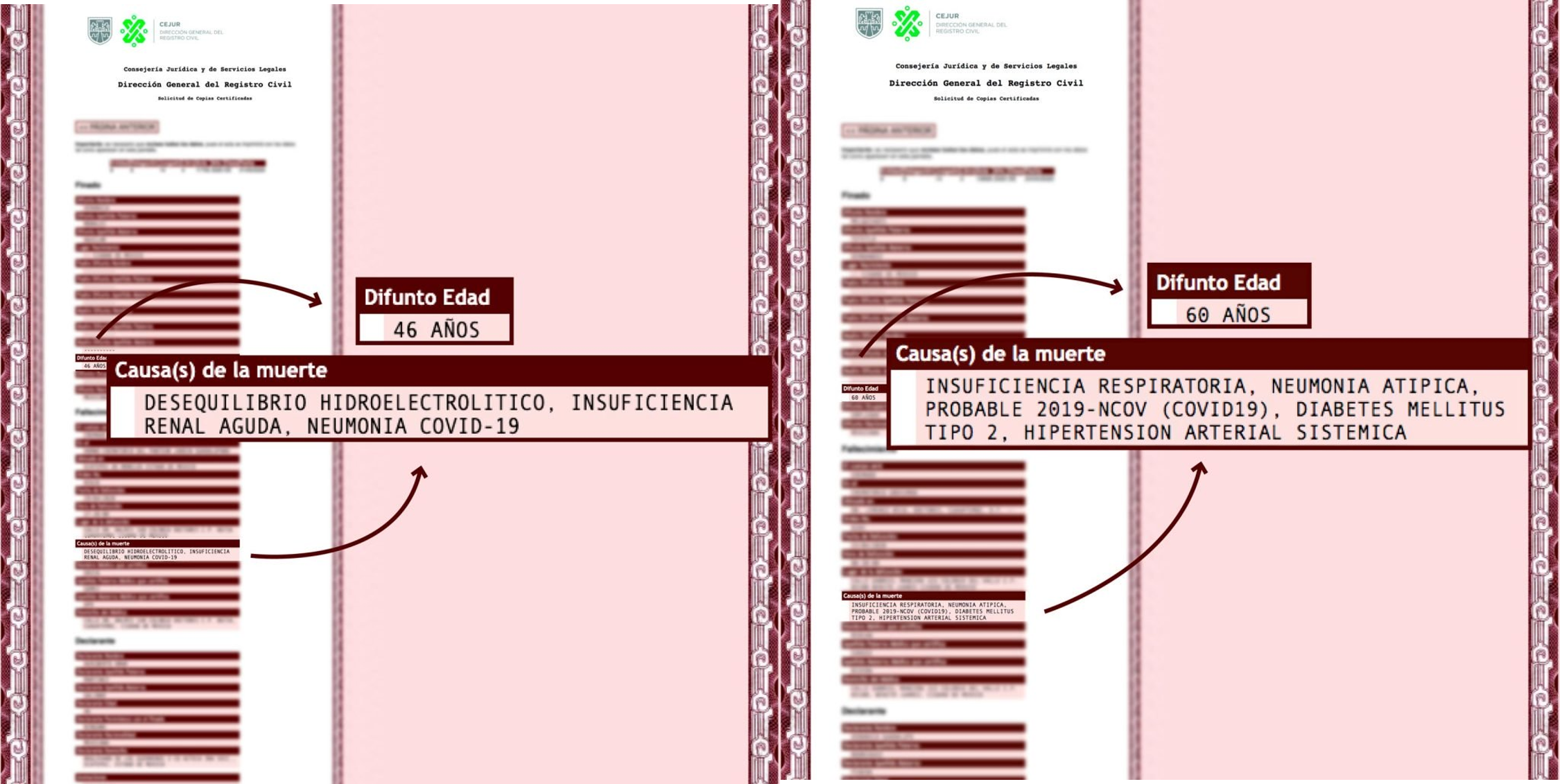 In 3 thousand 209 of these acts, Covid-19 appears as a possible cause of death, in addition to some other conditions such as pneumonia, respiratory failure, septic shock, or multiple organ failure. The wording varies in the reports, but all include the words “probable,” “possible,” or “suspected” coronavirus.

Of the 3,209 reports of deaths with suspected coronavirus, 45 percent also indicate some high-risk disease for patients with Covid: hypertension, diabetes, obesity, asthma, or COPD.

More than half of the deaths recorded in the database with suspected Covid-19 are between 50 and 70 years of age.

On April 28, Undersecretary of Prevention and Health Promotion Hugo López-Gatell said that any patient diagnosed with pneumonia or atypical pneumonia should be considered as Covid-19 until a medical test is made. “During an epidemic like this, where we also have 50 percent, as we reported last night and this morning, of people with this syndrome who are SARS-CoV-2 positive when tested, we must assume that all pneumonitis, all pneumonia, all atypical pneumonia is Covid unless otherwise shown,” he said.

On May 8, The New York Times published a report in which, according to an analysis made by the media, the number of people who could have died from Covid-19 in Mexico City is more than three times what the federal figures show. Two thousand five hundred deaths with suspicion or confirmation of Covid until that moment when the capital government reported 700 in the entire metropolitan area.

That same day, another article in The Wall Street Journal indicated they found 64 certificates whose cause of death was some acute respiratory illness such as atypical pneumonia. Of those 64, in 52 documents, the doctor added the description “suspected Covid-19” or “probable Covid-19 “and in only four” confirmed Covid.

Now, MCCI presents images of certificates that were checked online and that, in the same way as foreign press such as the newspaper El País, anticipated the existence of an under-recording.

After several public questions from national, international media and institutions about the methods for reporting the number of deaths caused by Covid, on May 8, López-Gatell accepted in a video that there was an under-registration of people who die with symptoms of Covid-19 because they were not given the diagnostic test. “You could take the corresponding samples even after death, but this rarely happens, and then we have people who, very, unfortunately, lose their lives and have had the clinical conditions suggestive of Covid but are not registered as Covid because they do not have a laboratory demonstration,” said Lopez-Gatell.

To validate the database to which they had access, MCCI took a sample of 345 pages and verified that the causes of death described there coincided precisely with those that appear in the minutes that can be consulted on the site of the General Directorate of the Civil Registry of Mexico City. In other words, with the help of information processing tools, three hundred pages were chosen at random. The corresponding death certificate was obtained from the website mentioned above, where the causes of death reported by the doctor in the death certificate appear.

Of the 345 records reviewed, 298 coincide in each of the items with the database obtained. Only two pages of death certificates do not exist. So the margin of error is less than 1 percent.

On May 13, the Mexico City State Epidemiological Surveillance Committee agreed to create the Scientific-Technical Commission for the Analysis of Mortality by Covid-19, headed by epidemiologists who will review cases of suspicious deaths by Covid. “There are more deaths than reported daily by the Mexican Government. A scientific committee must be established to know if it was due to the virus or other reasons” (SIC), said the Head of Government Claudia Sheinbaum a day later.

On Monday, MCCI requested a position from the Mexico City government for this report’s revised death certificates. A spokesman said they had no further comment, and that the records would be reviewed by the Scientific Committee installed by the head of Government a week ago.

The original database accessed contained a total of 4,579 comments. A clean-up of the database was conducted to ensure that all records were confirmed or suspected cases of Covid-19; after this clean-up, the database that was worked with consisted of a total of 4,577. The period for recording this information is from March 18 to May 12, 2020.

To verify that the data received were real, a manual review of a sample of 345 minutes was carried out. The sample was made up of three parts: one third corresponded to the court with the most recorded minutes; one third matched to the second court with the most recorded minutes; the last third was divided among all the other courts. The minutes were selected at random using the statistical analysis program R. This exercise was carried out with the sole aim of corroborating that they were real minutes. In the manual review carried out, only two minutes of numbers were detected that were not found by the system. In this sense, the reliability of the database was checked.

The classification of “confirmed” and “suspected” was carried out employing a search for lexical roots related to both terms in the reasons for the death of the database. Cases, where no related word appeared, were classified as “Unspecified.”

To make comparisons between the database related to the death certificates of Mexico City and public information, the database “Information regarding COVID-19 cases in Mexico” published on the website www.datos.gob.mx was analyzed. A clean-up was carried out so that only information related to confirmed or pending cases (suspects, according to the definition of the Ministry of Health), registered in Mexico City until May 12, 2020, was taken into account.

The code and the anonymized databases used to perform this analysis can be downloaded here.