Chronicle of a pandemic foretold – AMLO and his words of denial and dysfunction.

“It’s not even equivalent to the flu… It’s nothing to worry about,” AMLO

MEXICO CITY (Times Media Mexico) – Mexico is in the most critical stage of the coronavirus pandemic. It has infected more than 4 million people worldwide. Andres Manuel Lopez Obrador’s administration has already presented a plan to reduce the number of people affected by the epidemic.

January – “It’s nothing to worry about.”
January 22 – AMLO reports two possible cases of coronavirus were detected in the country, of which one had already been ruled out, and the second was under observation. “The coronavirus is being dealt with.”

January 28 – The threat of the spread of the coronavirus, which is affecting several populations in China, is generating nervousness in international financial markets, including Mexico. On that day, the President declared that the country was prepared to face the situation. “Fortunately, our country is one of the most prepared and least risky countries to be affected by this virus, so that we can be calm, attentive, of course, but calm.”

January 31 – At the end of the first month of 2020, the President asks not to be alarmed by the spread.“Don’t be alarmed. This virus, called coronavirus is not so harmful, so fatal. However, it is so restless, well, so much so that it is altering the parity of the dollar with the world’s currencies, that is, it is generating some concern, some uncertainty, not so much in the case of Mexico. Fortunately, we are still below 19 pesos per dollar”.

February: The beginning of the pandemic
“We can face this situation (…) It is not, according to the information we have, something terrible, fatal. It’s not even equivalent to influenza… It’s nothing to be worried about.” AMLO said at the beginning

March: “Kiss and hug… go out to eat”.
AMLO was highly criticized for continuing with the tours once the pandemic started. His statements were: “do not to stop going out” or to take “exaggerated” measures.

March 2 – During his morning lecture, he is asked if he is concerned about the coronavirus issue, to which he replies: “Mexico has resisted. Our economy, especially the peso, endured this first stage of ‘propaganda’ about the coronavirus.” And he predicts: “I’m sure that this is going to normalize, stabilize. It is a global issue, but the markets will be increasingly calm, that is my prognosis”.

March 4 – Only 5 cases of the disease had been diagnosed in the country. That day the president referred to one of the first measures announced by the Undersecretary of Prevention and Health Promotion, Hugo López-Gatell: stop hugging and kissing.

“Look, about the coronavirus, and that you can’t hug; you have to hug, nothing happens.” The president continued to tour in different states of the country. He was the object of numerous criticisms as he hugged and greeted people. The contagion was slowly but steadily increasing.

March 11 – Covid-19 is declared a pandemic by the World Health Organization (WHO), and in Mexico there are 19 confirmed cases. The US announces the suspension of flights from Europe and López Obrador points out: “Our economy is strong, we have healthy public finances, and we have sufficient reserves to face any crisis that may arise”.

March 15 to 17 – AMLO continued to say things like, if foreigners were trapped in Mexico, “Here we take care of them, no matter what country they are from, it is universal brotherhood.” Workers from the National Institute of Respiratory Diseases (INER) denounced the lack of supplies to attend to the pandemic. He also said he had “a lot of faith” in getting Mexico out of the epidemic.

March 18 – The president decided to present to the Mexican people the protective shields he had for the pandemic: clovers, amulets, and stamps that he carries in his wallet. 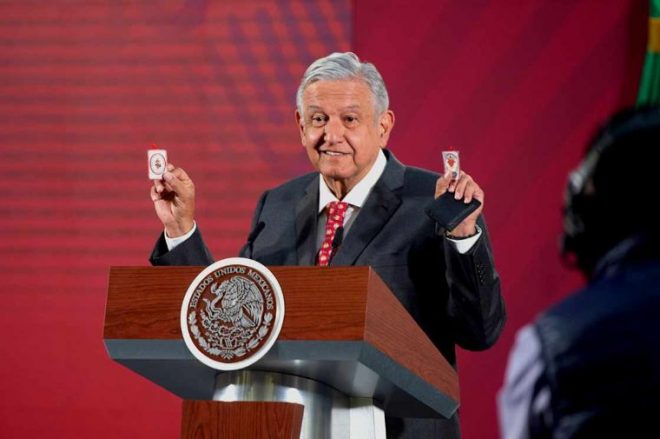 March 22 – The president invited Mexicans to continue to take to the streets, even though Mexico had more than 300 confirmed infections. There was already one community infection, in addition to two deaths.

“I am going to tell you when you do not go out, but if you can and have the economic possibility, continue taking your family to eat, to restaurants, to the restaurants and fondas because that is strengthening the economy.” (SIC)

March 26 – 8 people dead and 585 infected, without the country has not come close to the epidemic peak. López Obrador announced that on April 19, Mexicans would come out of the emergency.

April. “Like a ring to the finger.”
April 2 – After the start of Phase 2 of the pandemic with 1,510 infections and 50 deaths, the president declared: (…) that’s why we’re going to come out stronger, in other words, this came as a ring to our fingertips to strengthen the purpose of Mexico’s transformation.” (SIC)

April 6 – After presenting his “Plan for Welfare and Employment” in the empty courtyard of the National Palace, the president said that “a pandemic can’t affect both the economic and social aspects.” He assured that Mexico was one of the countries with the least coronavirus in the world at that time. Infections began to accelerate, and the pandemic reached its third phase.

April 26 – 1,351 Mexicans have died from COVID-19, and more than 14,000 were infected. In a Sunday message to the people of Mexico, Obrador said: “We’re doing well, we’ve succeeded because we’ve been able to “tame the epidemic.” The scientific community and the media began to question the accuracy of the government figures presented daily at the afternoon conference led by Lopez-Gatell.

April 29 – Most of the Mexican population is still confined, almost 2,000 dead from the disease, and 17,77 infected. The president again: “the contagion was reduced, it became horizontal, the curve has been crushed.”

May: A flattened curve that continues to increase.
Fifty-two days have passed since the “National Day of Healthy Distance” began. With a pandemic still on the rise, the president presented the plan to reopen the economy to the “New Normality.” With the increase in cases also came the saturation of hospitals. With that statement, the criticism from the population and Mexican media about the government’s refusal to make extensive tests of the disease.

May 12 – 38,324 infected, and 3,826 deaths were counted. By the time the virus hit, the supplies Mexico had bought from China had been deemed insufficient. The sick were getting worse in a matter of hours. Hospitals were becoming increasingly overcrowded, and laboratories had a waiting list for COVID-19 tests.

May 13 – 4,220 deaths and 40,186 people have been registered as infected. AMLO presented the plan to reopen the economy to the “New Normality”. This plan contemplates the country’s progressive decontamination, beginning with the municipalities that have little or no coronavirus cases on May 18 and continuing until June 1.

May 15 – In the National Palace’s Treasury Room, AMLO stated that international media such as The New York Times, Washington Post, The Financial Times, and El País lie and slander because of the articles they wrote about his government.

Authorities also reported that there had been 45,032 confirmed cases of the disease in Mexico since the beginning of the pandemic.

Lopez Obrador will continue to deliver stumbling, incoherent words and, at times, outright fictitious facts. It is just a matter of keep listening.

The Yucatan Times
Editorial Board