After AMLO claimed they had tamed the pandemic, infections tripled

From April 26 to May 18, the number of deaths from coronavirus has increased by 294%. The number of confirmed cases has risen 251%, according to figures from the Ministry of Health.

MEXICO CITY (Times Media Mexico / El Universal) – On April 26, President Andrés Manuel López Obrador posted a message on his social networks stating that the country had managed to “tame the epidemic” caused by the SARS-CoV-2 virus. “We are doing well because the epidemic has been tamed. Instead of it taking off, as has unfortunately happened elsewhere, here the growth has been horizontal, and that has allowed us to prepare ourselves very well to have all that is required of medical teams and specialists,” AMLO said in his message.

EL UNIVERSAL newspaper made a count of the number of confirmed cases accumulated and new, as well as the people who have died since the President’s announcement.

On April 26, the Health Ministry reported a total of 14,677 confirmed cases of Covid-19 accumulated in its nightly press conference since the first case was presented in the country on February 27. That day the agency also confirmed the death of 1,351 people from the disease.

As the days have gone by, the number of tested positive people has increased: at last night’s conference, the Undersecretary for Prevention and Health Promotion, Hugo López-Gatell Ramírez, announced that 51,633 people were ill and 5,332 had died.

The President announced that the country had managed to “tame” the epidemic, yet 3,981 victims and 36,956 new cases have been added. 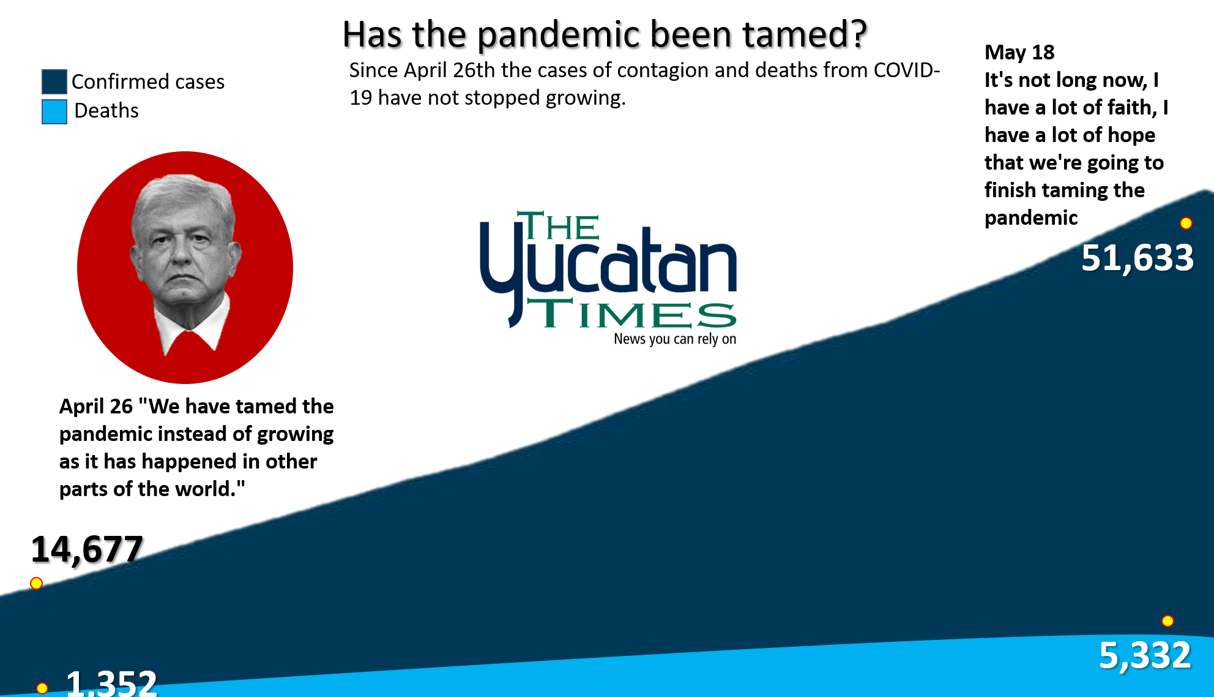 The Institute of Metrics and Evaluation for Health (IHME), an independent global research center attached to the University of Washington in the United States, estimated that by August 4 the country would reach a total of 6,859 deaths from the virus, which will be the maximum amount entered during the epidemic.

El UNIVERSAL newspaper consulted Samuel Ponce de León, a member of the University Commission for the Care of the Coronavirus Emergency of the UNAM, who considered that it is not possible to “literally flatten” the infection curve; this has never been the objective because it is not possible to achieve it. “If someone wants to understand it that way, they will certainly have to place themselves better in their reality. We understand that there is a natural epidemic curve, without interventions, that has a certain bell shape. When an intervention is established, that curve is modified,” he said.

Ponce de León explained that the federal government is taking action. For the pandemic mitigation measures, the fundamental objective is for people to access medical services when needed. In this aspect, it is “correctly achieving its objective.”

Jorge Baruch, also a member of the university commission for the Covid-19, explained that the flattening implies a slowdown in the number of severe cases reported day by day throughout the epidemic. This has not been the case, if Mexico is compared with other countries such as Spain, Italy, and the United States. Given that the country is in phase 3 of transmission, more severe cases will continue to occur. In a shorter time, so it is understandable that Mexico has increased its cases by 300%.

“It is a matter of speed, not the number of cases. We are not on the way out. Right in Mexico City, we are at the peak of the epidemic. In other countries, an impressive number of cases occurred in less than 20 days, which did not happen in Mexico. The number of cases, even if it’s the same, is distributed over a longer period, so it looks flatter. This does not mean that we will not go through the same number of phases,” he said.

Víctor Olivo Iglesias, professor of public health and community at UNAM and member of the citizen initiative Verificovid, created to combat misinformation and false news generated by the health emergency, also explained in an interview that flattening the curve means achieving a “pond” in the number of infections, that is, that the number of new cases does not exceed 150 per day.

He pointed out that we still need to know the effect that Mother’s Day had last May 10, when many people broke confinement to go out and buy food and visit their mothers.

“To stop the growth means that there are fewer cases every day. It is is not the time to celebrate; there is a possibility that we will reach a higher ceiling, reaching 3,000 cases a day,” explained the academic.