The Saint Lucia airport will be more expensive than NAIM

MEXICO (CAPA / IATA / Times Media Mexico) – A report presented by an Australian-based firm specializing in the aeronautical sector, called Centre for Aviation (CAPA), said that the airport projects of Andrés Manuel López Obrador are proving to be $700 million more expensive than having completed the construction of the New Mexico International Airport (NAIM).

The report explains that the cost of construction of the new airport in St. Lucia, is already located in 4.7 billion dollars, although it could increase even more, since the last estimate is from August 2019. However, that will be difficult to know, as the project has now been classified as confidential.

The 4.7 billion dollars will have to be increased by the costs of the NAIM cancellation for compensation payments and debt bonds, which represents an additional expense of up to 9 billion dollars. For both items, the total cost of federal government projects already amounts to $13.7 billion, versus $13 billion needed for NAIM termination.

Additionally, the Lopez Obrador Government will stop earning from the sale of the land of the Benito Juarez Airport, once the NAIM is in operation, a project that the firm qualified as world-class and endorsed by the International Air Transport Association (IATA). “The cost of construction was announced at approximately 1 billion dollars in 2018. It then rose to 3.6 billion dollars in February 2019 and increased further to 4.7 billion dollars in August 2019. In one year, it increased almost five times the original estimate,” CAPA said.

In a virtual conference, Peter Cerdá, IATA’s vice president for the Americas, said airlines do not know when demand will recover, so they are asking on a global scale that airport projects and expansions be valued differently.

“Our position is that the Mexican government should evaluate any massive construction project that is carried out in the country because the panorama will be different when we come out of the crisis. Saint Lucia would be one of the initiatives that we would say: ‘Let’s put it on hold, let’s make an assessment, let’s talk. And for the well-being of the Mexican government, which has this project, it is to sit down with the industry when it can and understand what the capacity will be that will be flying,” he explained.

According to IATA, passenger traffic fell 85% in the country, due to restrictions on operating in other countries. 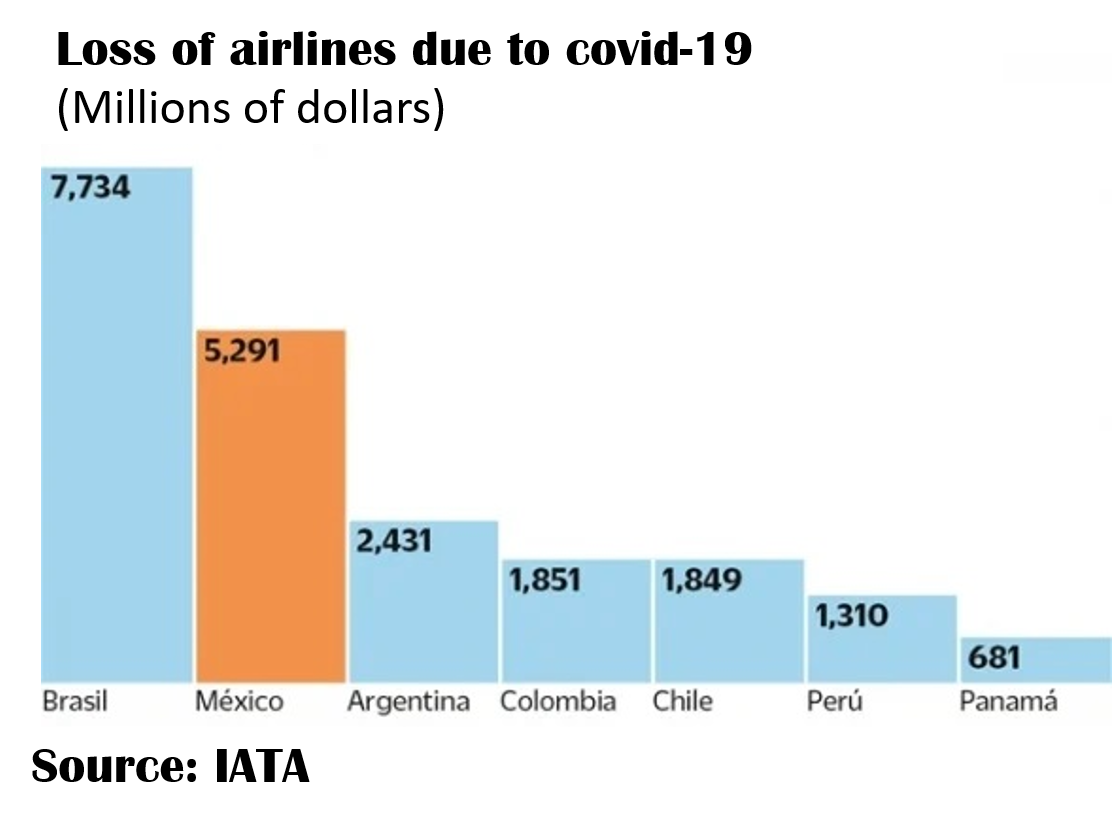 Casualties due to contagion
In March, Mexican airlines already showed signs of being affected by the virus.

Aeromexico carried 1.3 million passengers, a fall of 41.5% compared to March 2019.
Volaris carried 1.6 million passengers, 13% less than March of last year.
Viva Aerobus increased 1% by transporting 850,000 people in the month, although its occupancy factor decreased by 10.4% due to the health emergency.
Interjet has not released its report on passenger traffic in March, but since the 17th announced a 40% reduction in seating capacity to the expected lower market demand and suspended its international routes from 24 to March 31st.

On April 5th, López Obrador ruled out canceling or delaying his flagship projects, such as the Santa Lucía airport or the Dos Bocas refinery, because of the health crisis.

St. Lucia’s airport aims to reduce the saturation of Mexico City’s International Airport, but if demand does not improve in the coming months, airlines will begin to run out of cash, and some may go bankrupt.

If some government support for airlines is not approved, airlines in Mexico will lose 5,291 billion dollars in revenue in 2020.