MEXICO (IMF/El País) – Mexico has become the Latin American epicenter of the economic crisis due to the coronavirus. The second-largest economy in Latin America will suffer a 6.6% decline this year, according to the projection made public this Tuesday by the International Monetary Fund (IMF) and will chain two consecutive years in negative: it had already fallen a minimum of 0.1% in 2019.

“No country is safe,” says the chief economist of the multilateral organization, Gita Gopinath, who predicts a fall in the global economy of 3%-, the U.S. country will take the worst part by a combination of factors. Exposure to the United States, dependence on global supply chains profoundly affected by the crisis, blow on tourism and crisis in an oil sector that, despite having lost importance in recent years, still has relevance in the Mexican economy.

In the rest of North America, the U.S. will suffer a contraction of 5.9% this year and Canada, 6.2%. The first Latin American power, Brazil, will also face the consequences of the pandemic, with a fall of 5.3%, while the Argentine economy will be left with 5.7%.

In the Andean countries, the shock will also be reliable but smaller: 4.5% in Chile and Peru, and 2.4% in Colombia. In all cases, with the sole exception of Peru, the figures are worse than the World Bank’s projection last Sunday. Venezuela, since it fell into the spiral of economic and political crisis, is a case apart: its GDP will plummet another 15% this year, with inflation still running at around 15,000%.

The World Bank is projecting a 4.6% drop in Latin America’s GDP, the largest since records. Latin American economy to shrink by 1.8 to 5.5 percent this year as pandemic advances, IDB says: “The world has changed dramatically in the last three months, since our last update,” acknowledges Gopinath. The scenario of a pandemic had been contemplated as a possibility in economic policy debates, but none of us had a significant sense of what it would be like and what it would mean for the economy. 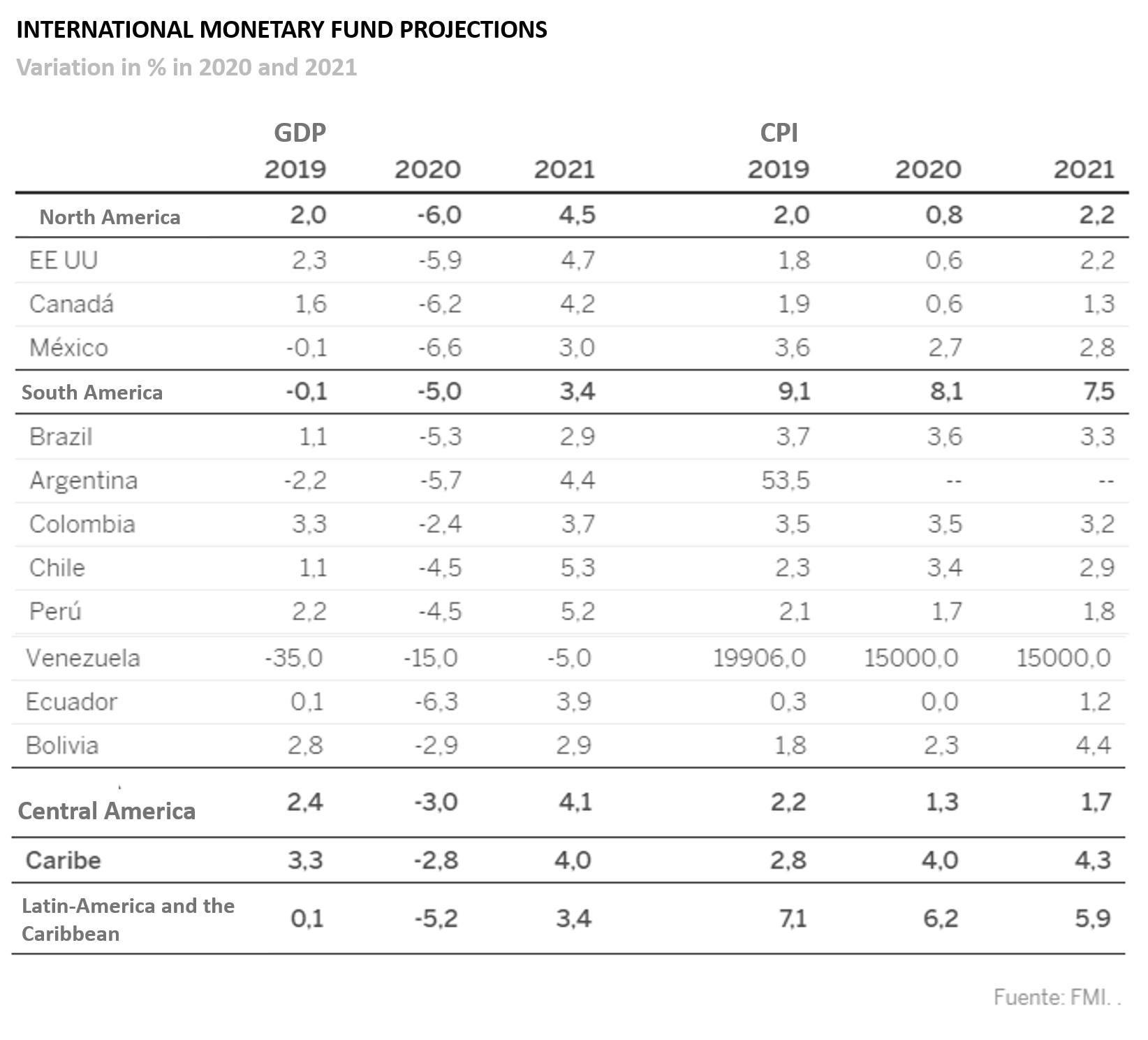 In the case of Latin America, as in Europe or the United States, the impacts will be more than severe: the minimal 0.1% growth last year will be transformed into a deep drop of 5.2%, a figure unheard of in at least seven decades. Not even at the hardest moments of the debt crisis of the 1980s, the germ of the region’s first decade did Latin America and the Caribbean suffer as much as in this 2020 marked by the coronavirus.

In per capita terms, as the Fund points out, the blow will be even more significant than in the global financial crisis of a decade ago, with the risk that the situation will worsen even more worldwide in the coming months if social distancing measures are extended, and the development of the vaccine against the virus is postponed. In 2020, per capita GDP will fall by 7.6% in Mexico and 5.9% in Brazil, the only two Latin American countries for which it provides data. The shock will also be considered in the USA (-6.4%) and Canada (-7.5%).

As in the rest of the world, the region’s economic recovery will come next year.

Then, the region’s GDP will bounce back 3.4% led, paradoxically, by the countries that will suffer the least from the blow: the Andean bloc. Chile and Peru will pull the plug, with a growth of 5.3% and 5.2%, respectively, and Colombia will register an equally impressive growth of 3.7%.

With no sign of recovery insight and amid the oil disaster, the Venezuelan economy remains the significant regional exception, with or without a coronavirus. In essence, in 2021, it will suffer another fall, the umpteenth already, which will be around 5% from an already shallow base. In just seven years – from 2013 – it will have left almost half of its GDP behind.