In terms of calculating rates and proportions, there is a new type of arithmetic difference from the traditional one. That is what I have deduced from Dr. López-Gatell and his team of collaborators, because of their way of accounting for the official data on the COVID-19 epidemic in Mexico. It only does not fit with what I thought I had understood about the arithmetic of proportions in my elementary, middle, and high school studies, Bachelor of Arts in Actuarial Sciences, Master’s, and Doctorate in Mathematical Sciences.

With an outstanding curriculum in epidemiology and public health, Dr. López-Gatell and his team have the luxury of mixing data from different dates and frames of reference at will, without any justification or explanation. Unfortunately, it is a wrong time to criticize his accounts, after a well-known media outlet disqualified him with I don’t know what intentions, thus provoking indignation in public opinion, as well as massive support in social networks for the work developed by Dr. López-Gatell’s team. My interest in the subject, as a citizen and the academic I am, and my preparation in areas of Mathematics and Statistics takes me along the path of analyzing the epidemiological data that have been presented to us, as well as questioning the calculations that are being made with them. My position is one of scrutiny, not disqualification.

This is not the first opinion I have expressed on the subject, and I have already received comments that question my motivations. I would like to make this clear: I am not involved in politics, I am not interested in participating in politics, nor am I interested in the spotlight, the path to which I aspired has already been achieved. From there, it is that I have the luxury of expressing freely, without commitments or hidden agendas, what I think and believe I can understand, with the sole purpose of contributing something useful for the best possible use of the data associated with the COVID-19 epidemic in Mexico.

The sentinel method
On February 27, 2020, authorities from the Ministry of Health reported the first confirmed case in Mexico of a person with COVID-19. Since then, they have updated the total number of confirmed cases and deaths from the virus daily. While it was a modest and imported number of instances, these authorities could follow up on the origin of each case. As contagion has increased, and particularly since cases began to be transmitted locally and no longer by importation (community spread), it was foreseeable that the number of confirmed cases would start to significantly underestimate actual contagion. The Ministry of Health began to complement epidemiological surveillance with another form of broader measurement, known as “the sentinel method” which primarily consists of collecting information from 475 respiratory disease monitoring units, from among the more than 26 thousand health units throughout the country, as a representative sample, to estimate the total number of infected people in the country.

The first time health authorities presented results from the sentinel method was on April 8, based on data at the close of epidemiological week 13, which according to the Health Ministry’s schedule, ran from March 22 to 28, giving an estimate of 26519 people infected with COVID-19. It is worth noting that the cumulative number of confirmed cases of COVID-19, reported by the same health authorities, was 848 people as of March 28. This implies that the factor relating the number of confirmed cases to the estimated cases is 31,2724 31,2724 × 848 = 26519.

But Dr. López-Gatell and collaborators decided to divide the 26519 estimated cases as of March 28 by the 3181 confirmed cases as of April 8!

This gives a factor of 26519 ÷ 3181 = 8.3367, giving the false impression that the reality of contagion is only 8.3 times that of confirmed cases, when in fact, according to the official data itself, it is 31.3 times. As much as I search and investigate, I cannot understand the meaning or justification of dividing the data of estimated cases as of March 28 by the data of confirmed cases as of April 8.

The Sentinel method case estimates are updated weekly, as opposed to confirmed cases reported daily. The second time health authorities said sentinel method estimates was on April 16, with data from Epidemiologic Week 14, which ran from March 29 to April 4, with a view of 55951 cases, which compared to 1890 confirmed cases as of April 4, gives a factor of 55951 ÷ 1890 = 29. 6037, similar to the one correctly obtained for the previous epidemiological week (31.3), and far from the element of 8.3; however, Dr. López-Gatell and collaborators did not say anything about it, nor did they update this factor, in the press conference of April 16, and no reporter questioned it. But what was recorded since April 8 in the memory of many was that the real contagion is only 8.3 times the confirmed cases, when in reality, it is approximately 30 times the confirmed cases, according to the same official data. 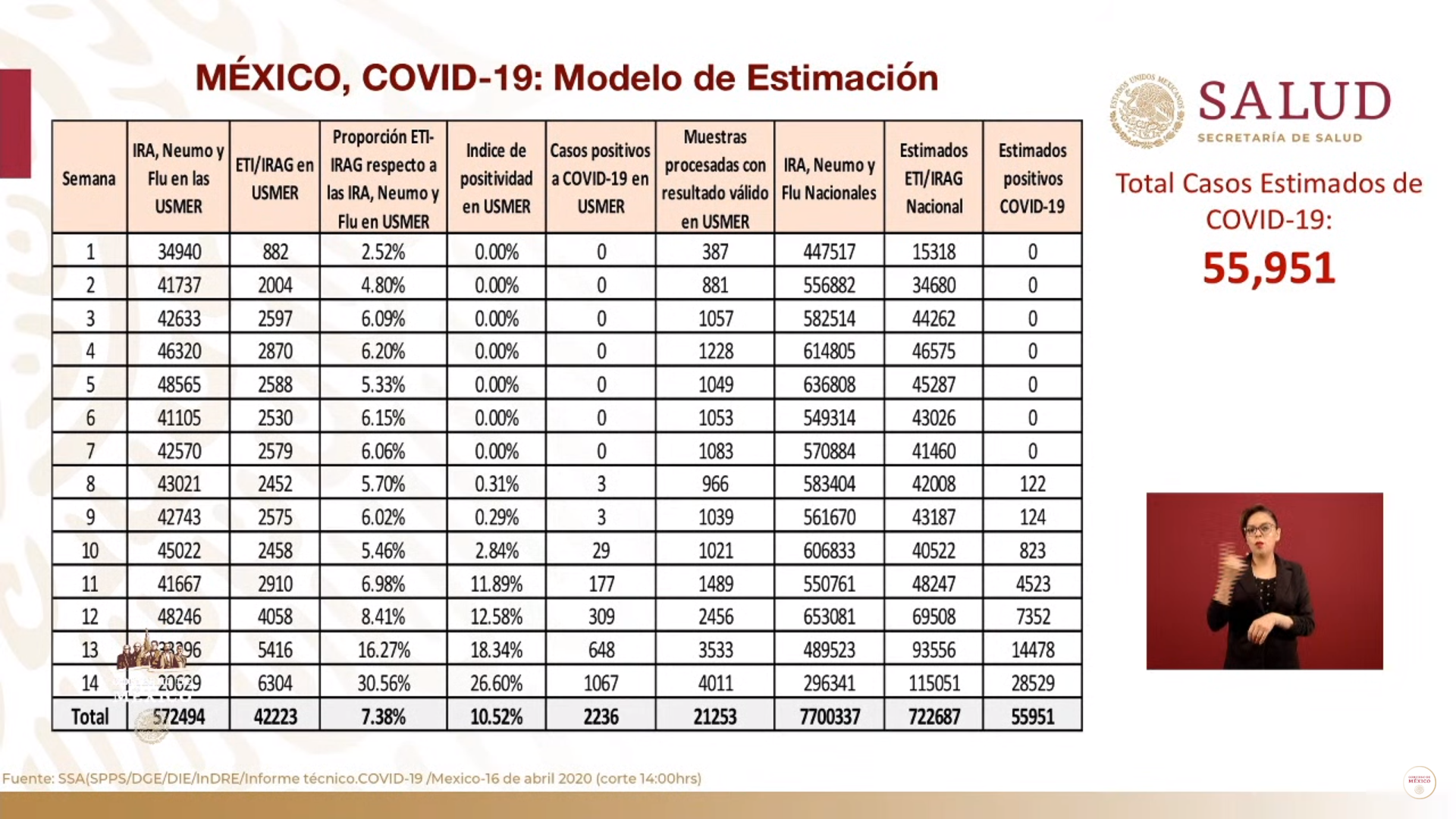 The fatality rate
The rate has been calculated in Mexico and the rest of the world as the proportion, in percentage terms, of confirmed deaths by COVID-19 to the total number of confirmed cases. In Mexico, the first confirmed case of death by this virus occurred on March 19. Still, it was not until April 5 that health authorities included in their daily technical report the calculation of the death rate in Mexico, obtaining for that day 4.39%, which is obtained by dividing the 94 confirmed deaths by COVID-19 by 2143 confirmed cases up to April 5 and multiplying by 100 to convert it to a percentage. It is worth mentioning that on that same date, the global case fatality rate was 5.5%, that is, higher than Mexico’s at that time. 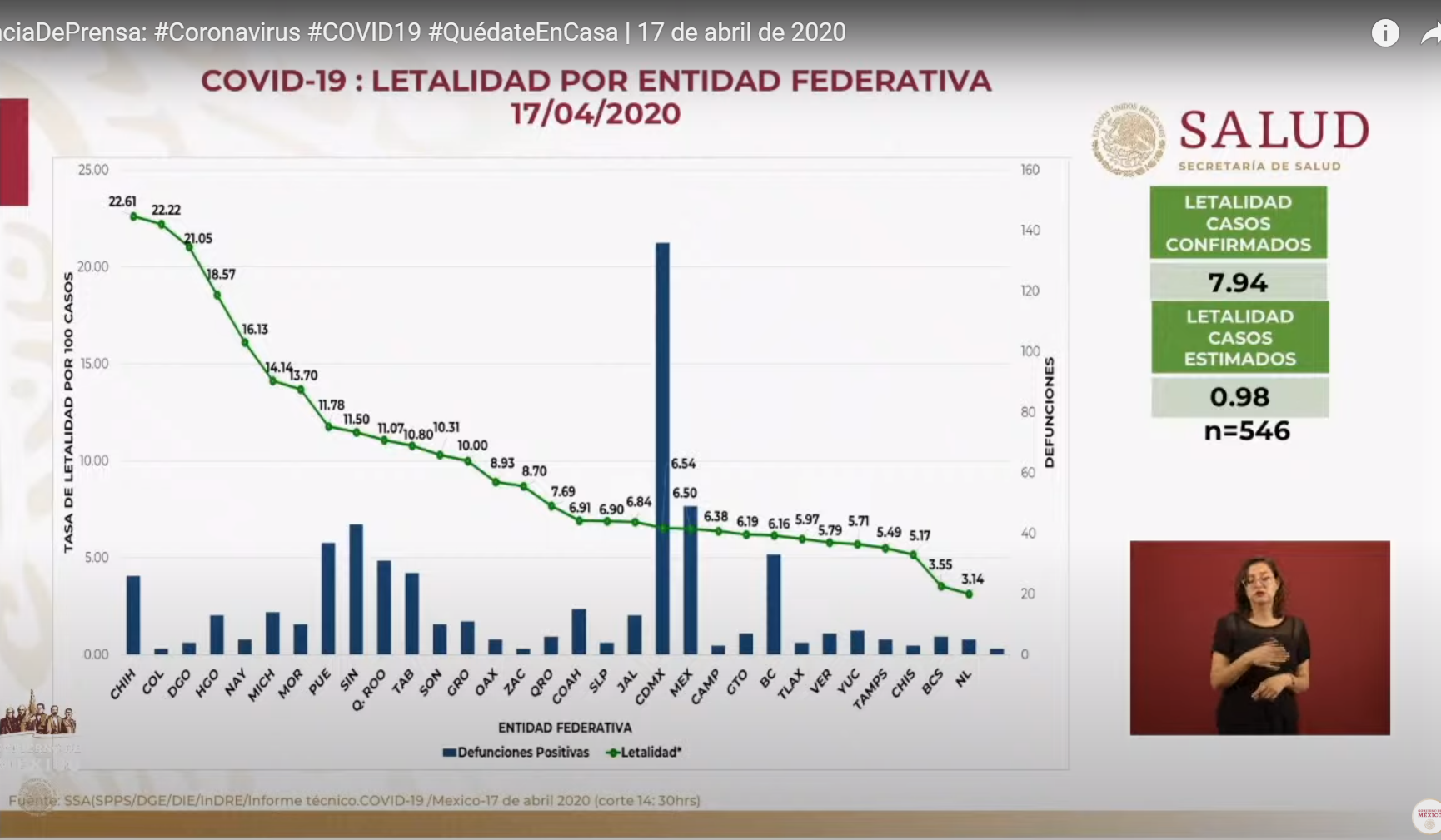 There are two questionable aspects here. First, divide an amount corresponding to April 17 (546 deaths) by an amount corresponding to April 4 (55951 estimated cases). Second, grant that the confirmed cases are below the estimated cases, but do not consider that the confirmed deaths may also be underestimating the actual deaths from IDOC-19 (e.g., deaths from atypical pneumonia for which it was not possible to verify the presence of the virus). This creates a misconception that the case fatality of IDOC-19 is far below the global case fatality, or at least creates confusion by having two different case fatality rates.

The incidence rate
Health authorities calculate this rate as the ratio of the number of confirmed cases among the total population, multiplied by one hundred thousand, to obtain a rate per one hundred thousand inhabitants. By April 17, they had them: 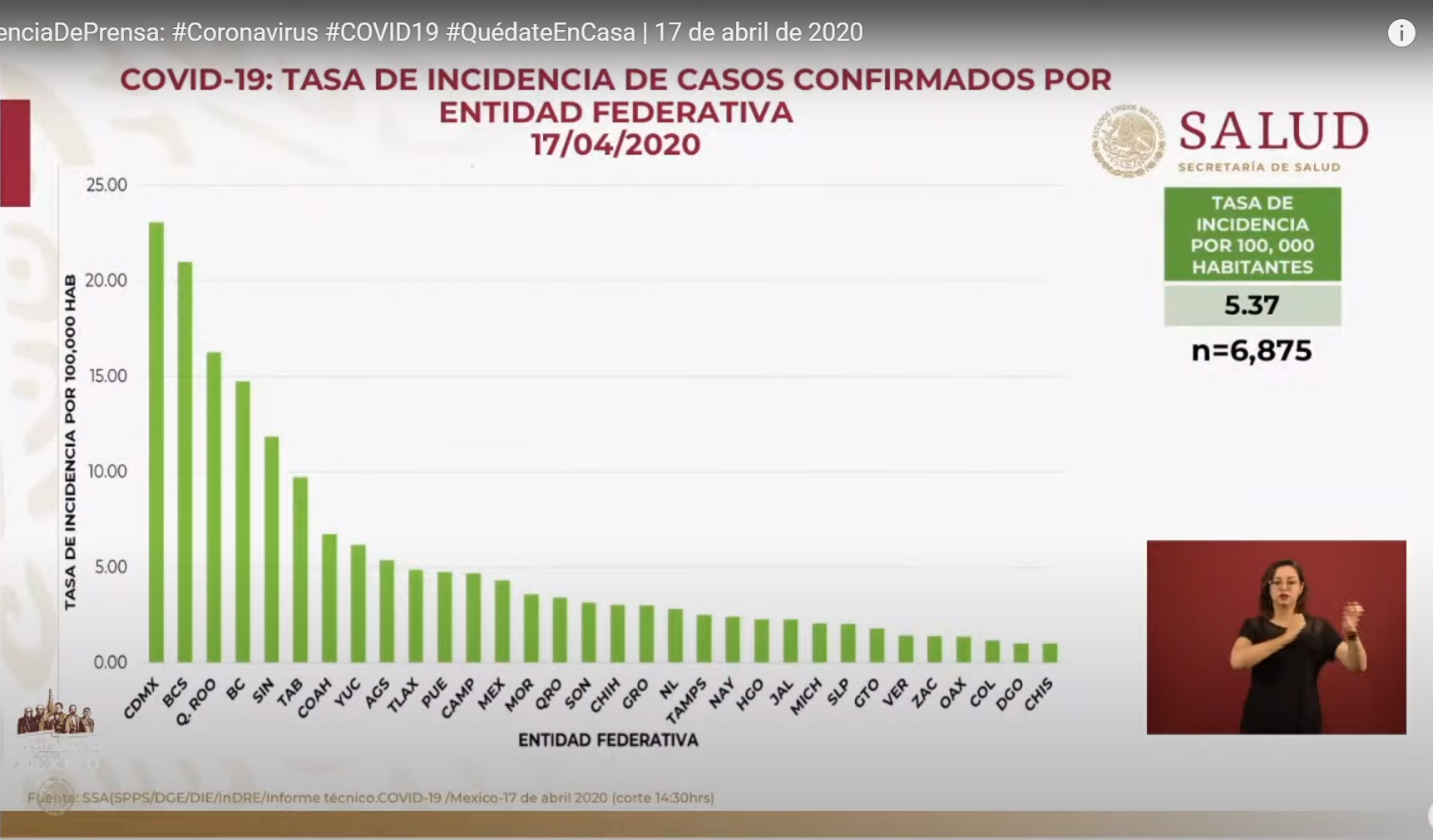 Far from the 5.37 rate, they reported. Moreover, let’s remember that the amount 55951 corresponds to April 4, and therefore 43.73 would be the incidence rate on April 4, not April 17, as reported by health authorities. The April 17 rate should be 29.6 times the number of confirmed cases as of April 17, divided by the population of Mexico and multiplied by 100,000:

This is almost 30 times more than reported by health authorities!

Final Comments
The calculation of rates and proportions are a matter of the mathematical discipline known as Arithmetic. It is not a specific epidemiological issue, so with all respect to the trajectory in epidemiology and public health that Dr. Lopez-Gatell and his team of collaborators have, I request a clarification regarding what I point out.

I confess that I tried to convey my concerns to several reporters who are generally present at the 7 p.m. press conferences given daily by authorities of the Ministry of Health. They thanked me for sending them my analysis, but up to the moment I am writing these lines, none of them has asked anything about it at those press conferences. The monopoly of what is proposed is held by those who attend these conferences, and ask what they decide or are told by their bosses.

I also tried, with more of a testimonial purpose than a realistic one, to send it directly to Dr. López-Gatell through his accounts in social networks. Still, the number of messages sent to him is such that mine is one more among thousands that it is sure not seen by him or by those who help him manage his accounts.

If anyone has a way to make these concerns known, please do so. I am not interested in credit, if my arguments convince you, please feel free to adopt them, I am merely interested in understanding and contributing to the best possible interpretation of the data on the epidemic that is plaguing my country.

Arturo Erdely is a Professor at the UNAM -National Autonomous University of Mexico- FES Acatlán. He coursed all his studies at the UNAM. He is an Actuary with a master’s degree and a doctorate in mathematical sciences (orientation: probability and statistics). Level 1 member of the National System of Researchers of CONACYT. Full-time professor with a “C” degree at UNAM. Professional experience in the financial environment (trading and investment funds).