Mexican doctors protest due to lack of supplies and adequate equipment

MEXICO CITY (Times Media Mexico) – Various media outlets are reporting nationally and internationally on the protests by Mexican doctors.
More and more doctors and health personnel from different hospitals in Mexico are raising their voices to protest the lack of supplies and adequate equipment to attend to cases of coronavirus.

Yesterday, Monday, during a demonstration in the country’s capital, personnel from the Regional Hospital 1 de Octubre denounced a death and several infections due to the lack of protective equipment. “They did not make the proper ﬁltros and made up the diagnoses. They were handling them as diﬁcultad respiratory, inﬂuenza, and typical pneumonia. Now there are many infected personnel”, revealed nurse Doris Lopez.

Also yesterday, specialists from UNAM assured that the epidemic is spreading throughout the country, but the cases are not correctly registered since they are presented as an acute respiratory infection.

The experts explained that most of the cases are probably of medium to moderate severity, which would impact 80% of the affected population.
Victor Hugo Borja Aburto, director of medical benefits at the IMSS, said the institute is applying strategies to reduce the exposure of high-risk personnel, which is why some 20,000 workers, including 9,000 doctors and nurses, have been dismissed. 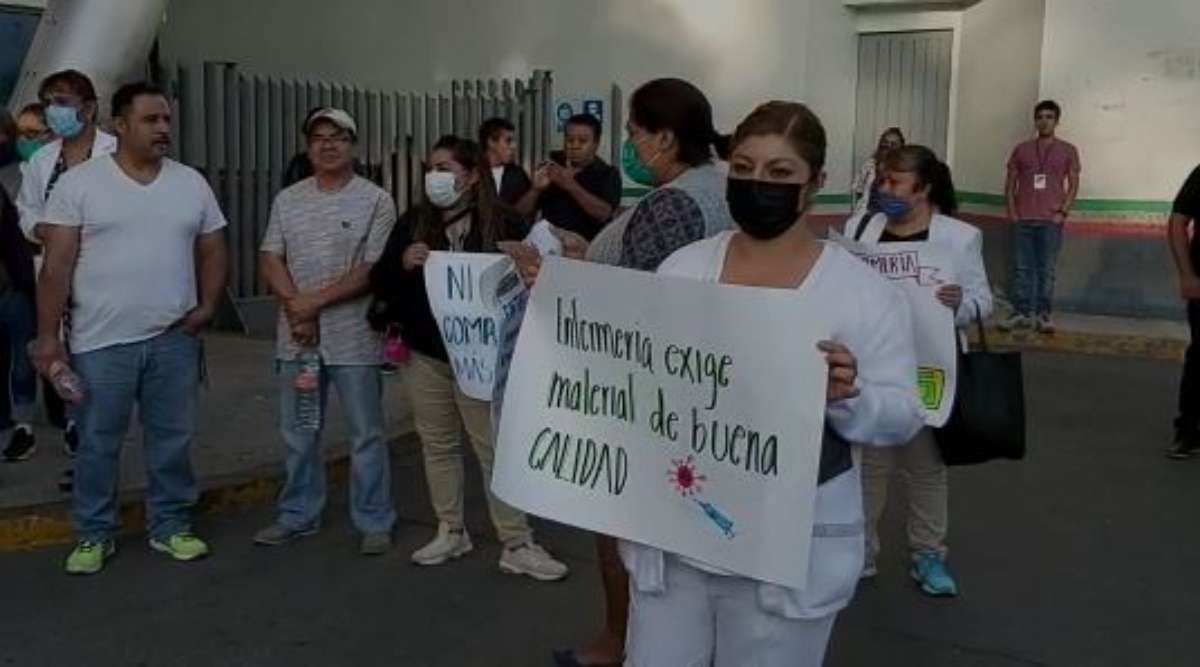 He also said a bonus of up to 20% of the salary would be given to workers whose tasks are related to the care of people infected with Covid-19.
Better news came from health workers in Michoacán, where Governor Silvano Aureoles Conejo announced a 60% increase in the salaries of doctors and nurses who are in charge of the care of Covid-19, as “an act of justice and recognition.

In Yucatán, medical students from various faculties decided to stop providing their social service in hospitals – especially those of the IMSS in the interior of the state – for lack of adequate equipment to protect their health.

The health crisis in Mexico is becoming increasingly evident, except for the López Obrador government, which refuses to address it.

A cry for help came from northern Mexico on Monday. Jaime Bonilla, the governor of the state of Baja California and part of AMLO’s party MORENA,  warned this morning that the doctors of the Mexican Social Security Institute (IMSS) “are falling like flies” because the federal institution for which they work did not give them the necessary protection to face the covid-19 epidemic.

The warning from the local leader, from Morena, the governing party, once again underlines the diﬁcultades entities are having to fight the virus with little input and an evident lack of coordination between federal and local authorities.

Baja California is the third state with more positive cases of SARS-CoV-2 despite being the 14th in population. As of this Monday, there were 335 infected and 25 dead. The situation is very different from that in neighboring California, in the United States, which had 24,139 positive cases and 727 deaths reported on Monday.

The commercial and personal flow between these two regions have made the numbers of infected in Baja California higher than in other entities. Local authorities have shown concern about the resources they have to deal with the epidemic.