At the dawn of the conquest of New Spain, a sailor records the sighting of 3 mermaids’ tails breaking the surface of the ocean. The year is 1493 and the man is Christopher Columbus – although the mermaids, it turns out, are in fact not mermaids at all, but manatees, an amazing, unique creature we now know as among the most reclusive, gentlest creatures of our oceans and waterways.

The Yucatan Peninsula, its coastline and many of its rivers, are considered home by the manatee, which lives up to a remarkable 40 years of age, mostly in solitude or in pairs. Beyond the peninsula but still in the Americas, its coverage extends from Florida to Brazil, with particular sub-species living high up the Amazon. They are at once – incongruously – so big and yet so rare to see, growing up to 13 feet and weighing 200 to 600 Kg (450 to 1300 pounds), but most of what we ever come to see is its gently swishing tail, hence the historical misconception with mermaids.

Widely regarded as the ‘sea cow’ due to its voracious appetite for seagrass, weeds and algae, its fundamental role in the ecosystem is undeniable as it grazes on over 60 varieties of aquatic plants, successfully recycling key nutrients for primary vegetation growth on the sea bed. However, not to be fooled by their size and appetite, the manatee is a graceful swimmer that can glide up to 15 miles an hour in the fresh or salt waters of its surroundings. Its curious and tranquil nature, which often leaves them vulnerable to human activity, has in the past led them to approach divers as they enjoy and relate with human interaction.

This calm and relaxed behavior also puts them at risk to human activities on the water. In 2019, 606 Manatee deaths were recorded near Fort Lauderdale, not only as a cause of toxic algae, but from collisions with motor boat propellers and fishing nets. It’s estimated that the Caribbean manatee, what would have been witnessed by Christopher Columbus all those centuries ago, will decline by more than 20 percent in coming generations. With approximately 2500 mature and sexually reproductive manatees of this subspecies remaining in our oceans, this figure is a census of deep concern, with numbers indicating a species on the verge of collapse. 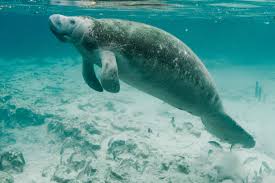 It’s not all bad news, however as numerous conservation projects in the region are ploughing their efforts into protecting the species. One organisation in Belize, Wildtracks Rescue, is an example to follow in its efforts to rehabilitate young calves and adults. Having recently featured on a BBC documentary in the UK for its commitment to the species, its network of biologists and vets work tirelessly to nurture them back to health from boat collisions and net entanglements.

Similarly, to the north, the Florida Fish and Wildlife Conservation Commission (FWC) continues its conservation work in line with the Florida Manatee Sanctuary Act (1978), by creating buffer zones to limit the speed of boats, through education programmes, and research and rescue facilities – and perhaps most importantly, in this way generates a best practise model from which other areas can operate.

However, despite such positive initiatives, manatees remain critically endangered. Whilst the number of deaths dropped in Florida between 2018 and 2019 from 825 to 606, there is little way of knowing what influenced this decline, putting into question the success of this act. It must also be noted that this act does not take into consideration the contamination from agricultural activities that seeps into manatee habitat.

Of course recently the massive reduction in boat traffic caused by Covid-19 restrictions has led to a sudden reduction in collisions, which only emphasises the danger that human activity has been posing on these creatures. But as with everything else related to our unusual present, perhaps the current normal offers us a window in how things might best be after we emerge from the present crisis, more measured and responsible in everything we do with nature. It’s a hope that you can see conservationists thinking, but not daring to utter.

Rhona Macdonald is a conservationist currently pursuing an MSc in Sustainability and Environmental Studies at the University of Strathclyde, Glasgow. Recently she has been focusing her work on sea turtle conservation in the Yucatan Peninsula.