MEXICO (Banxico/SinEmbargo) – For the first time in a year, analysts consulted by the Bank of Mexico considered that economic conditions abroad, including casualties caused by the coronavirus pandemic, are the most considerable risks to Mexican economic growth.

The group of analysts consulted by the Bank of Mexico once again cut its annual economic growth prospects (GDP) down from 0.91 to -3.99 percent. The drop in expectation was due to external and internal economic factors, with the weakness of the external market and the world economy being the main reason for mistrust due to the health crisis left by the COVID-19 pandemic.

The Bank of Mexico collected the survey from 38 economic analysis and consulting groups from the domestic and foreign private sector. Responses were received between March 24 and 27.

The analysis highlighted that uncertainty in Mexico is caused internally.

-Real GDP growth expectations for 2020 were lower than in the previous survey. For 2021, the outlook for that indicator increased from the previous month.

-Expectations for the level of the exchange rate of the peso against the US dollar for the 2020 and 2021 closings were revised upwards compared to February. 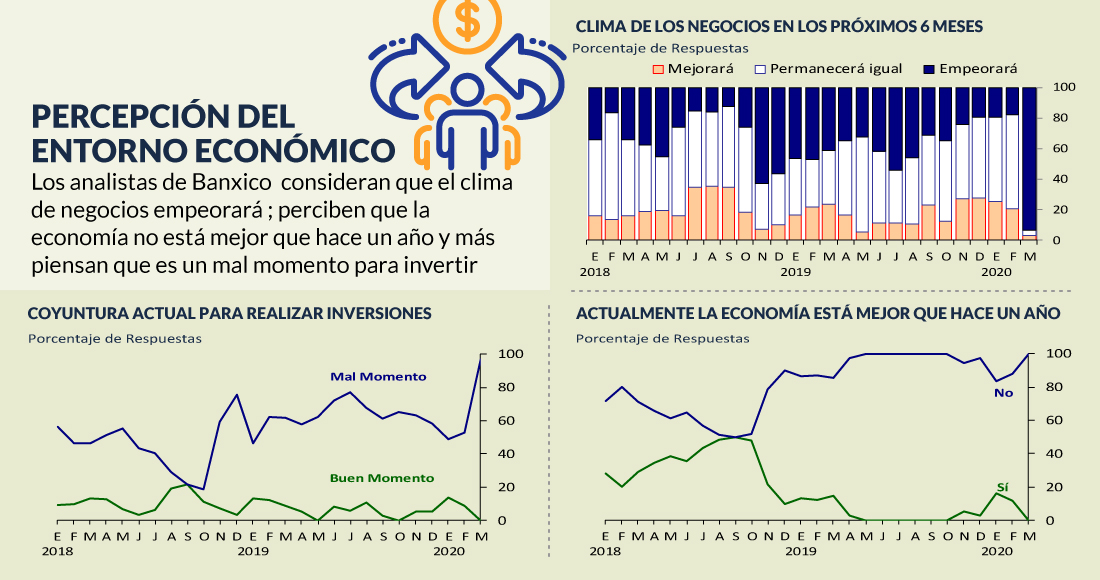 BUSINESS CONFIDENCE
The confidence of Mexican businessmen from different sectors such as manufacturing, construction, commercial, or non-financial private services has fallen over the last year, and last March cut 6.5 percent on average. According to business confidence indicators of February, released on Monday by the National Institute of Statistics and Geography (Inegi), entrepreneurs in the business sector have a confidence of 45.3 points over 100, being 8.5 percent lower than the same month in 2019.

The 57.3 points – a fall of 3.5 percent compared to the same month last year – obtained by the vector “Future economic situation of the country” stand out negatively. About the right time to reverse confidence fell 14.8 percent to 19.8 points.

The Construction ECI obtained 44.9 points in February, 4.6 percent less than in March 2019. In this item, the vector “Future economic situation of the company” obtains 60.3 points. However, the “Right Time to Invest” vector has only 24.2 points.

For the Manufacturing sector, it was 44.4 points compared to more than 50 points in the same month last year, with a drop in all sub-indices.

BUSINESS EXPECTATIONS
The Business Expectations (EE) released by the Inegi during March showed decreases in all indicators of the commercial sector. The manufacturing, construction, and trade sectors had a trend towards negative results at an annual rate.

Former Secretary of Treasure Carlos Urzúa predicts Mexico’s GDP will fall 6%; and calls for more public spending. Six out of nine of the manufacturing sector indicators decreased, the highest drop (-8.5 points) was the domestic demand for its products, followed by exports (-6.9) and production (-6.8).

All four indicators of the construction sector declined, the main decrease (-8.5 points) was the value of works executed as main contractor (-5.6 percent), followed by those elaborated as subcontractor (-5.4) and total contracts and subcontracts (-2.1).

According to the Private Sector Economics Specialists’ Expectations Survey of January, by 2021, average inflation expectations were revised upwards from 3.53 percent in December to 3.61 percent.